Before Vincent Price haunted houses, he chalked up plenty of experience as a Broadway star and a versatile character actor. This superb Joseph L. Mankiewicz gothic romance assigns him major leading man duty as a ‘dark and troubled’ soul — the kind that intimidates cowering leading ladies. With typical good humor, Price called it the first of his ‘dead wife’ movies! 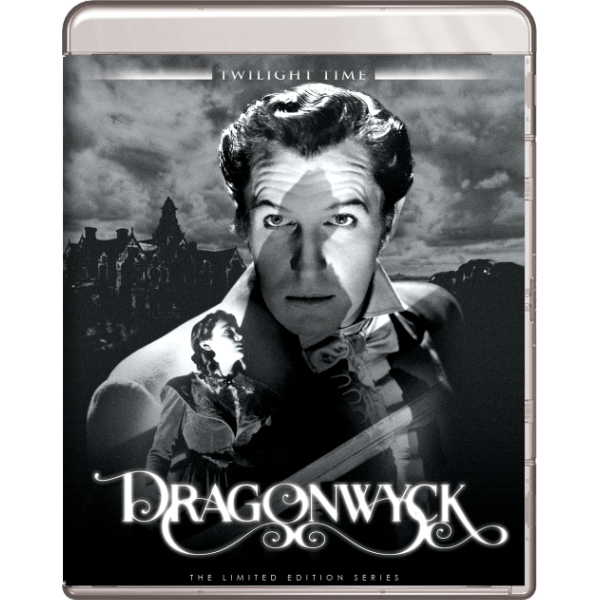 You’d have to say that Vincent Price’s film work was hit and miss until the middle 1940s, when his career took off at Fox under Zanuck, Preminger and Joseph L. Mankiewicz. Were it not for this gothic melodrama born of ‘women’s fiction’ he might have remained solely a versatile supporting actor instead rising to specialized leading man status. Price was certainly perfect for a genre concerned with trembling maidens, brooding bridegrooms and the ubiquitous haunted portrait over the fireplace mantle.

Writer and producer Mankiewicz became director Mankiewicz on Dragonwyck, a finely crafted, highly entertaining romantic mystery a year that Hollywood was still enjoying revenues at a Golden Age level. The show could also be taken as a vehicle for Fox’s top draw Gene Tierney, the gorgeous Queen of the Overbite who became a star two years before in Otto Preminger’s Laura. The formidable Walter Huston gets second billing for a strong supporting part, but the film’s central character is actually the third-billed Vincent Price. It’s a standout role for Price, and the one that most resembles his future persona in high-class horror films. All that’s missing is the Price sense of humor.

The story plays out like classic gothic Americana. Connecticut farm girl Miranda Wells (Gene Tierney) receives an invite from her relative Nicholas Van Ryn (Vincent Price) to come to upstate New York to serve as a houseguest and governess. Miranda follows the teachings of her god-fearing father Ephraim (Walter Huston) but also dreams of romance and luxury; her loving mother Abigail (Anne Revere) thinks she should follow her dream. The Van Ryn estate is in a politically divided district where landed Dutch patroons lord it over tenant farmers. Miranda finds Nicholas distant but also polite and thoughtful. His mostly bedridden wife Johanna (Vivienne Osborne of Two Seconds) is a neurotic who eats too much. Daughter Katrine (Connie Marshall) is a joyless child. All three of the Van Ryns are haunted by a strange portrait and a suicide in the family’s past. The morbid connection seems to please Magda, the housekeeper (Spring Byington).

Through the local doctor Jeff Turner (Glenn Langan) Miranda discovers that Nicholas is unpopular with the locals, who impatiently await new state regulations to outlaw the feudal-like patroon system. At a patroon picnic, Dr. Turner must restrain angry tenant farmer Klaas Beecker (Harry ‘Henry’ Morgan) from attacking Nicholas. Dr. Turner is immediately attracted to Miranda. Her situation becomes more difficult at a party when she bridles at the class snobbery. It’s also clear that Nicholas is attracted to Miranda. He shocks his his fellow patroons by dancing with her, while his wife Johanna watches. How many supermarket bodice-ripping novels have we seen with titles like ‘Dragonwyck?’ Backed by some of the best artists in the business, including un-billed producer Ernst Lubitsch, Mankiewicz transforms a page-turner into an exceptionally good movie experience. The sets and costumes never overpower the performers, who stay stage center at all times.

Vincent Price blooms under some of the best direction of his career. Nicholas Van Ryn is more delicately shaded than the usual Byronic brooder in film, even Fox’s recent Rochester performed by Orson Welles. In no way a standard villain, Van Ryn’s dark side doesn’t express itself for quite a while. Initially well mannered to a fault, he soon reveals his essential bigotry and sense of noble entitlement — that Americans were supposed to leave behind in the Old World. Yet Nicholas remains a charmer Miranda’s attraction to him seems more reasonable than that of the heroines of Jane Eyre or Rebecca.

Non-star Glenn Langan is solid as the doctor who we suspect will be waiting patiently for Miranda, like Gabriel Oak in Far from the Madding Crowd. We might know Langan from Forever Amber but he ended up being immortalized by monster fans as The Amazing Colossal Man. The rest of the cast could not be improved. Walter Huston raises the theme of Bible morality, which has an important role to play in the film’s strongest character reveal. As the unwanted wife, Vivienne Osborne projects a constant insecurity. Spring Byington’s creepy maid Magda is sort of an anti-Mrs. Danvers character — instead of outright menace, Magda offers unwanted opinions and advice with a conspiratorial smile. Ms. Tierney comes off as intelligent and focused. Most ‘worried wives’ in these things cower and simper, but the uncommonly strong Miranda withstands all of the negative influences around her. She even prevails in her choice of maids. Peggy O’Malley (Jessica Tandy) has a bad leg, and Miranda gets her way even though the prejudiced Nicholas despises deformities.

The only aspect of Dragonwyck that writer-director Mankiewicz doesn’t resolve well is the haunting angle. The movie insists that both little Katrine and Nicholas hear haunted music and voices. We hear them too, but as Miranda does not, I interpret the mystery sounds as psychological in origin: various occupants have succumbed to the group superstition and gone slightly loony. Yet critics keep insisting that a real supernatural component is present. Perhaps Mankiewicz did the right thing making it ambiguous.

Although it doesn’t bother us now, the way Dragonwyck fails to resolve the unhappy Katrine character was odd for a 1946 studio picture. It’s equally unusual for a movie of the time to leave the welfare of a child hanging, especially with the supernatural involved. I doubt that Miranda is going to abandon Katrine, but we still wonder what the future holds. Will the girl escape from her boarding school and make her way to Connecticut for familial revenge? She is Vincent Price’s daughter, after all. The censors would be appeased, because the overt message is that Miranda’s Christian devotion makes her immune from ghostly nonsense. Mankiewicz handles this theme very cleverly, to tie in with the darkening of Nicholas’ character. He’s haughty, domineering and arrogant, but when he openly asserts that he has no use for God, we know he’s not likely to be redeemed. It’s unfortunate that so much of the criticism I’ve read on Dragonwyck condemns Nicholas for being an atheist. He doesn’t deny God, he defies him, and therefore acknowledges God’s existence.

Some critics of the day didn’t like the film’s description of the patroon system with its land renters. To me it gives the story a backbone, anchoring Nicholas’ crazy aristocratic hauteur in historical fact. I’d be curious to know what the difference is between the Dutch system that New Yorkers were eager to dissolve, and ordinary sharecropping that, for all I know, is still the norm elsewhere in the country. The interesting casting of Price is what makes the movie work. Audiences of 1946 wouldn’t necessarily expect him to be playing a villain. Nicholas Van Ryn now seems a more refined precursor of Roderick Usher and other demented Price horror characters. One slight flick of an eyebrow, and we know this Dutchman is up to no good.

Part of the pleasure of watching Dragonwyck is its near-perfect production design. All we see of New York is the interior of a hotel, but the traffic going by outside suggests that an entire city is present. Miranda’s trip up the Hudson river uses an excellent miniature of a packet boat — and all the rear-projected images of the shoreline are large-scale studio miniatures as well. The Twilight Time Blu-ray of Dragonwyck really kept my attention. The HD transfer is quite attractive in picture and audio; I found the rendition of Arthur Miller’s cinematography to be rich and expressive. Alfred Newman’s great music score can be heard on an isolated track; its dynamism sometimes recalls Newman’s work on the previous year’s Leave Her to Heaven. Does the fact that the opening music overlaps the Fox logo, pre-empting the usual fanfare, mean that Darryl Zanuck was especially proud of this one?

Twilight Time comes through with some fine extras. Two featurettes on the film and Gene Tierney are accompanied by an older Biography TV show on star Vincent Price. Both of the radio show versions of the movie are included.

Of particular interest is a commentary taken from a 2008 Fox disc, Fox Horror Classics Volume 2. The esteemed Steve Haberman and Constantine Nasr delve into every aspect of Dragonwyck. They offer a fresh take on Vincent Price even as they continue to praise his horror pictures. We also get the full lowdown on the rocky situation between Ernst Lubitsch and Mankiewicz at Fox. Lubitsch was at first meant to direct until health problems slowed him down, and his relations with Mankiewicz weren’t much better than he had with Otto Preminger. Mr.’s H and N tell us that Gregory Peck was first considered for the Nicholas Van Ryn role, before Vincent Price auditioned to win it. Apparently nobody knew that Price could do ‘dark.’

I listened to this commentary all the way through, with interest. Since we hear nothing of the oft- mentioned tale that Dragonwyck was once intended as a vehicle for Laird Cregar prior to the actor’s death, I’m wondering if that whole story is apocryphal. Our commentators’ research seems more than thorough.

The good liner notes are by TT’s own Julie Kirgo. She notes the editorial career of Dorothy Spencer, an unsung talent who is never mentioned when critics praise the cutting in the films of the ‘auteur’ directors whose films she edited. The lobby card reproduced on the back of the insert pamphlet is really weird — the image that should be Gene Tierney looks exactly like Fox actress Linda Darnell.