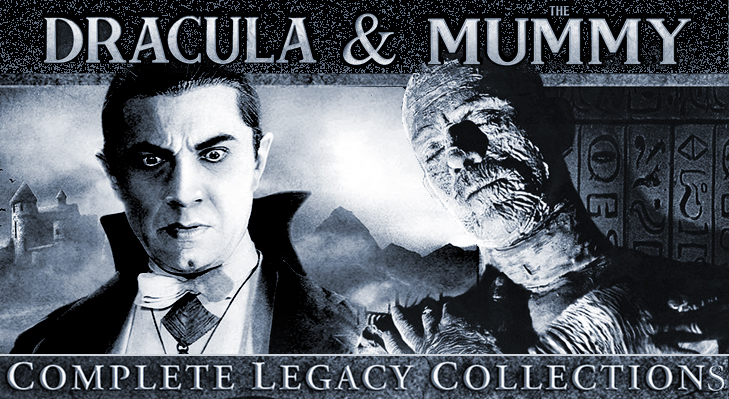 The 2016 blu ray release of the Frankenstein and Wolf Man Legacy Collections was a moment of celebration for movie and monster lovers everywhere, bringing together all the golden age appearances of Frankenstein’s misbegotten creation and Larry Talbot’s hairy alter-ego. Universal Studios treated those dusty creature features to luminous restorations; from Bride of Frankenstein to She Wolf of London, these essential artifacts never looked less than impeccable and, at times, even ravishing. Colin Clive’s frenzied declaration, “It’s Alive!”, never felt more appropriate.

Now Universal has turned their attention to their other legendary franchise players, Dracula, the sharp-dressed but undead ladies’ man and Im-ho-tep, the cursed Egyptian priest who loved not wisely but too well. 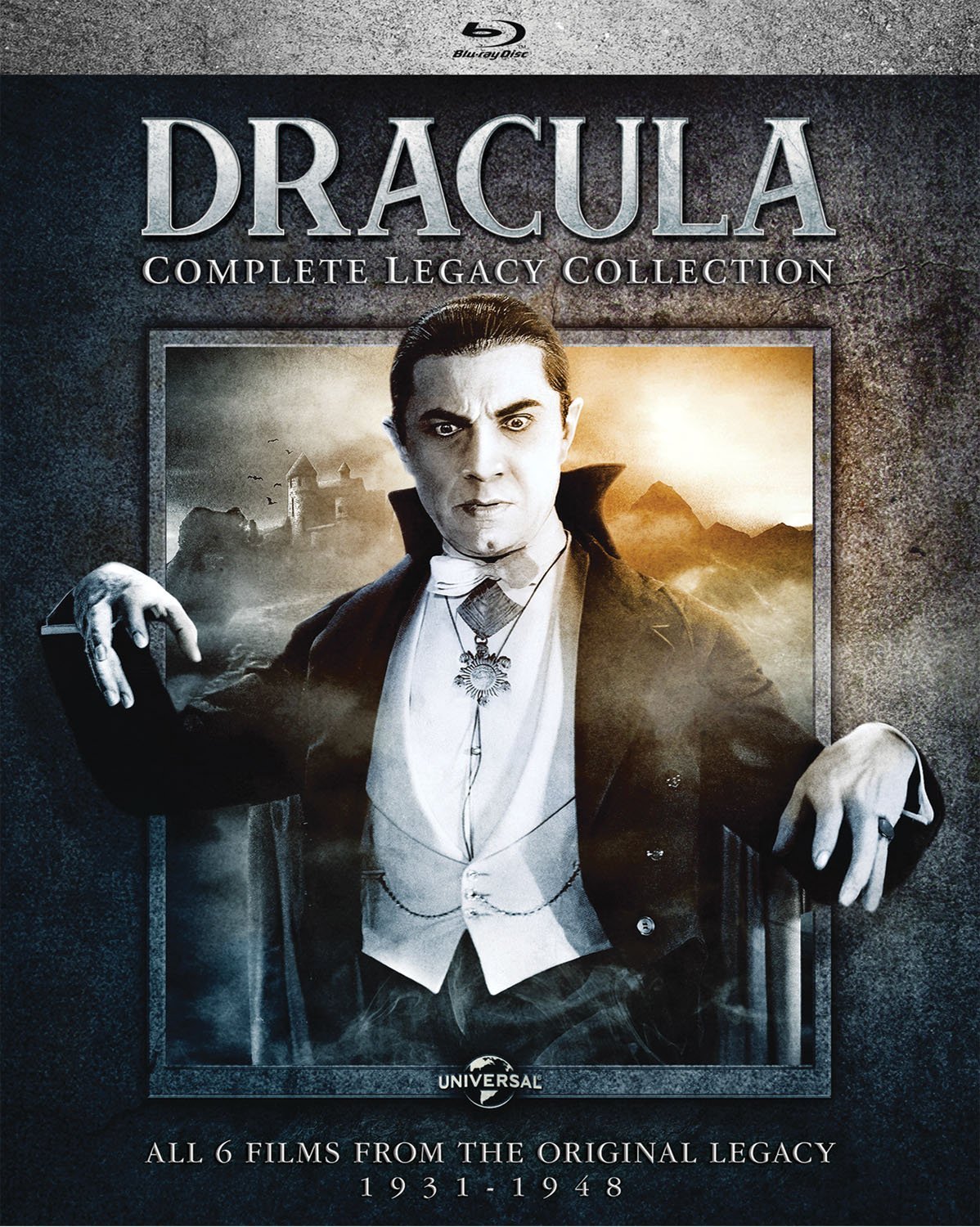 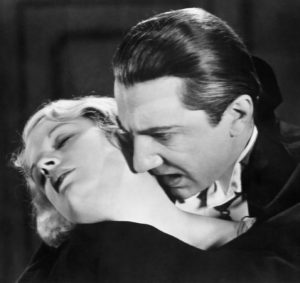 Dracula, Tod Browning’s sanguinary fable was, along with Frankenstein, one of the most influential films ever produced. Though Bram Stoker’s source novel was a model of eerie understatement, for the demure moviegoers of 1931 Browning’s film was seen as a blood and thunder sideshow (“Its daring will ASTOUND you! Its suspense will chain you to your seat!”) Produced during the shaky transition from silent to sound film, Dracula has gained undeniable power over the years perhaps because, in contrast to the over-caffeinated editing of contemporary popular cinema, it seems ever more worthy of the art-house thanks to its turtle’s pace and absence of theatre-shaking sound effects and musical score.

Escaped from the Hungarian revolution by way of Germany, Bela Lugosi brought built-in outsider qualities to the role of the cursed count and his straight-backed head-waiter’s facade, combined with his halting delivery, seemed a natural by-product of his refugee status. As a result he was sinister yet also oddly touching, his career-long struggles with the English language never more pronounced than in a film where everyone else is speaking in the clarion cadence of stage bound costume drama. Premiering the Friday before Valentine’s Day in 1931, Browning and Lugosi’s collaboration was an enormous success. What a blow it must have been to the proud Hungarian when, as the sequels to Dracula began to accumulate, he was left by the sidelines.

There were to be many of those sequels along with reboots of Frankenstein and the rest of Universal’s monster squad and though the studio took their time cashing in, when they did, there was no stopping them. For the next two decades, German émigrés like Curt Siodmak, Irish-born Roy William Neill and midwesterners like Lambert Hillyer, dreamed up uniquely American mythologies in the humid melting pot of San Fernando Valley. 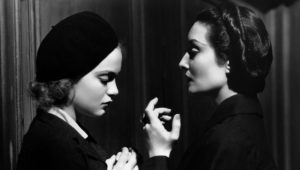 Directed by Hillyer, Dracula’s Daughter features some intriguingly opaque vamping from the statuesque Holden and a barely-there lesbian subplot with kewpie-doll Nan Grey as an ill-fated artist’s model. But the plot allows the monotonous Kruger too much lounging time at swell-egant soirees more appropriate for an Astaire-Rogers movie and the film dawdles toward the finish line with rehashed plot points from the ’31 classic. Fortunately the next salvo in Universal’s Dracula revival would be delivered by those pros from Dresden, Robert and Curt Siodmak.

Directed by Robert Siodmak, written by his brother Curt and starring Lon Chaney Jr., Son of Dracula is a quirky and unpredictable work of real imagination, a constantly surprising take on what was in 1943, an already musty classic. With the inveterate brawler Chaney in the driver’s seat, Dracula is no longer the cultivated, circumspect ghoul haunting opera houses but an unmannered mob boss stuffed in evening clothes. The film was sandwiched between director Siodmak’s 1943 soap opera Someone to Remember and his frantically entertaining spin on noir, the 1944 Phantom Lady, starring the stunning Ella Raines whose bedroom eyes and ebullient personality gave her a cryptic good girl/bad girl aura that was both sexy and a little unnerving. 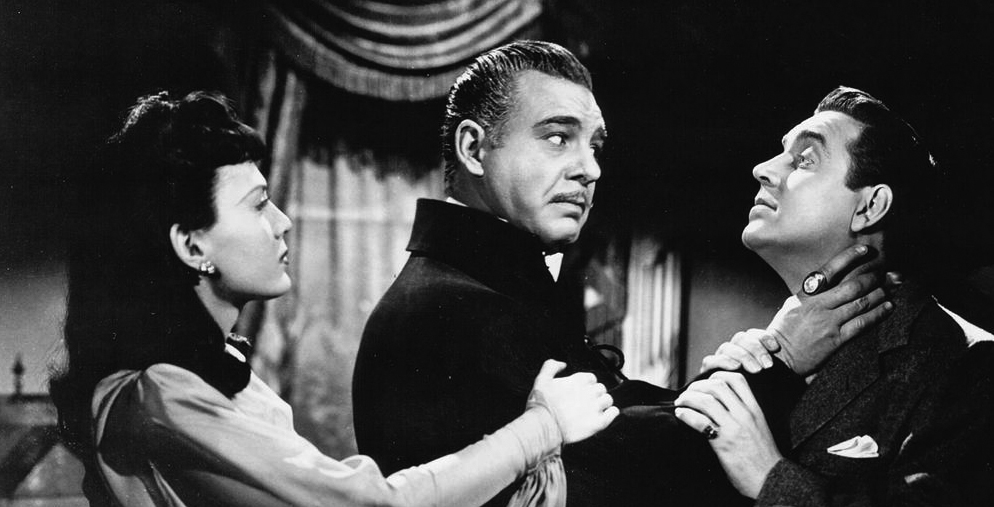 Son of Dracula features something of a dry run for Raines’ character in the person of the beautiful but sinister Louise Allbritton as the duplicitous virago who, along with Chaney and Robert Paige as Allbritton’s hapless fiancée, form the perverse love triangle at the center of the film. Allbritton is never less than compelling as she double and triple-crosses every man or vampire that dares to cross her path and, unlike the pre-code Dracula’s Daughter that dances around its kinkier elements, the brothers Siodmak give full advantage to Allbritton’s supernatural two-timer – this gold digger isn’t after money, but eternal life.

Dracula’s next appearances found him reduced not only in stature but in screen time, appearing as a bit player in the fast-paced carny rides of 1944’s House of Frankenstein and 1945’s House of Dracula. Each of these films was directed by Erle C. Kenton and both are notable for their breakneck pacing and improbable (to put it mildly) plot twists, cramming all of Universal’s marquee monsters into one all-star Götterdämmerung with an average running time of just over an hour.

The top-hatted John Carradine, with his honied intonations, introduced a soupçon of Shakespearean stature to the proceedings and though Lugosi is missed, it should be remembered that the mustachioed Carradine, gaunt and grey-haired, was the actor that most resembled Stoker’s original vision. That classic Universal version of Dracula, austere, courtly, and with a sense of humor as dry as the wine he would “never” drink, would meet his end hobnobbing with Abbott and Costello of all people. 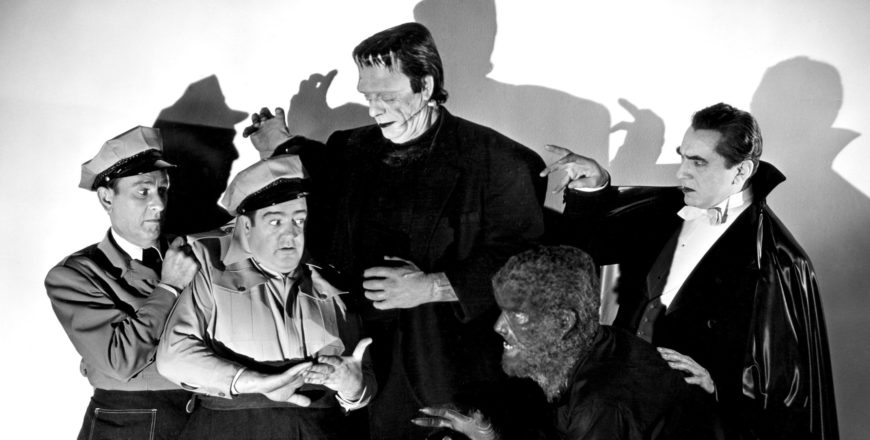 Directed by Charles Barton from a script by Robert Lees, Frederic I. Rinaldo and John Grant, 1948’s Abbott and Costello Meet Frankenstein is the ne plus ultra of comic horror films with a dexterous plot that unites the beloved comedians and creatures in a way that makes dramatic sense while leaving breathing room for Abbott and Costello to revisit some of their most tried and true set pieces. The story, about Dracula’s scheme to revive the Frankenstein monster in a swamp-bound castle off the coast of Florida, seemed to have revived the comedians too. Literally running from one crackerjack vaudeville routine to another, Bud and Lou’s timing was never more impeccable. 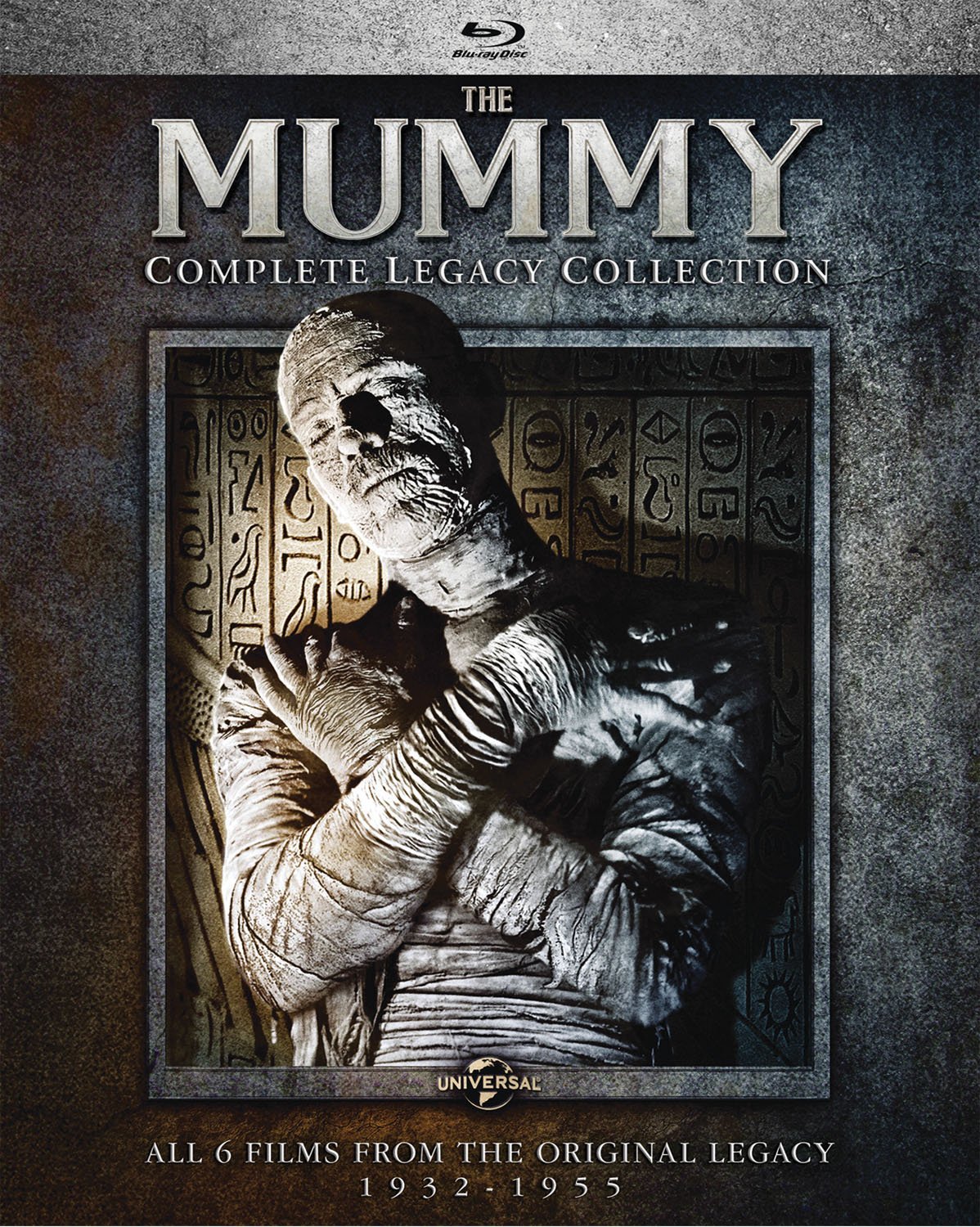 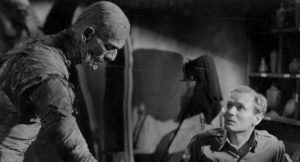 Inspired by the media hubbub surrounding the discovery of Tutankhamun’s burial ground in 1922, Universal screenwriter John L. Balderston was tasked to expand that rather dry historical event into a pulpish thriller to be directed by Dracula’s cinematographer, Karl Freund. Freund cast Boris Karloff in the title role and Zita Johann as Helen Grosvenor, the object of desire for Karloff’s reanimated Romeo. Released in 1932, The Mummy opens as the mummified body of Karloff’s Egyptian priest, unearthed by stalwart archaeologists Edward Van Sloane and Arthur Byron, is inadvertently resuscitated by an over-zealous assistant. The last we see of the now ambulatory corpse are the wrappings trailing from his feet as he shuffles off screen. He returns years later in barely human form as Ardath Bey, a rail-thin wraith with a malevolent gaze trained on the unsuspecting Johann, a morbidly introspective debutante who happens to be the reincarnation of Ankh-es-en-Amon, the wife of Tutankhamun. 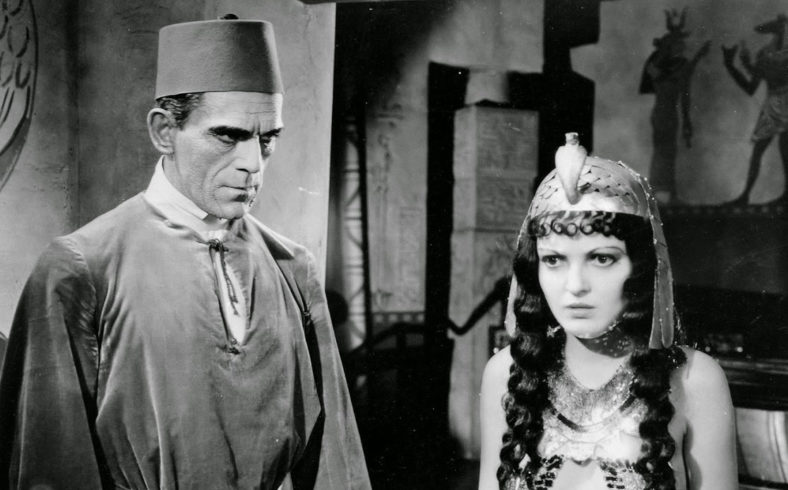 The malignant Karloff, with his centuries old craving, is brilliant as the lovesick Bey, but the genial Englishman might not have disagreed that makeup artist Jack Pierce deserved some sizable credit for his performance as the crumbling mummy and its brittle-skinned alter-ego. Though how Pierce could assemble such extraordinary make-up for Karloff in a film where Arthur Byron’s toupee seems to have dropped on his head from a third story window is anybody’s guess.

There were four sequels to the Karloff classic released between 1940 and 1944 and each followed a fairly strict template established by the first in the series, The Mummy’s Hand, starring Dick Foran and cowboy star Tom Tyler as the mummy (now called Kharis). George Zucco co-stars as a surrogate Egyptian priest who revives the dormant mummy and dispatches him across the Universal backlot on a vengeful killing spree. Starting with 1942’s The Mummy’s Tomb and for the remainder of the series, Universal’s most loyal trooper Lon Chaney Jr. played the implacable (and conveniently silent) Kharis while Zucco, John Carradine, and Turhan Bey would each take turns as the sinister minister who weaponizes the shambling creature to do their dirty work.

Shot on the cheap, unconcerned with the understated dread of Freund’s original and pumped up with enough stock footage to push the running time over the one hour mark, the four Mummy sequels nevertheless have some uniquely macabre plot twists (the creepy mummifications of the fresh-faced leading ladies in The Mummy’s Ghost and The Mummy’s Curse come to mind) and most of the films exterminate even the most likeable characters with unnerving glee. 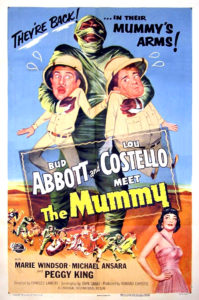 Glee was something lacking in the “classic” Universal mummy’s final appearance in 1955’s Abbott and Costello Meet the Mummy. It was the final film in the beloved duo’s series of horror farces that included dust ups with the Invisible Man, Jekyll and Hyde and even a trip to Mars. By this point the wind seemed to have gone out of their sails and even the mummy himself, for decades a slow-moving but unstoppable force, seemed exhausted. And what a comedown for the stately Im-Ho-Tep. Yes, it’s a baggy pants vaudeville show but that doesn’t mean the mummy’s trousers should be baggy too… so exquisitely tailored by Jack Pierce in 1932, this mummy is relegated to a zip-locked rubber ensemble designed by Pierce’s replacement, Bud Westmore.

Once again the wizards at Universal Home Video have worked their magic on a fraternity of films whose youngest member is 62 years old. Each movie, from the already released Dracula to new-to-blu ray films like Dracula’s Daughter and Son of Dracula, look absolutely stellar with velvety black shadows and sharp detail.

Aside from the obvious pleasure of having these movies in such great condition, these sets stand as a significant testament to the artists who worked in Universal’s studio system, in particular the cinematographers like George Robinson and art directors like John B. Goodman and Martin Obzina who, it’s now clear, helped make even the most hastily filmed productions (I’m looking at you House of Frankenstein) seem like artfully crafted A pictures.

Universal has included all the extras from the previous Universal Monsters: The Essential Collection including the extensive documentaries The Road to Dracula, Mummy Dearest: A Horror Tradition Unearthed and Abbott and Costello Meet the Monsters plus biographies of Bela Lugosi and Jack Pierce and commentaries from in-the-know luminaries like David J. Skal, Steve Haberman, Gregory Mank and Rick Baker.