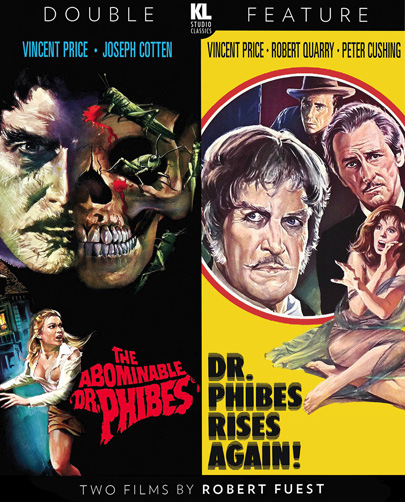 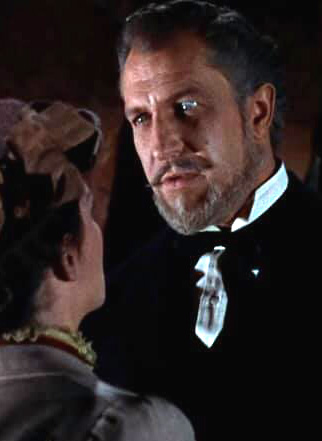 Though he thrived in light comedies and upmarket melodramas, Vincent Price didn’t really find himself till he found Henry Jarrod, the high strung sculptor-turned psychopath in 1953’s House of Wax. The role reinvented the Jekyll/Hyde story and gave Price the key to his long-lasting persona; the well-mannered fiend and the unhinged romantic merged into one tormented soul. Ticket buyers were both moved and terrified by Jarrod and the box office receipts reflected their fascination. Price was happy to dish up more of the same (1954’s The Mad Magician, was a virtual remake) and though he would occasionally play no nonsense villains like the unambiguously evil Matthew Hopkins of 1968’s Witchfinder General, the actor rarely strayed too far from his comfort zone.

There was a reason for that; Price struggled during the production of that film as director Michael Reeves reined in the actor’s natural tendency to wink at the audience. Reeves’ tenacity paid off, Witchfinder General—a merciless experience—is regarded by many as Price’s finest hour. Still, once out from under the taskmaster’s thumb, a liberated Price was back to his winking ways; there was no scenery left unchewed in 1969’s The Oblong Box and in 1970’s loopy Scream and Scream Again, he resembled a human whoopee cushion. 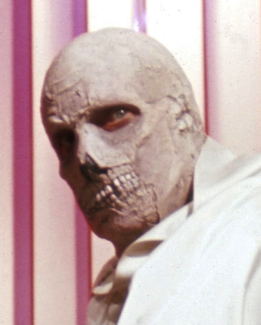 The following year Price signed on for a flamboyant black comedy set in The Jazz Age of the 1920s. And he found himself reined in yet again… not by his director, but his make-up man. As the two-faced avenger in The Abominable Dr. Phibes, the actor’s head is encased in a grimacing skull-helmet worn under yet another mask that represents his “normal” face. So much for “normal”—that ghostly kisser is right out of a mortician’s make-up kit; powdered cheeks, blood red lipstick, and a toupee that would fool no mourner. Phibes is in essence a living cadaver; unable to speak till he plugs a microphone directly into his neck, he’s retro-fitted with gears and electronic components like an Art Deco RoboCop. 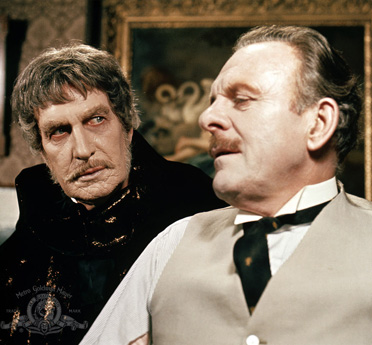 Though he’s held together by spit and wire, Anton Phibes has his playful side—he murders his perceived enemies with the help of elaborate killing machines, ornate contraptions seemingly designed by a sadistic Rube Goldberg fan; a frog mask that slowly strangles its wearer, a cold air machine that turns its victims into icy snowmen, and a spring-loaded unicorn suitable for impaling your favorite enemy.

If you’re paying attention you’ll notice Phibes is not a particularly social animal, he only ventures from his mansion in order to wreak havoc, otherwise he’s holed up in his music room where he serenades his partner in crime, an ethereal—and silent—beauty named Vulnavia (played by Virginia North). The rationale for Phibes’ crime spree is found in his victim’s shared profession; they’re all doctors and nurses who attended to Phibes’ dying wife—and as she succumbed, the grief-stricken Phibes raced to her side only to be immolated in a fiery car crash. Now skinless but rejuvenated, The Abominable Dr. P. is ready to rumble. 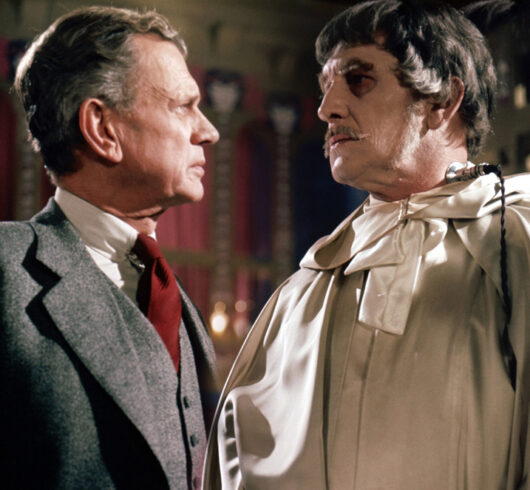 According to Renoir, the awful thing about life is “everyone has their reasons.” Phibes’ rationale for living is forged in revenge: he fancies himself a righteous man spurred by a biblical fury; each of his killings is based on the plagues of Egypt; bats, bees, locusts, and other creepy crawly horrors. Phibes picks off his antagonists like ducks in a shooting gallery—and the film wastes no time either (its one of its saving graces); the victims, including Terry Thomas, Maurice Kaufmann, and Susan Travers, are given a short moment to establish their characters and then meet their fate—except for Joseph Cotten who plays Dr. Vesalius, the head of that unlucky surgical team; Phibes’ fiendish machines are not for him but instead for Vesalius’s son. That scene, with Cotten sweating against the clock to save his offspring, is a ticking time bomb of suspense and the centerpiece of Phibes’ most ghoulishly contrived execution. 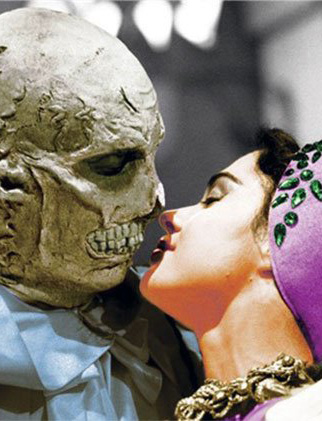 The retro charms of The Abominable Dr. Phibes—its production design could be based on a the work of Czech painter Alphonse Mucha who embodied the film’s Art Nouveau leanings—are on display from the start; the graceful curlicues of the title sequence extend into Brian Eatwell’s macabrely elegant art direction for Phibes’ lair—if Oscar Wilde were a Batman villain, this is where he’d live.

And like the gilt-edged beauty of those designs, the film’s meaning, as much as there is one, rests entirely on the surface, it’s a completely sensory experience; even Phibes himself is an artifact, just one of the horrors on display in this updated House of Wax. Directed by Robert Fuest and written by William Goldstein and James Whiton, The Abominable Dr. Phibes is a laundry list of amusingly morbid shocks—though it’s repetitive and predictable, its deadpan style is winning and somehow comforting, reminiscent of one of Edward Gorey’s spooky storybooks for children. 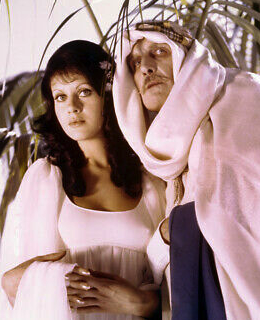 The Abominable Dr. Phibes has style to burn and its sequel, Dr. Phibes Rises Again, proved style will only get you so far. Phibes and Vulnavia are back, each revived from suspended animation and on their way to Egypt in search of a life-giving elixir. The plot offers up a worthy bunch of sacrificial lambs for Phibes plus a bona fide rival; Robert Quarry plays Darius Biederbeck, a centuries-old occultist who shares Phibes’ interest in the Egyptian River of Life, the secret to an everlasting existence. It’s a juicy premise but the bloom is off the rose, if not Price’s cheeks (and he looks grand in Lawrence of Arabia drag). There’s a lot more plot in Rises Again but “more” somehow feels like less—and the studio-set desert scenes are a poor substitute for Eatwell’s elegant interiors. The film is not without its pleasures, Terry Thomas returns, Fiona Lewis makes a lovely consort for Biederbeck, and there’s a welcome—if far too brief—cameo from Peter Cushing. And there’s always Vinnie whose joy, even under a saddlebag of makeup, is unconfined.

Both Fuest and Eatwell returned for this reunion and thanks to them and their gifted cinematographers, Norman Warwick (Dr. Jekyll and Sister Hyde) and Alex Thomson (Boorman’s Excalibur and Branagh’s Hamlet), these extremely low-budget films look like a million bucks (in early ’70s money). Both movies look wonderful on Kino Lorber’s two film set (though The Abominable Dr. Phibes is the clear winner image-wise) and each film appears on its own disc with a wealth of audio commentaries; there are two separate commentaries for The Abominable Dr. Phibes, one from director Fuest, and one from author Justin Humphreys. Humphrey and film historian Tim Lucas each contribute separate commentaries for Dr. Phibes Rises Again. The set is capped off by original theatrical trailers for both films.