The stylistics of documentary filmmaking helped wipe out the old Hollywood way of doing things, and this sharp look at Olympic skiing is a prime example. Michael Ritchie became a director to be watched filming a killer competitor (Robert Redford), a blaze on the ski slopes and an SOB in every other aspect of his life. The style still looks fresh, 36 years later. 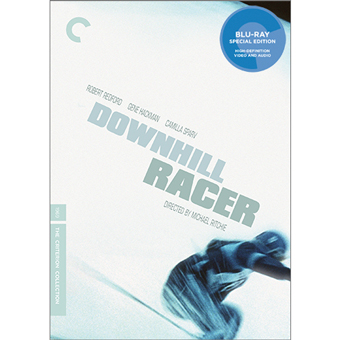 In the late 1960s, when the standard Hollywood way of making movies began to fall apart, some progressive directors took a giant leap by applying documentary strategies to narrative storytelling. Sports didn’t fare well in Golden-Age studio movies, where hero-worship came first and authenticity second. The reality of personalities like coach Knute Rockne and Native American sports star Jim Thorpe has been forever distorted by their filmic surrogates Pat O’Brien and Burt Lancaster. The sports content of these movies is more often than not transformed into superhuman feats and stylized montages.

This background makes Michael Ritchie’s semi-documentary drama Downhill Racer all the more significant. The 1969 film about competition skiing began as a “deal” picture concocted by Paramount to attract hot director Roman Polanski, an avid skier. When Polanski chose instead to do Rosemary’s Baby the project’s enthusiastic star Robert Redford put together the production on his own. The directing nod was given to Michael Ritchie, a TV talent untested on the big screen. Filming in distant Austria proved to be a major plus that allowed the show to operate independent of studio oversight. 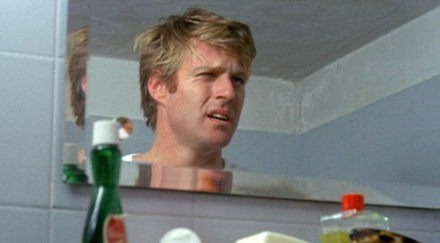 Using a camera style more suited to documentaries, Downhill Racer fashions an intelligent drama around the American Olympic skiing team, then considered inexperienced outsiders outclassed by the Europeans. James Salter’s lean script establishes the character of David Chappellet (Robert Redford), a highly motivated Colorado mountain boy who gets his break when an injury creates an opening in the team lineup. Chappellet is only interested in winning. He’s a handsome, vain and anti-social loner who considers his own teammates enemy competitors. He has no interest in the problems of his coach Eugene Claire (Gene Hackman, excellent), who must bow and scrape to woo team sponsors. Robert Redford is perfect for the role, and uncharacteristically for a Hollywood star, he’s willing to portray David as an unlikable heel. When Chappellet picks up an old girl friend back in Colorado for some fast sex, he refuses to invest the time or effort to even have a conversation with her.

Salter and Redford use Downhill Racer to tell a truth that movies never admit: despite all the blather about sportsmanship, competition is all about winning and nothing else. Television injects fake dramatic conflicts into sporting events, especially the Olympics. When not promoting national rivalries — going against the core spirit of the Olympics — the coverage exploits insipid inspirational back stories, with athletes overcoming hardship and trauma on their path to glory. Focused sports pros are certainly not all like David Chappellet, but self-involved egoists are often the best performers.

Unlike John Frankenheimer’s Formula One racing epic Grand Prix, Downhill Racer doesn’t use announcers or voiceovers to explain the facts and mechanics of the sport. We learn by observation. We see the skiers shiver as they prepare their equipment at the top of the ski runs. Nobody need tell us that the athletes are cold. The freezing waits must surely leave their muscles in knots.

When the races begin director Ritchie’s docu methods take over completely. The racers fly down the narrow, bumpy runs at up to 80 mph, sometimes racing through snowy fog. The skiing action is excellent. Realizing that they needed to roll thousands of feet of film to get a few useful seconds, the production switched to 16mm for much of the downhill action. When an impressive spill was captured, they’d then contrive to have one of their skier-actors dress in the same color suit and helmet to match continuity. The large numbers printed on the racers’ elastic Bibs don’t really matter. In the ultra-fast skiing scenes, the Bibs are largely unreadable anyway.

Ritchie extends the docu filming style throughout the show, shooting with long lenses and arranging and cutting scenes as if the camera just happened to catch important moments. This European look was a fresh addition to the Hollywood of 1969. The film was one of the first to show TV announcers fumbling in stage waits and false starts, a revelation that amused audiences that wouldn’t think to question the polished surface of ABC’s The Wide World of Sports. Helping out considerably is the fact that Robert Redford is completely convincing as a star skier. After a while we forget that he’s an actor at all, as his dramatic scenes are so underplayed. That doesn’t work in most movies, like the same year’s Number One, in which Charlton Heston playing an NFL quarterback… at age 46.

Most scenes are fragments without full entrances or exits. Dialogue rarely extends beyond an exchange or two. As David spends most of his time being sullen and incommunicative this method works quite well. David becomes particularly irate about his lowly status in the starting order. Starting back in the pack means that he must race down a course already rutted by dozens of skiers that have gone before. Eugene tells him that low Bib Numbers have to be earned. 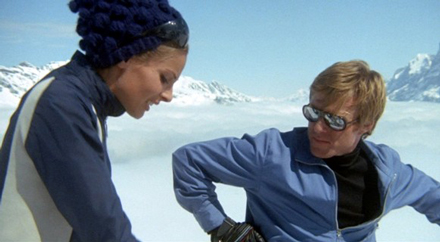 Downhill Racer keeps its dramatics lean, but telling. On David’s trip back home we learn that his father considers him a worthless ski bum. He dismisses David’s ambitions with four withering words about champions: “World’s full of ’em.” The narcissistic David eagerly pursues an affair with Swiss beauty Carole Stahr (Camilla Sparv), who works for a ski equipment manufacturer hungry for product endorsements. David gives Carole his best silent charm treatment; she seems another easy conquest. Only too late does he discover that a European woman might be an even more experienced User than he.

The unspoken lesson behind all of this is that talent trumps all notions of sportsmanship and even civility. As a promising contender, David Chappellet is indulged at every turn. David’s mind is wired only for self-interest. He’s “centered” and “focused,” positive terms for conceit and insensitivity. He has no reaction to the fates of teammates that suffer career-ending injuries. The film challenges our automatic approval of winners.

Downhill Racer’s brilliant ending opts neither for easy cynicism nor an audience-pleasing comeuppance. Even as he accepts his big prize David realizes that more talented and ruthless competitors will be coming down the runs every year. Like a western gunfighter, he’ll eventually be overtaken by the winner-take-all code. For the Lone Wolf competitor, forced retirement is only a bad season or a single accident away.

The Criterion Collection’s Blu-ray of Downhill Racer gives Ritchie’s film the gloss I remember from initial screenings, where audiences sat spellbound at every twitch and dimple on Robert Redford’s wind-blasted face. The digital cleanup is careful not to disturb original flaws in some of the 16mm material, including a brief flurry of yellow emulsion spotting during some of the best action. Actually, the HD transfer makes this the first time I’ve seen the film, that the 16mm-sourced footage is really detectable. Kenyon Hopkins, a composer noted for his work with Elia Kazan and Robert Rosson, provides an effective and unobtrusive score.

The disc repeats Criterion’s excellent extras from 2009. Robert Redford and screenwriter James Salter appear in a new interview explaining the studio politics that both aided and obstructed the film’s production. Considering what the studios sell now, it’s incomprehensible to think that Downhill Racer wasn’t given a decent publicity push by Paramount. I saw it in theaters twice, and it had audiences riveted to their seats – they bought the semi-docu treatment 100%. Another set of interviews gathers the production manager, the film editor and a pro skier / ski double to provide technical details of the shoot. Director Ritchie would work again with Redford on The Candidate; he passed away in 2001. Ritchie appears in an audio interview from 1977 when he was at the peak of his career.

In addition to an original trailer the disc offers How Fast?, a promotional featurette narrated by Robert Redford that plays more like a quality short subject. The folding insert carries an exceptionally good essay by critic Todd McCarthy, which Criterion has also put online: Trailblazer: Downhill Racer.