“It’s under the Big ‘W’!”  A smart cop show goes all ‘Dragnet’ on a trio of criminal cases in the good old City of the Angels. To figure out who gunned down a top detective, rough tough FBI agent Broderick Crawford must get to the bottom of three separate dramas, each involving a beautiful woman. The producers know how to get attention for their show — the climactic shootout takes place under the Hollywood Sign. 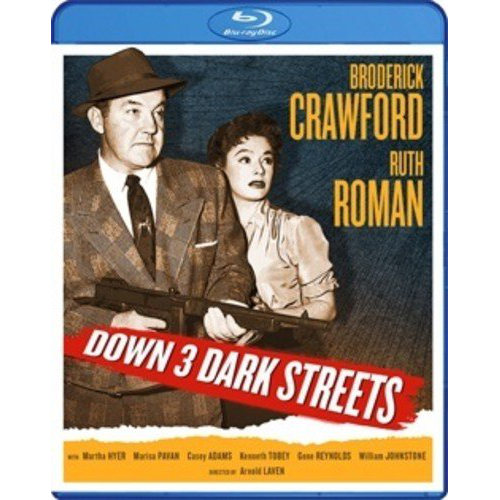 Nobody seems to list this as a film noir, which I’d say is correct; it’s just that the category has been stretched so thin, any old old B&W picture not starring Mickey Mouse is being touted as a noir classic. This particular show has scenes at night (aha!) and deals with federal agents, desperate criminals and terrorized women. Not every crime thriller needs moral complexity, a philosophical malaise or a sense of fated futility.

Down 3 Dark Streets is a straight cop drama, a commercial concoction with a smart multi-story format. The Levy-Gardner-Laven producing team had already put together two acceptable program crime thrillers for United Artists, perhaps with partial backing from producer Edward Small. This was their last UA crime picture before making a change of pace to horror and science fiction. Director Arnold Laven shows an increasing confidence behind the camera, achieving more with modest production resources; the shows he signed at this time play better than most of his later theatrical work. Backed by a regulation ‘police story’ narration read by William Woodson, D3DS assembles more than sufficient commercial ingredients. 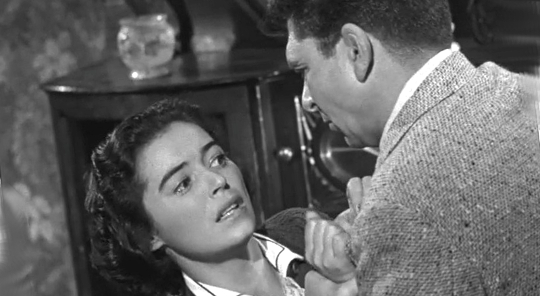 L.A. based FBI Agent John ‘Rip’ Ripley (Broderick Crawford) puts all of his resources into finding the killer of his best friend Agent Zack Stewart (Kenneth Tobey). Since Zack was working several unsolved cases, Rip digs into them all at the same time. Zack was on the trail of fugitive car thief Joe Walpo (Joe Bassett), who has already killed one man while entering California; Rip tracks down Walpo’s good-time girlfriend Connie Anderson (Martha Hyer), but she claims to have no idea where Walpo is. Zack had also just come to the aid of fashion designer Kate Martel (Ruth Roman), who is being terrorized by an extortionist threatening to hurt her daughter. In connection with the car-thief scheme, Zack had recently interviewed the blind Julie Angelino (Marisa Pavan), whose husband is under arrest for stealing a car. And the night Zack was killed, he was trying to contact a very frightened Brenda Ralles (Suzanne Alexander). More thugs show up and another murder is committed. Rip and his agents use various tricks to get results, but have difficulty tying the cases together. Suspecting that Kate’s extortionist is likely somebody she knows, the Bureau narrows its gaze at her personal contacts, especially her greedy Uncle Max (Jay Adler) and her new boyfriend Dave Millson (Max Showalter), a real estate salesman. To Rip’s surprise, Julie uses her sensitivity as a blind person to help put the Feds on the right track.

A straight ‘Dragnet’- era police drama, Down 3 Dark Streets will interest vintage crime fans from several angles. Broderick Crawford underplays his part well. Agent Rip is no meaty role like Willie Stark, yet Crawford gives the part interesting touches of behavior. Rip appreciates the blind woman’s intelligence and remains patient and polite through the provocations of Martha Hyer’s kept woman. In terms of commercial appeal D3DS is the Levy-Gardner-Laven team’s most commercial film to date, with a busy script and a full roster of interesting characters. The multiple-case crime-busting action insures that we pay attention to keep the names and places straight. The police procedures are basic but cleverly unfolded as Rip and his experts in the Bureau trick suspects into revealing their sneaky dealings. Wiretaps for everybody! 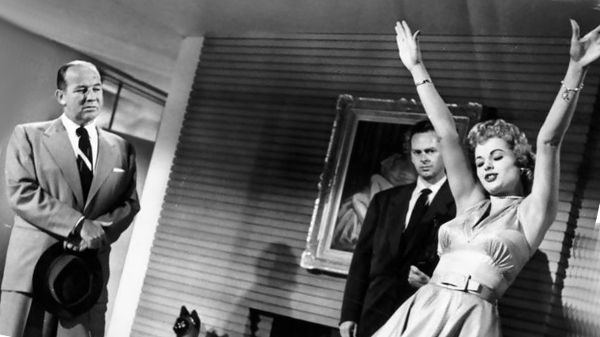 As with most of these second-level thrillers released through United Artists, all of the actors are familiar screen notables, even if none were currently hot names. Definitely past his peak, Broderick Crawford is a year away from his TV show Highway Patrol. Although stuck with names like Rip and Zack, the agents are portrayed as master crime solvers, and a credit to the Bureau. Crawford’s Rip Ripley is also more than gentlemanly with the ladies.

The three stories are interwoven in a way that doesn’t suggest that Down 3 Dark Streets began as separate episodes of a proposed TV show. But none of the three leading actress share scenes together. Marisa Pavan hadn’t yet starred in The Rose Tattoo and The Man in the Gray Flannel Suit, but was staying busy after parlaying her twin-sisterhood to Pier Angeli to score a role in John Ford’s What Price Glory? Scenes where detectives interview blind people are a staple of crime pix (think On Dangerous Ground) but Pavan’s contribution is delicate and believable — she gives Rip a full description of the criminal goon Marty Pavelich (Claude Akins) just by running her hands over his face. 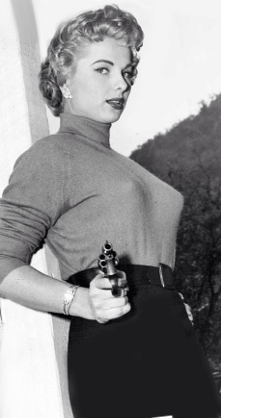 Top-billed actress Ruth Roman had worked steadily in leading roles but never quite achieved top-name status. She projects sex appeal in isolated parts, as in The Window. But more often than not Roman came off as remote or cold, especially in Hitchcock’s Strangers on a Train. Here her Kate Martell is in scared mode from scene one. With her daughter’s life being threatened, Roman makes the part work… within limits. The writing doesn’t address what mothers in the audience would be thinking: the daughter is never given special protection, nor does agent Ripley suggest that she be taken away to a safe place.

Gorgeous Martha Hyer (left) had been seen in modest roles for eight years without getting a break. Typical is Joseph Losey’s The Lawless (1950) in which her only function is to sit on a desk and ask when her newspaperman date will be free. The actress’s career would perk up in her very next movie, as William Holden’s fianceé in Billy Wilder’s Sabrina. Here Ms. Hyer glams up to play a wanted killer’s spoiled ‘n’ sassy trophy babe. Continually fishing for compliments, Connie lays the attitude on thick: “Do you mind if I put something on? I don’t like men staring at me before lunch.” Noir fans seeking out salacious dialogue will love the moment when Connie explains that she digs Joe Walpo because he’s so reliable . . . like a self-winding watch.

Decorating the movie with several attractive women in jeopardy is a viable commercial move. As if acknowledging the exploitative pulp aspect of the genre, the L-G-L team also manage to have two of the ladies partially disrobe. Martha Hyer’s Connie is just showing off, and we’re so inclined we can conclude that she’s a reckless nymphomaniac. But when Ruth Roman’s Kate uncovers her slip, the icky Uncle Max is peeping, adding a suggestion of other sordid possibilities. It gets by because Max is an obvious suspect — he knows Kate is sitting on insurance money from her late husband. The screenplay makes sure that any of Kate’s acquaintances could be the one threatening her with anonymous phone calls. 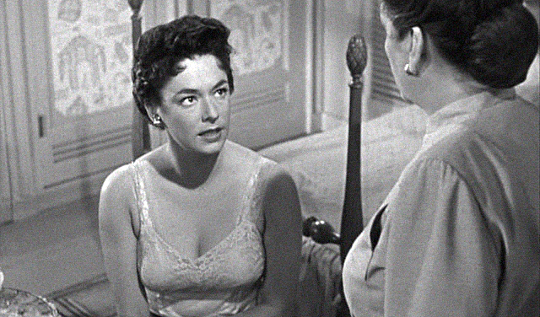 Getting short shrift below the three top-billed actresses is the cute, dark-eyed Suzanne Alexander, who is given only a couple of on-camera moments to shine. Three out of four women are defenseless victims, but all are brave and resourceful. They do have reason for concern, with all the treacherous males out there in the wilds of Los Angeles; the moment Kate walks alone in the dark, somebody tries to pick her up. A particularly tabloid-like crime puts one female victim in an unpleasant situation we remember from Ivan Passer’s much-later crime thriller Cutter’s Way.

The reliable Ken Tobey exits too soon to make a maximum impact, but the ubiquitous William Schallert makes the most of his presence in the opening scene. Max Showalter, sometimes known as Casey Adams, has a key role as Kate’s demanding boyfriend. Showalter had a major part opposite Marilyn Monroe in the previous year’s Niagara. For fans of the unusual his claim to immortality will always be his grotesque comic reactions to Tuesday Weld’s orgasmic glee over her new cashmere sweaters, in George Axelrod’s Lord Love a Duck. Gene Reynolds is a worried car thief and Claude Akins is suitably brutal as the hood that mauls poor Marisa Pavan. Joe Basset is equally repulsive as Hyer’s criminal loverboy. The great Jay Adler exudes slime as the chiseling uncle that Kate would rather not have around the house. Happily, the identity of one of the villains is well hidden until the climax. FBI super-science unmasks him first, of course.

Lovers of vintage Los Angeles will be charmed by the connective scenes filmed out on the streets, circa 1954. We recognize a building or two but few specific locales jump out at us until the finale arrives, and Ruth Roman must make a rendezvous under the iconic Hollywood Sign. The twisting hill roads don’t look any safer back in the mid-fifties, when far fewer homes had been built. As the action gets right up under the sign, actress Roman had some scratchy, rough hours working in the dust and the heat — and in heels, no less. At this point film fans cross their hearts and whisper, ‘remember Peg Entwhistle.’

The film has a second tangential film connection, to a later epic comedy: Ruth is told to deposit her extortion payment under the hillside sign, specifically under the letter “W” in HollyWood. Did Stanley Kramer and his writers the Roses have Down 3 Dark Streets in mind when writing their story? Did Jimmy Durante see this picture and laugh at the way he could say, ‘dah Big Dubbayah?’ Only Michael Schlesinger knows for sure. 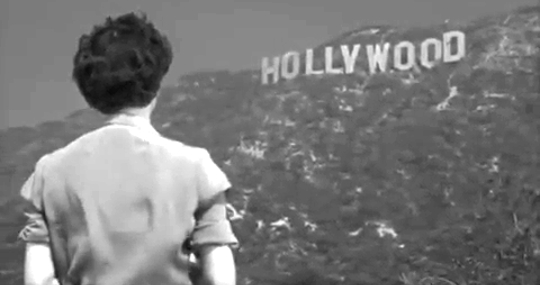 ClassicFlix’s Blu-ray of Down 3 Dark Streets is a smart B&W encoding of this modest but effective picture. The widescreen frame reproduces the correct B&W 1950s police procedural look of cameraman Joe Biroc’s cinematography, but Biroc also takes extra care to present the leading ladies at their best.

The disc carries good English subtitles but no extras. D3DS is not a frequently shown film and doesn’t appear in my noir directories. It’s a solid production from a favorite minor ‘fifties film company.