Blinded by science! And no, it’s not a sequel to Donovan’s Reef.  Lew Ayres yanks the living brain out of a dying millionaire, plugs it into his mad lab gizmo, and is soon obeying the know-it-all noggin’s telepathic commands to scheme and murder. Gene Evans and Nancy Reagan assist in Curt Siodmak’s creative, compelling tale of possession by mental remote control. 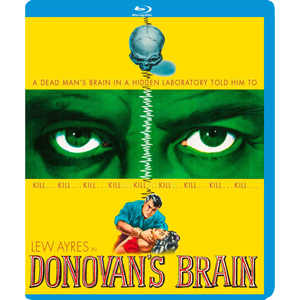 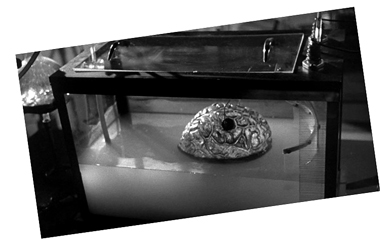 Sci-fi and horror rub elbows in 1953’s Donovan’s Brain, a classy thriller that, thanks to the popularity of Curt Siodmak’s source novel, rests on a higher shelf than most ‘fifties films sourced in pulp fantasy fiction. Although this is executive producer Allan Dowling’s only real foray into feature film production, it’s a quality effort in all respects. The well-known story attracted good actors, in particular the great Lew Ayres, who knew a showcase role when he saw one. Although the storytelling is more than adequate for 1953 standards, better than many independent productions, all that’s lacking is a little more inspiration in the direction.

Writer Curt Siodmak developed good story ideas for various fantasies, many of them concepts he developed for Universal’s second burst of horror filmaking early in the 1940s. As carefully explained in Richard Harland Smith’s commentary, Siodmak worked in the shadow of a far more successful and possibly dismissive older brother, the celebrated director Robert Siodmak (The Killers, Criss Cross, Cry of the City).  Curt had major difficulties when he tried to direct. Editor Herbert L. Strock seems to have migrated into directing by taking the reins when Siodmak couldn’t perform in the director’s chair. 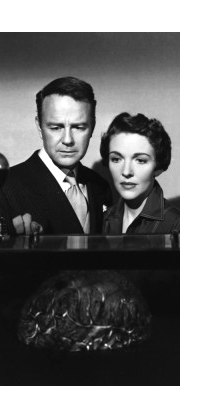 But there’s nothing wrong with his story, which is adapted more faithfully than many. In a lab setup in his desert house, Dr. Patrick J. Cory and his assistant Dr. Frank Schratt (Lew Ayres & Gene Evans) perform unorthodox experiments, keeping a monkey’s brain alive after death. Their opportunity comes when a nearby plane crash brings the domineering financier W. H. Donovan to their door. As expected, Donovan dies, and the doctors remove his brain and keep it alive. Pat’s wife Janice (Nancy Davis (Reagan)) helps with the experiments, and as Frank’s friend helps him with his alcoholism problem. The brain in the tank takes psychic possession of Pat, who begins using his left hand and even walking with Donovan’s limp. He’s soon doing Donovan’s bidding, directing the millionaire’s crooked cohorts in Washington and taking steps to make sure that the life support apparatus for the brain can’t accidentally be shut down. Pat/Donovan must also deal with Herbie Yocum (Steve Brodie), a blackmailing journalist who threatens to publish pictures of the brain. Only at certain times is Pat himself; during one of these lucid moments he leaves Janice instructions on how to neutralize the brain if things get out of control. But Donovan’s brain has big plans to use Pat to extend his financial control over the whole world.

Donovan’s Brain goes against the grain of ‘fifties fantasy — instead of rampaging monsters its biological Jekyll & Hyde story is based on the remote control of a human being. Cinematographer Joseph Biroc pours expressionistic lighting on that tank with the plastic brain, but otherwise the possession theme is expressed only through Let Ayres’ great performance. The fact that Ayres was known as such a gentle leading man makes a difference here. His thoughtful, sensitive doctor in Johnny Belinda goes entirely against the grain of two-fisted Hollywood heroes, making it genuinely disturbing to see him playing an even mildly unethical character. As directed by Felix Feist, the dramatics are far more organic than in typical mad doctor movies. Dr. Cory has a wife, and to some degree she’s a complicit enabler. Cory’s colleague has personal problems. And Cory is trusting enough to be trapped in a way that the diabolical Donovan never would, in Herbie Yocum’s blackmail scheme. 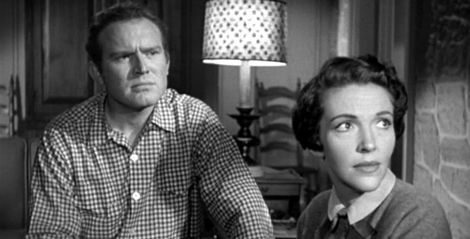 The form of Donovan’s schemes is also rather adult. Instead of embarking on a series of revenge murders, as did Boris Karloff’s mad doctors of a decade before, Donovan’s aim is to pursue a plan of economic tyranny. Like a latter-day Mabuse, Donovan was a capitalist menace to society before he became a floating brain. Now he must dispatch Cory to do his bidding.  The doctor delivers the threat that any of Donovan’s old contacts that get out of line will suffer a fatal accident. The only thing that gives Cory, Janice and Frank a chance is the fact that the brain needs to rest every so often, and while it rests they can plot counter-moves.

Like I said, the brain in the tank might have been impressive in 1953. It grows and glows and changes in appearance; sometimes it looks like it’s been spray-painted silver, or like a scaly armadillo rolled into a ball. What could they do?  Any attempt to make the prop look like a real brain would have been censored as obscenely graphic — even the poster art shies away from depicting a naked brain, settling for a nude skull instead. The brain reminds us how good the acting is. With solid support from Nancy Davis and Gene Evans, Lew Ayres keeps things tense and moving.

What’s lacking is a little more oomph from director Felix Feist. We wouldn’t expect a modest independent American production to invent cinematic devices or to go in for artsy stylistic effects, but Feist and editor Strock don’t even accelerate the pace as the climactic confrontation arrives.  On a clear, bright day, a few flashes of light and claps of thunder can’t add much atmosphere. Focus on the performance of Lew Ayres, and Donovan’s Brain comes up a modest winner.

The KL Studio Classics Blu-ray of Donovan’s Brain is a clean B&W encoding of this Academy-ratio production that begins and ends with title cards bearing the initials of the executive producer. The film elements have always been in good shape, and the transfer presents them at their best.

Several trailers are included along with Joe Dante’s Trailers from Hell segment on the show. The winning extra is Richard Harland Smith’s commentary. After doing such good work on the unrewarding Phantom from 10,000 Leagues R.A.H. finally has a worthy title to dissect. There’s the usual lengthy filmographies of every player we see on screen — some of these are big surprises, like finding out that ‘Kyle James’ is really James Anderson from Five and To Kill A Mockingbird. Even stranger is the connection between cast member Lisa K. Howard and conspiracy theories around the assassination of J.F.K.. She became an important news figure and her interviews with Fidel Castro, Che Guevara and Nikita Kruschev made her an important participant in the President’s negotiations.

Smith also gives us a rundown on every movie one can think of with a brain, a disembodied brain, a brain guilty of remote-control possession, other movies about remote control possession, and ad infinitum. I think that listeners less sci-fi obsessed might appreciate these connections more than I do. But Richard really excels on the production detail, charting the way various principal creatives got into Donovan’s Brain, and the events that led up to Feix Feist taking over for presumed director Siodmak. It’s interesting that Feist got a break early on, directing RKO’s (almost lost) post-apocalyptic science fiction epic Deluge and then being busted down to short subjects for ten years, before crawling back up again on modest films noir.  Commentator Smith connects the dots between his research and his opinions, being carefult to separate known facts from good guesswork. He’s done everything short of spending a week asking the last surviving participant Nancy Reagan questions about the film. Somehow I don’t think that would be a high priority for her.