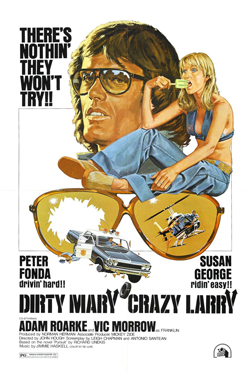 A kind of Bonnie and Clyde for the Nascar crowd, director John Hough (The Legend of Hell House) puts together an eccentric and original premise with an equally quirky cast including Vic Morrow, Kenneth Tobey and Roddy McDowall in support of stars Peter Fonda and Susan George, two misfits on the lam from the law after a supermarket robbery. Released mainly to drive-ins, Hough’s carefree crime chase brought in a more than respectable 14 million at the box office.