G.W. Pabst’s silent German classic is intact, restored and looking great. Louise Brooks is the virginal innocent betrayed on every level of the sexual double standard. Brooks is nothing less than amazing, with a performance that doesn’t date, and Pabst only has to show how things are to make a statement about societal hypocrisy. German cinema doesn’t get better. 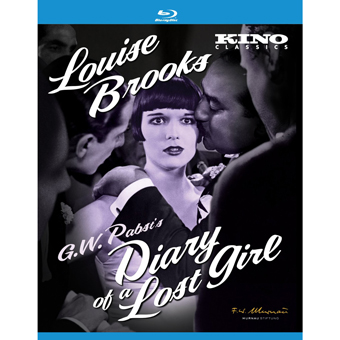 The universally revered Louise Brooks – G.W. Pabst classic is 1929’s Pandora’s Box, a fully developed leap into silent film expressionism and exotic eroticism, made in the depths of Weimar Germany. PBS stations played a blurry but mesmerizing copy around 1978, at which time I scraped up a used published film script, the one with the silver cover and essay by Louise Brooks. Much earlier, I remember attending a screening of Brooks and Pabst’s other notorious feature from 1929, Diary of a Lost Girl (Tagebuch einer Verlorenen). It was in basically good 35mm, but was a continuity-challenged mess missing perhaps a third of its footage. Action within scenes didn’t make sense and the overall story was a mystery as well. We were told that it was had been cut for reasons of censorship. Since one fairly intact section we did see showed Valeska Gert apparently having an orgasm while beating out time for a group of delinquenten mädchen, all we could do is speculate that the movie must have been much, much hotter. 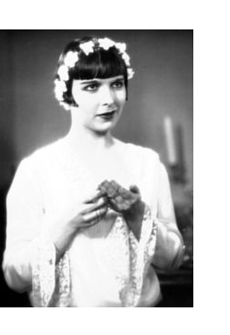 The word Verlorenen in German is defined as not just lost, but also defeated; gone; hopeless, forlorn; kaput, ruined. But Diary of a Lost Girl has since been substantially restored. The present version is said to be only about 102 meters short of the original length. Kino’s Blu-ray of the Friedrich Wilhem Murnau Stiftung’s reconstruction is a sensational find. In the last ten years or so we’ve seen marvelous Kino discs of restored German silents by Murnau and Lang. As this picture brings us more Louise Brooks, alive and kicking, it’s a major source of pleasure.

Diary is an open critique, a social protest film about women’s rights. The men are either predators or weak, or both; and the woman’s place in society is so insecure that we understand when they commit injustices. There’s no other way to survive. Virginal Thymian Henning (Louise Brooks) takes her First Communion only to be all but swallowed up by male desire. Her womanizing father Robert (Josef Rovenský) owns a pharmacy. He dismisses his maid Elizabeth (Sybille Schmitz) for the ‘crime’ of becoming pregnant, even though he was obviously her seducer. Robert’s pharmacist Meinert (Fritz Rasp) keeps a collection of pornographic photos, and wastes no time seducing the unsuspecting Thymian after hours. Robert takes a new maid, Meta (Franziska Kinz), a woman with enough bad experience to leave nothing to chance. She quickly wraps her employer around her fingers, with marriage as the goal. When Thymian turns up pregnant, Meta is one of the first to condemn her. Thymian refuses to marry an admirer, the spendthrift rich boy Count Nicolas Osdorff (André Roanne). Her unforgivable ‘ingratitude’ is severely punished. The baby is put up for adoption and Thymian is sent to a reformatory. Billed as a philanthropic 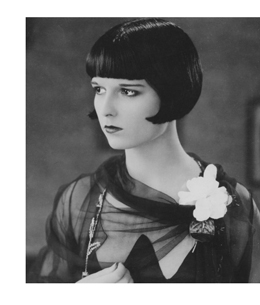 enterprise, the combination sweat shop and torture chamber is run by a cruel director and his sadistic, sexually disturbed wife (Andrews Engelmann & Valeska Gert). With the help of Count Nicolas, Thymian escapes along with Erika (Edith Meinhard), a tough girl who invites Thymian to work in a brothel. Having been disinherited, the Count goes along with Erika. Thymian has no idea what goes on in a brothel. She first goes back to try and reclaim her baby.

Diary of a Lost Girl plays beautifully. We expect almost all dramas from this time to work within a restrictive framework of ‘contemporary morality,’ but Pabst avoids all that in search of a higher truth. The movie is political, not because it pushes a message but because it has a theory of how human relationships work. Robert Henning and the despicable Meinert use sex for their pleasure; their women are possessions. Meinert also uses Thymian as a pawn in his plan to wrest ownership of the pharmacy from his employer. When Thymian appeals to him for decency, he doesn’t even face her. He has her father over a barrel financially. The weakling Count Nicolas is pretty much a useless drone. We assume that he becomes a tout for the brothel, working to bring in customers… but might he also be a gigolo or even a male prostitute?

The other male characters form an unforgettable gallery. The grim, menacing director of the reformatory, Andrews Engelmann, is a dead ringer for Richard Moll of TV’s Night Court from the 1980s. Kurt Gerron is a doctor who frequents the brothel, while the comic Sig Arno is a goofy customer. In one of the film’s few intentionally funny scenes, Arno doesn’t realize that the untutored Thymian thinks he’s come for dance lessons. Seeing Arno is a strange thing — just thirteen years later 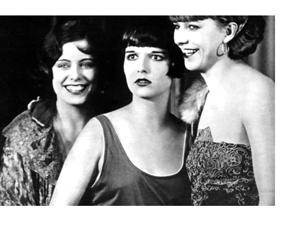 But the women tell a different story, one of subjugation by sex and by class. The helpless Elisabeth is another impressive appearance by Sybille Schmitz, of Dreyer’s Vampyr. Robert Henning knows that Elisabeth is doomed without her job, yet he throws her away as if she were trash. The cagier Meta ropes Robert for a husband as a way into the middle class, whereupon she acts with even less tolerance than her new peers. Given the keys as the new lady of the house, Meta immediately scrapes Thymian’s name from one of them — a stepdaughter might threaten her newfound security. All of the women are trapped in cages of one sort or another. Valeska Gert’s flipped-out reformatory warden has become a sadistic disciplinarian, sexually obsessed with her charges. Young Erika has youthful vitality of spirit, yet also a knowing, streetwise way of sizing up people. The other girls in the brothel treat Thymian gently but don’t interfere in her ‘education.’ 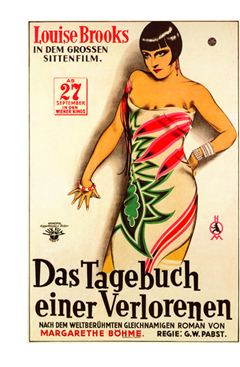 The elegant screenplay eventually liberates Thymian from the Lower Depths, with her consciousness now attuned to recognize the hypocrisy and intolerance running through society. The story loops back to the reformatory, where Thymian takes a personal stance — not a political stand — for a morality that includes something resembling human kindness. Unlike the utter doom of Pandora’s Box, Pabst’s Diary of a Lost Girl ends on a well earned sentimental note.

“A little more love and no one would be lost in this world.”

Back in film school David Bradley showed us a terrific print of Pabst’s The Love of Jeanne Ney. The 1927 movie wowed us with its fluid movements and dynamic editing, using tricks we thought were invented in the 1960s. That’s why parts of Pandora’s Box seemed rather klunky, with odd angles that didn’t cut well, including examples of crossing the 180-degree line that did indeed look like serious mistakes. Made the same year, Diary of a Lost Girl is somewhat more fluid than Pandora, although of course not as spectacular. The editing pattern in the reformatory falls into a cadence as the girls eat their soup to a rhythm beaten out by Valeska Gert. It plays almost like the rowing scene in Ben-Hur, except that Gert is clearly deriving a sexual glow from the ritual. When Thymian tries to confront her father in a nightclub — the bourgeois can go ‘have fun’ in the depths — we have more bizarre 180-degree issues. Thymian and another character face each other to talk, but the mismatched eye-lines make us think that they’re both looking at an unseen third party. Pabst is very particular about the visual aspect of his films, so his occasional scrambling of screen direction is an interesting detail. 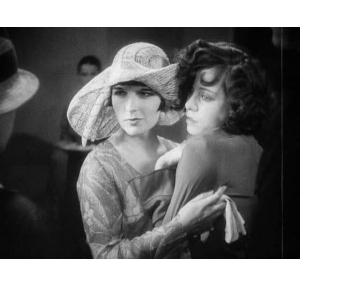 Some of Brooks’ costumes are certainly striking, even if they aren’t as extravagant as her wardrobe from the previous picture. The slinky gowns in the brothel make a strong contrast with her communion dress in the first scenes. The show’s sets are also impressive. As noted in the commentary, many of the most dramatic encounters occur on stairs.

Louise Brooks is amazingly photogenic. Barely 5′ 2″, she nevertheless seems to fill the screen with flesh. All of the characters have arresting presences — Franziska Kunz has a worried look about her that reminds me of actress Jessica Harper. The runaway delinquent Edith Meinhard would fit right into the punk scene of the 1970s. But Louise Brooks completely consumes the screen. She was not received well by the German audience. Variety’s British reviewer slammed her as well: “(Pabst is) …unfortunate in the choice of his heroine. Louise Brooks (American) is monotonous in the tragedy which she has to present.” But Pabst knew exactly what a treasure he had. Brooks’ lack of externalized emoting causes us to watch her more closely. In Pandora she was a mystery, the kind of child-butterfly who might respond to tragedy with an uncomprehending smile. Diary of a Lost Girl hits us with just as many emotional surprises. Thymian is taken aback by everything that happens, yet retains her dignity no matter what the humiliation. Louise Brooks’ performance is not tied to any time period, style or -ism. Her life energy persists outside standard moral boundaries. Her essence cannot be defeated.

The Kino Classics Blu-ray of Diary of a Lost Girl is a marvelous reconstruction and restoration. With their plain title cards and tight continuity, German films of this time can be a little abrupt. But the film is surprisingly easy to follow. The inter-titles are in German, with English subs. We’re told that pieces of the picture came from different sources. All blend well save for one obvious recovered censor scene in which Meinert actually lays Thymian down on a bed. Most of the rest of the picture is in great shape. It was indeed strange, recognizing bits of the show from the long-ago screening, but only now having a clue as to what’s going on.

From Educational Pictures, the short subject Windy Riley Goes Hollywood shows how hopeless Brooks’ prospects for a comeback were, after walking out on Paramount back in 1928. It’s terrible, worse than her nothing role in the later Republic western Overland Raiders with John Wayne. Her European movies are great art but they meant nothing to the studio executives eager to teach Brooks a cruel lesson.

The presentation is given a piano score by Javier Perez de Azpeitia, which plays very well. Thomas Gladysz’s commentary is thorough and informative; it frequently refers to Louise Brooks’ writings. It acknowledges that after her film career dried up, Brooks became a call girl in New York. The commentary tells us everything known about practically everybody who shows up on screen. Actors Kurt Gerron and Sybille Schmitz had tragic futures. People now familiar with the uncut Metropolis will immediately recognize Fritz Rasp, most of whose part in the science fiction film was restored in 2008. Gladysz directs an interesting website called Louise Brooks Society.

Kino once put out a DVD of Louise Brooks’ third European effort, the French film Prix de Beauté. It would be marvelous to see that gem restored as well.