Director Jan Němec made his name during the Czech New Wave of the 1960s, and later saw his career cut short when the ruling party decided to classify one of his films as ‘banned forever.’ This first feature is a striking chase story about two young men escaped from a Nazi prison train. It experiments with filmic space, looking for psychological depth by mixing a subjective pursuit with the main characters’ memories and thought-dreams. The extras give us a close-up look at a director who paid a steep price for defying the state. In 2017 we read that Criterion had made a distribution deal with the Czech Republic’s National Film Archive. Perhaps part of that arrangment now brings us 1964’s Diamonds of the Night (Démanty noci), a picture by Jan Němec that’s clearly influenced by French pictures from earlier in the decade. The story regards the Holocaust in minimalist, first-person terms. In gritty B&W, we follow two young escapees from a Nazi train transport, perhaps still in Germany on their way East. We’re told nothing about the men and they rarely speak; only about halfway through do we see a pair of military officers wearing swastikas. Our field of vision is restricted to the boys’ immediate situation and surroundings.

The show begins with a jolt, in the middle of the action of the escapees scrambling away from the train tracks and climbing a long, tall hill while being shot at by unseen gunmen. The only sounds are the gunshots, the thrashing noises as they run and climb, and their frantic breathing. It’s a trucking shot, and it goes on seemingly forever as they climb in real time. The camera angle makes the hill look less steep than it is, until we see that the trees are tilted to the right!  Only someone young and fit could run like this, and these two are starving to death. 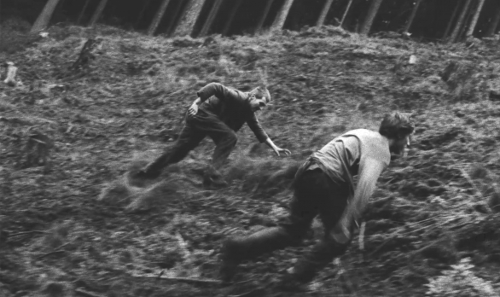 Criterion’s extras tell us that much of the film’s budget was expended on this first shot, to hook the audience’s interest without telling them anything specific about the two boys on the run. Jan Němec constructed a camera ramp hundreds of feet long, extending way up a steep slope in the woods. It was actually two ramps — a second part with a counterweight on a cable made it possible to push the camera uphill. It’s pretty amazing; not even SteadiCam could keep up with the two runners.

Diamonds of the Night has more surprises. It doesn’t strictly tell a story, and its ending is completely ambiguous. It instead shares the mental processes of the escapees. Some of this comes in memory flashbacks. We see them in a train car with other prisoners, presumably being transported to a different prison camp. One trades his shoes for something to eat — it looks like dried melon rinds. These thought-jumps are sometimes given a logical impetus. When one boy rubs his injured foot, the flashback to the train car recurs, focusing on the fact that the shoes aren’t a good fit. These cutbacks show us ‘real’ things that are on the boys’ minds as well. One of them remembers a girl, and we see him talking to her. 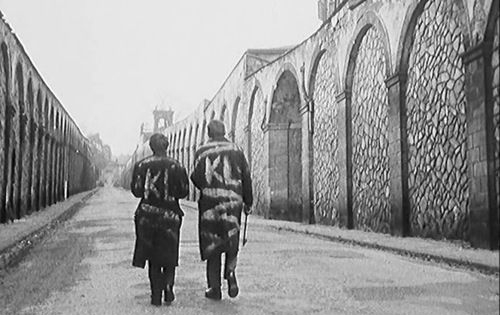 The pattern is first confusing, because Jan Němec also interrupts the weary flight with flashbacks that aren’t actual memories, but half-dreams or free association visions. In these they are wearing rumpled dust jackets painted with the letters “KL,” which stands for Konzentrationlager, or concentration camp. We know these images aren’t real, because we see them happily walking through city streets, even passing a pair of uniformed Nazis that pay them no mind.

One of the boys has a recurring thought-vision of leaping on a tram car and climbing toward the front car. Only later in the movie does one of these dream visions see him reaching the final car, where a handful of strangers, some suspicious, stare at him. One of them is the girl he was talking with earlier. 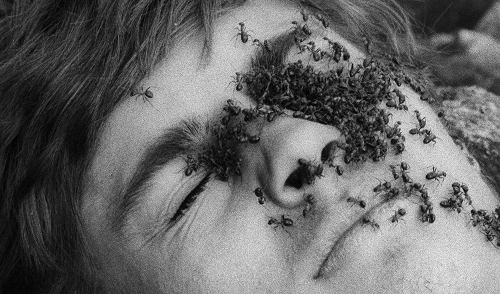 The fractured structure shows that Diamonds of the Night is strongly influenced by New Wave pictures. In structure it resembles Alain Resnais’ Last Year at Marienbad crossed with Borges’ An Occurrence at Owl Creek Bridge: most of the movie is a feverish pursuit, concentrated so subjectively that the boys don’t see their pursuers. The steep, heavily wooded hills seem to go on forever, and they’re literally starving to death — we’re reminded of the endless Manchurian forests in Masaki Kobayshi’s The Human Condition, forests that look beautiful but yield nothing a man can eat. One passage sees the boys climbing a long slope of jagged rocks. When one boy pauses, ants swarm over his feet. A thought-visual sees a horde of ants on his face, and he brushes his face reflexively. It’s a direct expression of the thought, ‘All I have to do is stay in one place a minute, and this forest will eat me alive.’

The only human contact on the way is with a farmer’s wife, who gives them some bread and butter. Their stomachs react badly to the bread, and they spit up blood. As in an experimental film, the boy who asks for the bread visualizes the woman lying on a cot, and then further imagines (we hope) killing her with a piece of wood. 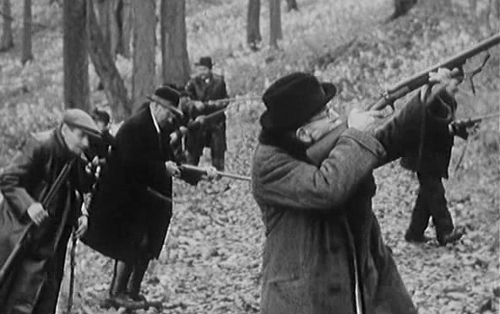 In their extreme state these hallucinations likely become confused with reality. Late in the picture Němec introduces parallel action in the form of a local German home guard, all old men in terrible shape, who form up to hunt the boys. It’s a motley group with their squirrel guns, but lucky timing permits them to catch the boys, one of whom is too injured to sprint away. Němec’s ending is consistent — we have images of two fates for our fugitives, and it’s almost not relevant which one is ‘real.’

The show isn’t just an extended student film experiment — the Resnais-like interweaving of levels of consciousness adds dimension to the characters, who mostly act by instinct. They’re much too deep into their plight to show outward desperation or emotion — all that’s left is exhaustion and the need to keep moving. Not giving the boys personal stories also prevents us from particularizing them. We care about them as individuals, but their status as generic fugitives from Fascism keeps us thinking about the big picture, not just two special cases. Their dazed desperation was shared with millions of the doomed — people reduced to terrorized, hunted rabbits. 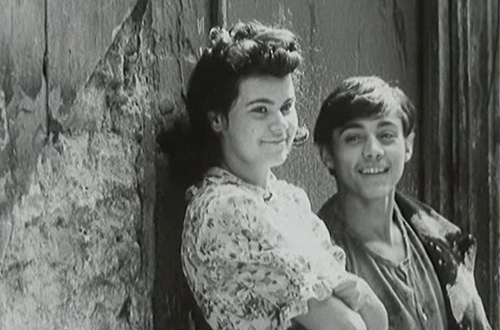 The Criterion Collection’s Blu-ray of Diamonds of the Night is an impressive 4K digital restoration that pops from the screen — subtle changes in film texture are immediately apparent. The B&W cinematography is rich, not grainy or heavily contrasted.

Most American film fans know about the Czech New Wave of the 1960s through a few expatriates that continued their careers in the West — Ján Kadár, Miloš Forman, Miroslav Ondřiček. All I knew of Jan Němec is that he was banned from filmmaking by the politicians. Thanks to the Eclipse series of DVDs, I’ve also seen his stunning film A Report on the Party and the Guests, a Kafka-like nightmare of social life within a communist state, where the powerful use niceties to spread repressive fear. Disc producer Elizabeth Pauker gives us a fascinating 2009 interview with Němec, where he tells his whole story in a fairly good humor. He’s not a fiery rebel, just an artist who wanted to express himself, and he had both good and bad experiences in the Czech film industry before the Soviet incursion put a stop to anything not state-sanctioned.

We also see Němec’s short student film A Loaf of Bread, which is related in subject matter to Diamonds of the Night. Criterion could have stopped there, but the extras continue. A documentary from 1993 allows Jan Němec to tell the story of his mentor Arnošt Lustig. And the film is discussed from two perspectives, by film programmer Irena Kovarova and scholar James Quandt. The insert folder essay by Michael Atkinson explains aspects of the picture not immediately apparent, like the meaning of the ‘KL’ painted on those prisoner coats.