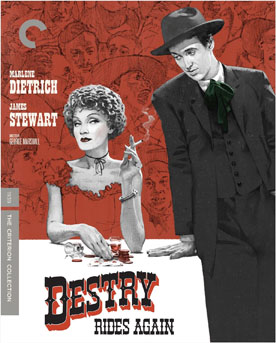 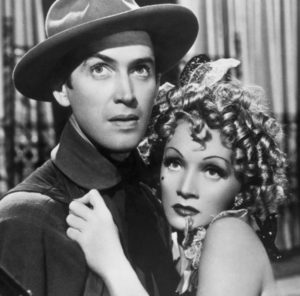 America’s favorite boy next door meets the Weimar Republic’s preeminent vamp in George Marshall’s Destry Rides Again. James Stewart plays Tom Destry, the self-effacing straight-shooter who cleans up a lawless backwater burg without firing a shot – almost. Marlene Dietrich is Frenchy, a world-weary chanteuse who rules the roost at the town’s only waterhole, the Last Chance saloon. Their relationship is more heated than the volatile town itself but after the final punch is thrown their bond is deeper than any typical Hollywood romance.

Marshall’s comic horse opera was released by Universal in 1939 and like so many of that studio’s horror films of the era, it opens with a slow pan over a moonlit graveyard with more than its fair share of tombstones. Instead of a wolf howling on the soundtrack the air is filled with the sound of gunfire – which accounts for that overstuffed cemetery. Bottleneck is the name of the hamlet and it’s run not by any lawman but the owner of the Last Chance played by Brian Donlevy, a cutthroat card shark known only as Kent. 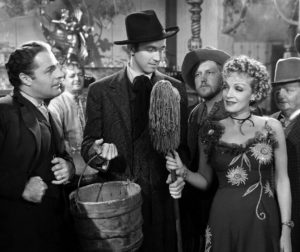 The equally crooked mayor has just replaced the previous sheriff who was murdered while investigating one of Kent’s more nefarious poker games. His successor, “that paragon of courage”, is the town drunk, Washington Dimsdale played by Charles Winninger. The old souse is installed to give Kent free reign over Bottleneck and its surrounding territories but Dimsdale has other plans – he hires the easygoing Destry to work a miracle.

The newcomer’s first day on the job doesn’t offer much hope. More doormat than enforcer, the amiable rube lets himself be pushed around by Kent and in particular Frenchy who enjoys humiliating men as a matter of principle – she even cheats one sucker out his pants. That gullible mark is a comic-relief Russian named Boris Alexandrovich Stavrogin  and he’s played to hilarious effect by Mischa Auer. Una Merkel is his wife Lily Belle and she has a few words for Frenchy about those missing trousers. The barroom melee that transpires is one for the ages (more astonishing than that Donnybrook – Dietrich and Merkel did their own stunts). 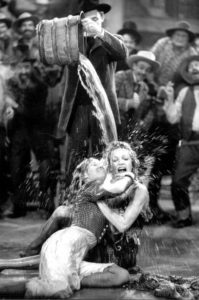 With The Ghost Breakers and Murder, He Says to his credit, George Marshall was one of Paramount’s finest comedy directors (a lustrous roster that included Leo McCarey and Preston Sturges). He brought his keen story sense and comic timing to Destry, giving a unique twist to what could have been a standard issue farce (in 1954 he remade his own film as Destry starring Audie Murphy.) With the help of Felix Jackson and a frantic corps of screenwriters (much of the dialog was written the day of shooting), the movie becomes a slapstick treatise on sexual politics with the man from Indiana, Pennsylvania and the Berlin-born Dietrich as the primary combatants.

Frenchy sounds the charge by humiliating Destry in their very first encounter, handing him a mop and bucket with a terse “get to work.” Moments later he uses that scuttle to repay the favor. Speak softly and carry a big pail of water; in this carnal cat and mouse game Destry is the more subtle – and witty – role-player. And no matter how spineless he may appear, he always has the upper hand. When the dust has settled on their initial animosity he rejects her amorous advances by smearing her makeup – the streaked lipstick trails down her chin like blood. They’re both gradually melting, though – Destry’s decency begins to sway the siren and her wounded disposition stirs something more than just sympathy in the shy cowpoke. A spark is lit and it pays off in the melancholy finale with their one and only kiss. 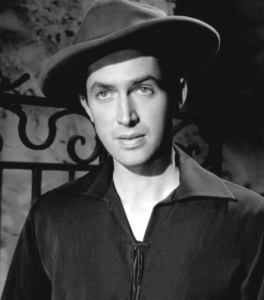 Stewart is supremely nonchalant, never overplaying the aw shucks routine that marred some of his later performances and Dietrich elevates her legend to new heights with indomitable enthusiasm and heartbreaking vulnerability – a deliberate break from her ice goddess persona. Donlevy is in fine villain mode and Samuel H. Hinds makes for a particularly loathsome figure as the tobacco chewing mayor – as Kent’s reliable fixer he’s a frontier version of Bill Barr. 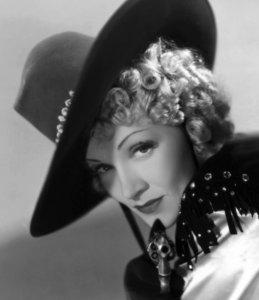 The film was a formidable success at the box-office – perhaps because it plays it both ways. Destry is swept off his feet by the tempestuous Frenchy yet settles on a blandly pretty apple-cheeked blonde. And as Imogen Sara Smith points out in the new Blu ray release from Criterion, the film has “if not a pacifist message, at least a very satirical and skeptical version of American love of guns and violence.” Yet in the end it gives the audience what they were waiting for – the primal thrill of watching a revenge-minded Destry strap on his firearms.

Along with Smith’s insights Criterion’s release contains an exquisite transfer of cinematographer Hal Mohr’s work (he did the unearthly lighting for A Midsummer Night’s Dream). Also included is an interview with Stewart’s biographer Donald Dewey who’s blessedly clear-eyed about the beloved actor. Farran Smith Nehme contributes yet another perceptive essay – particularly illuminating is her take on Destry‘s long-running influence on other films including an eye-opening insight into  Blazing Saddles, calling Mel Brooks’s film “… a near remake released thirty-five years later, with Madeline Kahn doing a paralyzingly funny send-up of Dietrich as Frenchy that somehow dims Marlene’s luster not a bit.”*

The official lineup of extras from Criterion’s site: