The murky crimes of sordid characters come to the fore in the wide-open Nevada spaces… producer Hal Wallis’ Technicolor noir concentrates on the possessive and perverse competition for Lizabeth Scott’s luscious blonde — the mother that wants to corral her, the gangster who thinks she’s an escape and the local hunk who wears a badge. Robert Rossen’s edgy screenplay depicts its violent action on a psychological level. 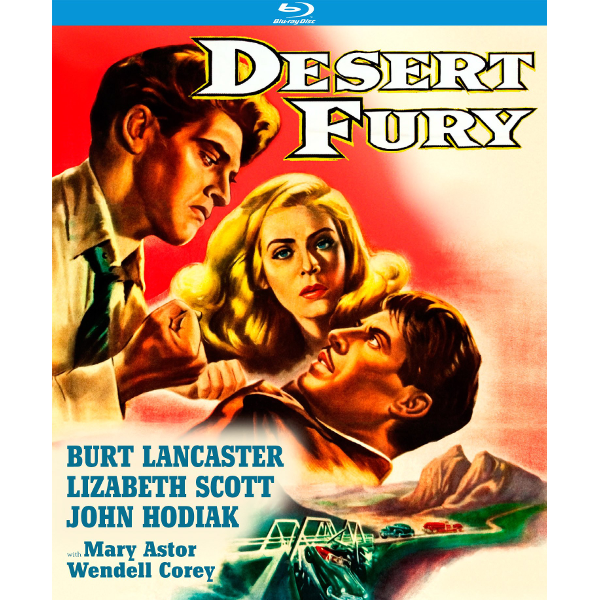 As he was under contract to Hal Wallis, Burt Lancaster’s first pictures were chosen by the producer, not the actor. 1947’s Desert Fury is a Technicolor noir that takes advantage of colorful southwestern landscapes much as did John M. Stahl’s Leave Her to Heaven of a couple years before — the themes are just as dark, but the bright colors blast out like a four-tone art illustration, making everything look hyper-real. Like Gene Tierney in the previous film, Desert Fury makes Lizabeth Scott look too beautiful to be real.

The almost hypnotic reality-unreality of Fury’s surface covers a story not unlike Wallis’ previous hit The Strange Love of Martha Ivers, a grim tale about perverse relationships. Both were written by Robert Rossen, who had become a director as well. Most of the criminality in the melodramatic Desert Fury happens before the story begins. Despite the Technicolor gloss, the story is essentially about a young woman learning about the rottenness of the people around her.

Written with an uncredited assist from A.I. Bezzerides, Desert Fury concerns the unstable dynamic between five unusual people. Like many small Nevada towns, Chuckawalla has a gambling saloon with an unsavory reputation, run by someone with a shady past, and kept alive by civic corruption. Fritzi Haller (Mary Astor) makes plenty of money from the Purple Sage Casino but has no social standing in town. The widow of a bootlegger, she originally came West to town to recover from T.B.. Sheriff’s deputy Tom Hanson (Burt Lancaster) is the only honest cop in town. He’s not pleased to see the return of gambler and racketeer Eddie Bendix (John Hodiak), whose wife died under mysterious circumstances about a year back. Eddie is laying low after some bad business in Los Angeles. He has left his gang behind; his only cohort is Johnny Ryan (Wendell Corey), who waits on Eddie like a servant but also critiques his every move.

Also returning to town, Fritzi’s daughter Paula (Lizabeth Scott) has quit college for reasons unknown, announcing that she wants to help at the Casino. Paula’s every move is to direct and control her daughter. Sparks fly when Paula meets the much older Eddie, causing consternation all around. Angry and frustrated, Fritzi tries to stop the affair — she’s hiding her own relationship with Eddie from years before. Tom Hanson is also not happy about Paula’s choice of boyfriend. Paula won’t listen to the stories about a car accident that took the life of Eddie’s first wife … who Paula is said to closely resemble. Fritzi tries bribery to steer Paula toward Tom, but Tom won’t cooperate. Paula’s visits with Eddie irritate the everpresent Johnny Ryan, who snaps and snipes at the relationship from the sidelines. Johnny wants Eddie to stop the romantic nonsense and get back to running his gang while he still can. Johnny reasons that if Paula knew what Eddie was really like, she’d run for the hills. The web of unhealthy relationships goes even deeper. Although Lizabeth Scott’s Paula looks far too old to be a 19 year-old college dropout, she is convincingly unaware of the depth of the corruption around her, and in her own family. For 1947, the setup is morally unsavory: the slick Eddie once slept with the ‘bad woman’ Fritzi, and now wants to do the same with her daughter. (Note: Nobody, including critics, seem concerned that Paula could be Eddie’s daughter.) Paula doesn’t realize that Eddie is not as gentle as he looks — he’s actually dangerously possessive and violent.

Burt Lancaster’s ‘hero’ Tom Hanson has his own issues of failure and inferiority — once a rodeo champion, he’s now an underpaid lawman with no prospects, and too proud to take Fritzi’s handouts. He’s not perfect, in that he stalks Paula and finds an excuse to beat up Eddie. Burt Lancaster has 3rd billing here, making Desert Fury an all-star ensemble. He was almost always billed first, often above the title, throughout his career.

Mary Astor’s worldliness was no sham. She was an ambivalent presence in Hollywood, a silent movie survivor who sidestepped abusive parents and sex scandals with uncommon grace. A notorious diary she kept of her many amours was at one time the talk of the town, when it was used against her in a custody fight in a divorce. Astor’s standing as a fine lady remained untarnished, but the aura of sexual adventures made her a natural for the lead in The Maltese Falcon. In this picture Fritzi is a woman with plenty to hide, trying desperately to keep her daughter away from her sordid past and unhealthy present. The characters played by John Hodiak and Wendell Corey fascinate fans of gay subtext in noir thrillers… except that their co-dependent relationship now seems far too out in the open to be called subtext. The racketeers have been constant companions since they met. The handsome Eddie is ostensibly the Alpha male boss-man, yet Johnny Ryan’s hold on him is more than a professional-criminal bond. Johnny is on the same side as Fritzi when it comes to Paula. When Eddie seriously takes in the young woman, Johnny goes berserk.

Wallis contractees Lizabeth Scott and Wendell Corey both became 2nd tier stars for maybe ten years each. Scott’s ‘hard’ beauty and gruff voice typed her as women looking for trouble; when behaving more normally as in The Company She Kept and Jacques Tourneur’s Easy Living, nobody paid attention. Being outed as lesbian in the early ‘fifties put a chill on her career, when critics suddenly decided that she was a narrow-range actress, a substitute for Lauren Bacall or Veronica Lake. This is Wendell Corey’s first film, for the star-maker Hal Wallis. Corey would specialize in non-aggressive males, ending up as an oddly passive patsy supporting Barbara Stanwyck in The File on Thelma Jordon and The Furies. Of course, he’s best known for his part in Hitchcock’s  Rear Window.  Corey’s detective is married, yet he too seems to be an outsider looking in at a lustful heterosexual relationship.

Although Wendell Corey’s Johnny Ryan seems obviously gay now, general society in 1947 was in denial that homosexuality existed. For most ‘civilians’ there WAS no radar for gay subtext. The unworldly church types manning the Production Code must have been completely clueless. They didn’t pick up on Johnny’s story of how he met his gangster companion:

“It was in the automat off Times Square at 2 in the morning. I was broke. He had a couple of dollars. We got to talking. He ended up paying for my ham and eggs. I went home with him that night. We were together from then on.”

Although only blind audience members will fail to pick up on the perverse relationships between Fritzi, Eddie and Johnny, it’s not clear that Paula ever fully understands. Apparently Eddie isn’t fully self-aware either. The strong, romantic rogue turns out to be a craven weakling. These subtle/not so subtle subversive undercurrents are what make a melodrama like Desert Fury noir: the foundation of ‘acceptable’ relationships is unstable. The ambiguous gay themes were simply not acknowledged by the reviewers and critics in 1947. The New York Times reviewer apparently couldn’t engage with the film at all, calling it incompetent, ‘a Technicolored mistake.’ The first Encyclopedia of Film Noir included the homicide soaper Leave Her to Heaven but for some reason left out the more fundamentally noir Desert Fury.

Director Lewis Allen’s best pictures are likely the cultured ghost story The Uninvited and his equally stylish noir action thriller Appointment with Danger. Desert Fury’s direction may have been simplified to offset the cost of Technicolor — fewer angles, abundant process photography. The Arizona and California locations definitely bring back childhood memories of western towns before chain stores and McDonalds moved in. On drives across the desert we often passed suspicious stopover saloons, out in the middle of nowhere, with gaudy snake-farm signage. As this is Technicolor, everything is glamorous. Houses are nested in the beautiful rocks of Sedona (?) and colors look so bright and clean that they match the unreal look of stage interiors. Lizabeth Scott sports at least twenty changes of color-coordinated high-fashion clothing, courtesy of Edith Head. For dialogue scenes Desert Fury makes extensive use of rear projection of large still transparencies; the technical finesse of Farciot Edouart and Gordon Jennings keeps them from looking too artificial.

Original author Ramona Stewart’s other filmed work is the oddball horror item, The Possession of Joel Delaney. We’re told that the novel added more detail to the criminal and sexual activities of the characters; one noir compendium says that, in an early draft of the screenplay, the Paula and Fritzi characters were not mother and daughter but ambivalent longtime companions, like Eddie and Johnny. Given only a quick walk-on in the first scene, albeit with a scowl on her face, is the beautiful Kristine Miller. Was she a friend of Lizabeth Scott?  Miller has a role in I Walk Alone (with several other Desert Fury cast members) but her most substantial part is in Scott’s body-count femme fatale noir Too Late for Tears.

The KL Studio Classics Blu-ray of Desert Fury is a radiantly beautiful encoding of this odd Technicolor noir, which like I Walk Alone has been out of circulation since the 1980s. It was screened frequently back at UCLA, but Paramount’s file print was a dim Eastman dupe made for a subsequent release — this Blu-ray looks far better. Miklos Rozsa’s brooding music score adds immensely, contributing a mood of danger and mystery not always reflected in the on-screen action. The film has almost no violence. Burt Lancaster does rough up John Hodiak, but the tension isn’t really expressed through physical conflict — a bucking bronco demonstration and a romantic horse ride in the desert are the action highlights.

A full ten Burt Lancaster trailers are included as extra, and also a fine commentary by author Imogen Sara Smith, that will fully satisfy fans looking for academic analysis and insights into the film’s actors and dark themes. Ms. Smith immediately hits on the queer associations that make Desert Fury a cult film, but she rejects the idea that it’s intentionally camp. Smith tells us that the film was intended to be Burt Lancaster’s debut, which is why his is the dull supporting role. She details the lives and careers of the film’s stars, and reports changes made between the book and the movie. Stewart’s book doesn’t have a gay theme, but Fritzi is far more corrupt in print — her wealth comes not only from the Purple Sage, but a string of Chuckawalla brothels. With gambling both legal and promoted by states, Fritzi comes off as a ‘vice queen’ more because of her influence over a judge, not because she runs a casino.