Sherlock Holmes fans have another good version of a favorite Holmes tale to savor, a late German silent film in full expressionist mode, set on an impressively moody English moor. One can see the influence of silent action serials and then-recent haunted house horror hits. And it is said that this is the first picture that presents Holmes and Watson as a fraternal ‘buddy’ team. A major reconstruction of a film once thought lost; presented with informative extras and (on the Blu-ray) a second encoding of a much earlier film version. 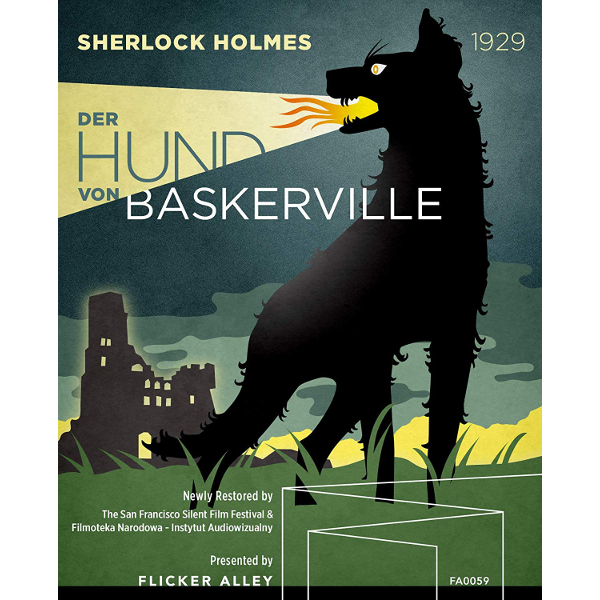 Fans of monster movies may be obsessed, but the truth is that they have nothing on the legions of fans of Sherlock Holmes, who analyze  the original books and short stories as if studying holy scripture and endlessly criticize the movie and TV versions. Famous folk get into the act as well; Billy Wilder said that Germans of his time were more fanatic about Sir Arthur Conan Doyle than were the English. His adventure-comedy The Private Life of Sherlock Holmes was the culmination of a lifelong desire. Silent European film adaptations were produced almost as soon as the stories came out, making the famous Universal Basil Rathbone series we know a much-later development. Popular TV shows continue the legend of one of the top pop culture heroes.

The Hound of the Baskervilles (1901) is the most-produced Holmes novel, possibly because it features strong horror elements in addition to deductive crime-solving fun. It’s therefore natural that one of the best screen versions is Hammer Films’ 1959 version starring Peter Cushing, which stresses the horror element. Why didn’t Hammer follow up with more Holmes adventures with Cushing?

The 1985 Hardy Horror Encyclopedia listed a version then thought to be lost, a 1929 Der Hund von Baskerville. Its director Richard Oswald was a veteran of classic German Expressionism and the father of the American director Gerd Oswald. Hardy’s contributors found old film journals that described the Oswald Hund as second-rate. It’s now thought that the negative notices reflected a bias against silent productions, as sound was coming in. The impressive picture wasn’t even exported to English-speaking countries; author Sir Arthur Conan Doyle reportedly saw it in Denmark.

The restoration on Flicker Alley’s disc, representing an effort between archives and enthusiasts in Germany, Poland and San Francisco, is a revelation. Not only is Der Hund von Baskerville good, it’s a great showcase of German filmmaking from a time just before the advent of talkies put the brakes on silent stylistics.

The storyline has been changed to follow an earlier play (written by director Oswald and Julius Philipp), but we’re told that Oswald’s film may be the first to present Holmes and Watson as a buddy team, investigators collaborating in high spirits. In the books Watson is mostly Holmes’ chronicler, and isn’t always present at the scene of the crime. Earlier film versions minimized Watson’s involvement, or eliminated him completely.

This 1929 iteration, lavishly produced, follows in the ‘action serial’ format favored by continental adventure shows of the ‘teens and ‘twenties. Thus there’s an emphasis on haunted house details like trapdoors, kidnappings and outrageous murder plots. It’s also clear that Oswald was impressed by American horror pictures of the late ‘twenties, most of which took the form of spooky murder mysteries like Paul Leni’s then-recent The Cat and the Canary. Cinematographer Frederik Fuglsang (Himmelskibbet) lends the show a full spook-a-thon visual treatment right from the beginning, with great lighting and atmospheric effects — billowing curtains, etc. We’re told that the actual indoor/outdoor moor setting was constructed in an enormous, disused Zeppelin hangar. Searching at night, a foreground figure sees a missing man quite a ways away, as a silhouette. 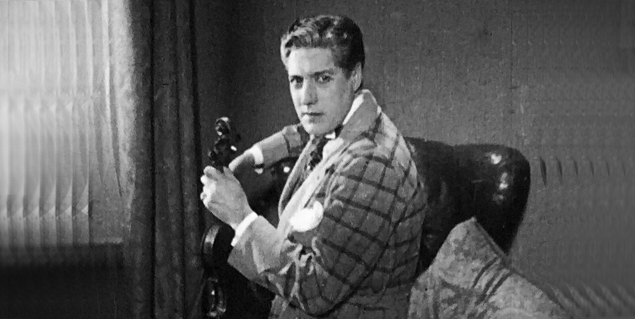 Richard Oswald lays on the smart camera angles and dynamic camera moves, giving the settings extra dimension and the characterizations more drama. In a scene supposedly happening in a confined, steep catacomb, the angles and lenses chosen make us feel the claustrophobia. For other shots Oswald performs compound camera moves that almost look hand-held. This is fluid, expressive silent technique.

The producing company Sud-Film seems to have had an international release in mind, for the main actors come from America, England, Italy, Austria and Russia. Storywise, Der Hund von Baskerville moves at a brisk pace. Many story developments fit right in with the Hammer version. The opening prologue covers the demise of Lord Charles Baskerville (Alexander Murski) in the jaws of a ‘hell hound,’ a killing that summons his son Sir Henry (Livio Pavanelli) and gets the ball rolling. The emphasis of the mystery isn’t on class hatred, but a simple dispute regarding family lineage. Sherlock Holmes (Carlyle Blackwell) is introduced playing the violin. He effortlessly deduces the reason for the visit of the Baskervilles’ family physician, Doctor Mortimer (Jarö Furth). The servants the Barrymores (Valy Arnheim & Alma Taylor) serve as rather transparent red herrings, and are related to an escaped criminal. Sherlock does indeed send his assistant Dr. Watson (George Seroff) alone to Baskerville mansion, as an advance scout.

This Dr. Watson is an enthusiastic younger man who clearly worships his best friend and colleague. Their greeting when Sherlock finally shows up on location — in a creepy underground tunnel — is well acted and directed, especially the way Watson’s expression changes from fear to exultation on recognizing his mentor. 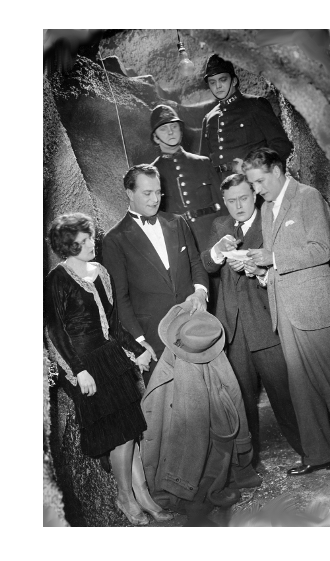 Two females are worked into the plot. Betty Bird’s flapper-like Beryl is prime kidnapping bait, to be sure. Carla Bartheel plays Laura Lyons, a more problematic character. The villain is easy to spot. ‘Stapleton’ is identified as a meek butterfly collector, but we know he’s up to something. He’s played by Fritz Rasp, whom silent film fans will immediately identify in villainous roles in Robison’s Schatten, Fritz Lang’s Metropolis, Spione, and Frau Im Mond; Pabst’s Die Liebe der Jeanne Ney, Tagebuch einer Verlorenen, and Die 3 Groschen-Oper; and Billy Wilder’s early script Emil und die Detective. Did I forget to say that Rasp is a familiar face?

The action finish is exciting enough, even if the hound itself is under-sold — I didn’t catch it wagging its tail, but in ‘scary’ close-ups it just looks like a jolly big dog.

Flicker Alley’s Blu-ray + DVD of Der Hund von Baskerville can hold its ground with other spooky attractions from the late 1930s. The entertaining thriller is for the most part in good shape. Digital clean-up has helped out, but the images sourced were good to begin with. The running time is shorter than the original, as part of a reel is simply missing. That section comes fairly early on, so only a few photos and explanatory cards are required to cover Watson’s relocation to Baskerville Hall, and the entrance of the leading lady Beryl.

Once thought forever lost, the show was reassembled from pieces found in a Polish archive; the Poles hadn’t done anything with it because it was of foreign origin — it actually bore Czech inter-titles. Some missing footage was sourced from a collector 9.5 mm print. The 35mm material had been assembled in printing order depending on what color of tinted film stock was to be used (blue for night, yellow for day, etc.) so made no sense when first examined. The show had to be completely reassembled using German records, and with original inter-title text taken from German censor files.

The music score is a dramatic piece by the ensemble of Guenter Buchwald, Frank Bockus and Sacha Jacobsen. 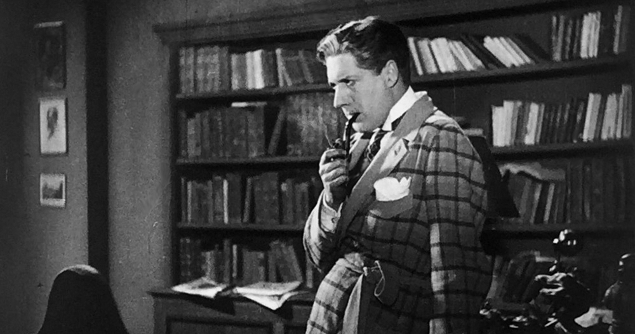 Flicker Alley’s release is the work of a consortium of Holmes fans and archival experts. Glen Miraker and Russell Merritt do the talking on a featurette dedicated to the appeal of the story, while restorers Robert Byrne, Elzbeta Wysocka and Russell Merritt describe how the presentation was brought together, with illustrations/samples of the original film elements on view.

On the Blu-ray release only is a 1914 version of the story by the company Vitascope GmbH. Richard Oswald co-wrote the play adaptation and the script, but the director is Rudolf Meinert. Filmed in a decidedly pre-expressionist style, the show uses minimal sets and stresses static scenes of entrances, the reading of a will, the arrival of messages, etc.. The villain is even easier to spot and the serial machinations aren’t up to the level of Fantomas or The Vampires. To capture the murderer, a man hides in a suit of armor!  The biggest difference, however, is that Dr. Watson doesn’t even appear — Sherlock Holmes comes on as a two-fisted Bulldog Drummond type, a professional mystery-solver.

The disc is part Polish-produced. Viewers have the choice of original German or English- translated inter-titles, and English or Polish subtitles.