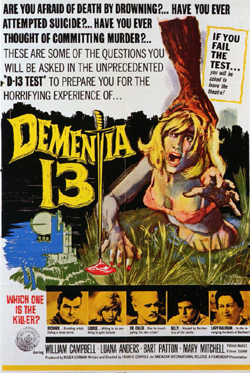 Though relegated to the sidelines for much of her time at A.I.P., Luana Anders could at least point to her starring role in Francis Ford Coppola’s first legitimate feature, Dementia 13. It was after hearing his pitch about a mysterious psycho killer that producer Roger Corman gave Coppola the funds to proceed—and though an unhappy Corman asked Jack Hill to shoot additional footage to spruce up what he considered Coppola’s  too-stately efforts, the fledgling director was on his way to a legendary career.