This big, expensive and well-produced action-suspense Sci-fi epic mostly delivers on its promise to be Aliens at the bottom of the sea. At heart it’s a 1950s pulse-pounder with a bigger monster, a zillion times the budget and a script that does everything but make us care. We appreciate the likable characters but it’s too easy to predict who will ‘get it’ next. The realism factor is not bad at all, although the undersea explorer video training sessions should have given ‘how not to crack up under stress’ more emphasis. And can’t anybody properly mind those pesky nuclear bombs? 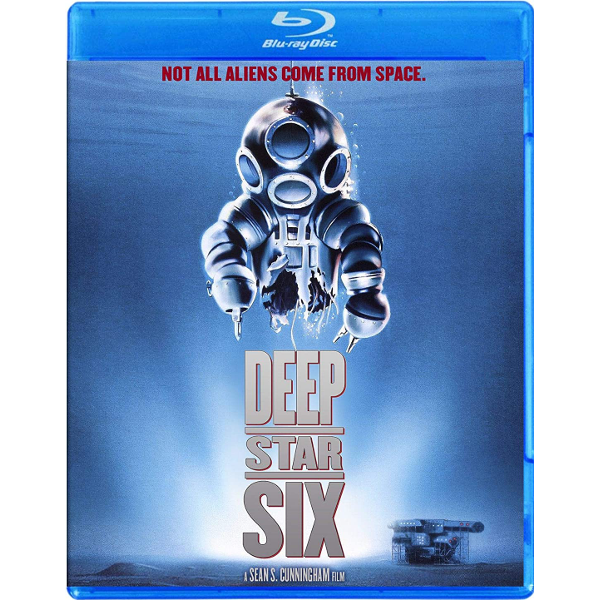 There was once a Hollywood axiom: if a big genre hit from a major filmmaker was on the horizon, Roger Corman could be counted on to rush out a low-budget knockoff. When James Cameron’s underwater sci-fi project The Abyss got into gear back in 1988 no fewer than four companies competed to be the first to make an underwater version of Aliens, complete with a gruesome monster.

Arriving first was DeepStar Six from Carolco, the smart action-meisters that mined pix by Sylvester Stallone and Arnold Schwarzenegger and in general made all the right moves that evaded Golan and Globus over at Cannon Films. Mario Kassar and Andrew Vajna didn’t scrimp on this tale of a monster attack at the bottom of the ocean, and it can boast what might be Sean S. Cunningham’s best job of direction. But no major star became attached. Although the film’s cast is more than capable, audiences probably couldn’t distinguish it from something Roger Corman might turn out for half a million — Corman’s own knockoff, Lords of the Deep arrived later in the year, right after MGM’s headache-inducer Leviathan. The big-budget contender DeepStar Six performed more like a Corman quickie.

Although the characterizations are acceptable, DeepStar Six is familiar ground for viewers familiar with claustrophobic monster romps signed by Cameron and Ridley Scott, not to mention Spencer Gordon Bennett, Edward L. Cahn and Christian Nyby. Thousands of feet deep underwater, Navy contractors are trying to install a missile launching station on the ocean floor. It’s a halfway happy crew of nice guys, workaday complainers, a taskmaster Captain and a rudely impatient project supervisor. They hang out at breakfast just like the crew of the Nostromo; instead of griping about unequal money shares they complain that they’re months overdue to be rotated topside.

The main DeepStar base is a fairly large modular construction, almost like the International Space Station. From there sub pilot McBride (Greg Evigan) delivers crew members to the forward work station, in a craft that docks identically to a space shuttle in orbit. Two of the three women at DeepStar Six entertain ongoing relationships. Joyce Collins (Nancy Everhard) has a pressing reason to find out if McBride is interested in marriage, while biologist Scarpelli (Nia Peeples) occasionally hooks up with co-pilot Richardson (Matt McCoy). The reliable Doctor Norris (Cindy Pickett) sticks to her job. Trouble enters via workplace squabbles and career pressure. Fearing that the project is in jeopardy of cancellation, supervisor Van Gelder (Marius Weyers) insists on using explosives to collapse a cave discovered under the proposed missile pad. Scarpelli cites strange disappearances in the area in the past, and rumors of monsters, but her objections are ignored. When things go badly, the hotheaded technician Snyder (Miguel Ferrer) adds fuel to the interpersonal problems.

Do you think something might go wrong?  With the beautifully designed underwater equipment on view, just watching DeepStar Six work through its daily paces creates a lot of interest. But of course Scarpelli is proven correct. Van Gelder’s screw-it-all approach to construction disturbs an Indian Burial Ground underwater monster’s lair and all hell breaks loose. Two functionaries in a mini-sub are the first to tangle with an unseen creature that disables the forward post and almost pushes it into an (I have to say it) abyss in the sea floor. A desperate rescue at the half-crushed forward post ups the body count to four. When the main sea lab comes under attack, the survival of all is threatened despite a well-coordinated technical response. Before you can say Captain Crane and Admiral Nelson, pipes are bursting and sparks are sparking. DeepStar Six soon becomes a soggy death trap, a bashed and battered high-tech Habitrail in a bathtub.

We never find out why in blazes live nukes are present at what is established as a construction site. Does the Pentagon deliver nuclear missiles to land-based silos before they’ve been built?

The rattled survivors only want to secure the nuclear warheads and use the escape pod. The powerful monster wrecks their life support system and cuts the power to the survival-essential decompression chamber. The team’s workaround for the problem requires skill and ingenuity. It’s like Apollo 13 but on the bottom of the sea (and with a monster and a nuclear threat). At least Tom Hanks didn’t take any warheads with him to the moon.

The interesting wild-card character is Miguel Ferrer’s Snyder. Instantly recognizable as Morton, the hiss-able corporate climber in RoboCop, Snyder puts everyone in quadruple jeopardy out of simple blockheaded thoughtlessness. The missiles need to be made secure, but Snyder rushes to a decision to blow them up, based on a computer prompt asking if the sea lab is under ‘aggressive attack.’ These nukes lack the most basic safeguards, no launch code, no sets of keys, nothing — anybody with a procedures manual can set one off. Additional race-against-the-clock ‘suspense’ is imposed by a blinking bomb set to explode. The problem is that we saw that particular been-there-done-that situation many times over in 1980s action sagas. We still care, but we are less invested in the suspense.

Perhaps realizing that there’s absolutely nothing new in DeepStar Six, the producers pour on the production value — and the violence. The sub hardware impresses but we quickly understand that the real subject is a parade of grisly deaths. Depressingly, with one exception the cast members are eliminated in a wholly predictable order; this kind of movie is no place to be a racial or ethnic minority. Considering who the director is, we really should see a calendar somewhere give the date as Friday the 13th.

To the film’s credit some of the deaths are off-camera, and just as effective. But to quote Spencer Tracy, the onscreen slaughter is ‘cherce.’ A circular hatchway catches a man in mid-transit, as in an old movie about an invading alien spaceship/submarine. Another nice guy is trapped when his legs are crushed. Later ‘oopsies’ resemble more industrial accidents in extremis. They include a tragic accident with a spear-like weapon (think Yaphet Kotto in Live and Let Die) and an unpleasant demonstration of gross decompression effects (made cartoonishly grotesque in the same year’s License to Kill). Other direct monster attacks are just icky.

After a couple of these gore events the narrative collapses just as in a slasher picture — with no chance to root for the deserving undersea workers to all get away (wouldn’t that be a surprise?) we withdraw our emotional investment in their survival. The good news is that DeepStar Six is not egregiously cynical — it doesn’t aim to fully demoralize the audience. The bad news is that nothing even slightly original occurs. There’s even a false-climax ‘boo’ attack that ignores basic science — a creature living thousands of feet underwater needs to decompress before rising, just like the humans do.

The Greg Nicotero- supervised monster is rather generic, sort of an underwater Tremors worm. It’s well done yet not really exciting. The underwater special effects are less impressive, with unusually clear water and subs that move like spaceships in zero gravity. The final on-the-surface scene was filmed in an old-fashioned water tank with a painted cyclorama background, the kind with a grossly foreshortened horizon. Today it seems as artificial as rear projection in a car interior. ↑

I liked all the acting and personalities. The relationship clichés are not offensive even if some of the banter is a bit weak — that ‘Henway’ joke. We wince when characters talk about their kids back home, or a farm in New Hampshire, knowing that such idle chatter is usually a sure death sentence. Taurean Blacque ↓ is likable as the Captain, and the Russian played by Elya Baskin (shifted over from 2010: the Year We Make Contact) is a pleasant familiar face. South African Marius Weyers is fine as a boss who starts as a jerk but shows what he’s made of when things go very wrong. At one point, two submariners leap to fight each other in the middle of the mortal crisis. When they calm down they shift directly back into cooperative-reasonable mode, perhaps a little too quickly. I just saw that same scenario, albeit a lot less nimbly handled, in the similar siege-against-marauding-monsters opus Invisible Invaders.

That still leaves us with Miguel Ferrer, who can’t get a break. His Snyder freaks out and ends up sabotaging the efforts multiple times, to the point that we’re shocked that they leave him alone for a second. He’s as bad as the deranged space cadet in It, The Terror from Beyond Space who just takes it upon himself to ‘un-shield the reactor’ and irradiate an entire spaceship. Still, Ferrer plays the character so well that we feel no joy when he makes his exit. Snyder wasn’t a bad guy, really. It only reminds us that we miss Mr. Ferrer’s good performances, in Twin Peaks and Traffic.

Bottom line?  DeepStar Six is a lavishly produced, nicely directed standard monster jeopardy thriller, with acting way above expectations. But for its price range, it probably needed to offer something more — stars, a more original storyline.

The KL Studio Classics Blu-ray of DeepStar Six is a lavish special edition, with many newly-produced extras. The film transfer is flawless and the audio mix quite good. Da fans dayz gonna love it, ya know?  I thought it well worth a looksee.

A verbal clue tells us that the Sean Cunningham / effects supervisor James Isaac commentary was recorded around 2000. Cunningham starts off well but every time I dropped back in to listen I landed in the middle of a lengthy audio hole. Writers Lewis Abernathy and Geof Miller share a good laugh about their experience. I assume they eventually told us more about the movie (besides making mock apologies for it). Another track combines isolated music score samples with a partial commentary by composer Harry Manfredini.

Perhaps the best items are a trio of new, smartly edited interview featurettes. One gathers up the monster crew, another the stunt coordinator, and a third is a pleasant visit from the personable leading players Greg McEvigan and Nancy Everhard. The very capable actors are candid and forthright, and neither seems daunted by the fact that they haven’t earned multiple Oscars. About halfway through this movie my main concern became sympathy for the performers. The shoot must have been a real ordeal, trying to be natural working for weeks in murky water and in such cramped surroundings.

Kino doesn’t scrimp on incidental items, like uncut EPK video footage. A full list is below. This can’t have been a fun show for all the technicians and floor effects people either… the first lesson taught on those wet sets must have been ‘how to handle electricity safely.’