Let’s hear it for ‘undiscriminating’ audiences, the kind that want nothing more in a movie than a hundred minutes of combat action, suspense, scary monsters and gross-out gore. They’ll get their fill in Stephen Sommers’ Cuisinart blending of Titanic, Aliens and Die Hard. It’s quality fast food exploitation; just keep your medicine handy if you’re allergic to brainless cornball dialogue. 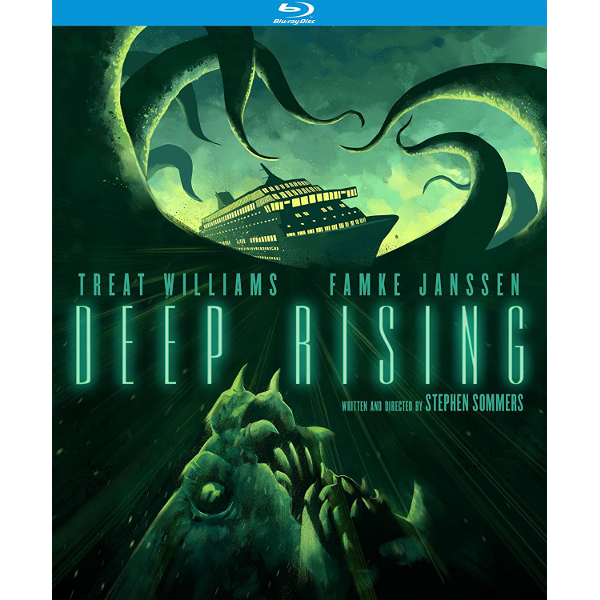 Deep Rising must be the most commercially calculated production of 1998. We can hear the pitch now: it’s Titanic crossed with Aliens crossed with Die Hard: constant action, gore and spectacle with scary monsters. Shamelessly exploitative, the highly polished show gives casual blood ‘n’ gunfire fans exactly what they want, without pause for even the slightest scene that might suggest that the show has a reason to be. The description just above is all the reason the show needs. It’s a total action machine, the kind of guaranteed crowd pleaser where not a minute goes by without an axe cleaving a head or someone being dragged to some god-awful bloody death.

It certainly has energy, starting with Jerry Goldsmith’s driving music score. The characters are one-dimensional but each is well cast and played with total conviction. Treat Williams, Famke Janssen, Kevin J. O’Connor, Wes Studi and Djimon Hounsou give it their all, although I doubt any of them have saved Deep Rising a prominent place on a résumé.

The millionaire guests aboard the cruise ship SS. Argonautica in the South China Sea celebrate as if it were New Year’s Eve in The Poseidon Adventure. Speeding toward them is a renegade motor patrol boat captained by John Finnegan (Treat Williams), whose motto is that he asks no questions if the money is good. John and his mechanic Joey Pantucci (Kevin J. O’Connor) are not happy to discover that their clients are vicious mercenaries, and their cargo boxes of high-tech torpedoes. The mercenary leader Hanover (Wes Studi) has a confederate on board the Argonautica, who disables the ship’s systems on cue, leaving it dead in the water. But something else is very seriously awry: when the pirates from the patrol boat finally board the giant ship, they find nobody alive, just blood and shredded human remains. As they raid the ship’s vault, a few survivors do turn up: the Captain (Derrick O’Connor), the owner (Anthony Heald) and a sexy jewel thief, Trillian St. James (Famke Janssen). But the ship is still infested with horrible ‘things’ that kill with alarming speed. Even with their fancy guns, the high-seas pirates are no match for the monsters — will anyone survive?

Glossy, disposable action films of all kinds were Big $ Bucks in 1998; the director Michael Bay could seemingly do no wrong, no matter how stupid the project. Director Stephen Sommers would soon make several successful but awful Mummy movies and spin-offs, and then become bogged down in a false start on a Universal Monster Franchise. Here Sommers concentrates on the kind of non-stop excitement that translates to every action audience from Hong Kong to Timbuktu. The attractive and well made show features excellent, expensive visual effects (for 1998), plus monsters and gore effects designed by Rob Bottin, the past master of the remake of The Thing. There’s no denying that Deep Rising is an efficient thrill machine. The action is mostly good and the characters fun — the only truly dumb aspects are a couple of action climaxes and some witless dialogue now and then.

What do the thrill fans get for their money? A lot of gross-out action that will seem awfully familiar. Various soldiers with fancy machine guns (the kind that never need reloading) split up to wander alone through the wrecked cruise ship’s creepy corridors, a la the template horrorshow Alien. A woman is apparently sucked down a toilet, an ‘Eeek – ha ha’ moment reminiscent of the remake of The Blob. A half-digested victim stands and tries to talk, yielding a part-CGI equivalent of Rob Bottin’s earlier gore spectacles. Forty years before, the hero of the classic Quatermass 2 saw blood dripping from a duct, and exclaimed “That pipe is blocked with human pulp!”  Fans disappointed that the human pulp wasn’t seen will now get their fill in Deep Rising, when an entire wrecked ballroom is discovered to be littered with mangled human remains — ‘this luxury liner is wallpapered with human pulp!’

The graphic mutilation of human bodies (plus plenty of expletives) earn the movie a hard ‘R’ rating. In Sommers’ The Mummy of the next year, the same kind of gore effects got a PG-13, because the desiccated bogeymen were made of dust and little or no blood was involved. Thus little kids could be thrilled by people with holes through their bodies, etc., being chopped to pieces or blown to flinders. Especially fun is Anthony Heald as the ship’s fat cat owner, the sniveling capitalist that’s been the too-easy fallback villain since at least RoboCop. Heald’s broad overplaying was almost too much for The Silence of the Lambs but his exaggeration perfectly suits the action here, which is basically a ’30s action serial with ’80s brutality and ’90s CGI effects.

The monster of Deep Rising is one of the more unmotivated menaces in monster movie history. Tell me again why it chooses to make its appearance right in the middle of the crime of the century? (This of course has been a common occurrence dating back to Beast from Haunted Cave). It’s a writhing mass of squid tentacles, with H.R. Giger- like multiple mouths at each tentacle tip, and a redundant, very non-Squiddish mouth up top as well. Everyone thinks they’re fighting many individual monsters, when each of dozens of tentacles can snake its way throughout the ship’s dozens of passages. When unseen, the monster pulls off all kinds of scary tricks. Excellent effects show metal walls and bulkheads being dented and deformed by the powerful monster flesh. We don’t have enough time to wonder why a creature that has eliminated thousands of passengers in less than an hour, can’t manage to gobble up eight individuals. But that’s a question of logic, and we all know that pursuing logic in this kind of show is madness. Madness, I tell you.

Stephen Sommers wrote the film as well. His dialogue is often sharp and to the point, but it’s also laced with generic groaners, that unnecessarily remind us that we’re watching multi-million dollar trash:

“I’ve got a really bad feeling about this!”

“Are we talking about some kind a mutated sea monsters here?”

“Now there’s something you don’t see every day.”

“We’ve got to get out of here! This thing’s going to blow!” After all the classy effects and genuinely good scares, the story gives us a cartoonish finish, with people escaping on a Jet Ski that can outrun fireball explosions, a torpedo rigged for ramming as in The African Queen, and a ship that blows up as if every deck was cast from plastic explosive. Just when the finale does something decent — allowing a favorite character live — it opts for a lame ‘here we go again’ cliffhanger story button.

Movies like this wiped out the market for cheaply made action, horror and sci-fi pictures, the kind that once allowed unconnected outsider talent a path to a moviemaking career. ‘Cheap’ is direct-to-video slop like the Sharknado series. There are some exceptional foreign-made monster pix with original ideas, such as Joon-ho Bong’s The Host. The thrilling Attack the Block has more humor and feeling, and less gore. Both have story frameworks that are basically humanist. I would have to say that Deep Rising is more competent and less frustrating than similar claustrophobic monster rallies, like Leviathan, Event Horizon and Deepstar Six. All have settings that could be transposed from the ocean to outer space, or vice-versa. Deep Rising has one nicely timed laugh with some elevator music, it must be admitted, and for my first viewing held my complete attention. But I keep forgetting to put a basket next to my TV monitor, to park my brain while watching. It’s just not needed.

The KL Studio Classics Blu-ray of Deep Rising is another one of Kino’s fully loaded special editions. The beautifully filmed show is certainly easy on the eyes, and the first-wave CGI effects are far better than what was seen in films just a couple of years earlier, like Species. Jerry Goldsmith’s score amplifies the film’s thrills with good action music and nice flourishes of jarring noise when those slimy monsters attack.

The list of extras analyzes Deep Rising as if it were the Movie of the Year; if you’re the kind of viewer that likes to pore over effects descriptions in magazines you’ll be in heaven. The personable director Stephen Sommers shares a commentary with his editor, Bob Ducsay. A section of filmmaker and technical interviews gets direct input from three of the actors, the famed cinematographer (here a second unit director) Dean Cundey, and a score of visual and makeup effects people. It’s a good way to see what was ‘real’ and what was digitally augmented. Some ILM visual demonstrations are included as well.

The cover art is reversible. I’m choosing the new Jacob Phillips art with the moody graphic of the ship menaced by cartoon tentacles. It’s a good fit.