Dario Argento in 4K — that sounds like a good idea, especially for his more visually jolting giallos. Arrayed in garish reds and blacks, this blood-soaked mystery shocker emphasizes exotic murders — stabbings, scaldings, lacerations from broken glass. David Hemmings is again the investigator, digging into evidence sourced not in photographic details, but the hidden artwork of a disturbed child. Techniscope images by Luigi Kuveiller and music by Goblin, with abbondante gore orchestrated by Signor Argento at the top of his form. 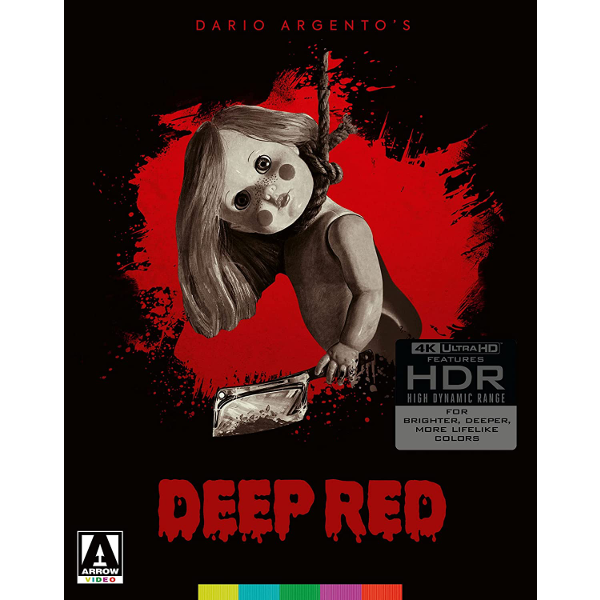 Deep Red hasn’t changed; it’s still one of the top titles of ’70s Euro-horror as honored by thirty years of fawning analysis by genre critics. I’ll breeze over some of its salient points, at least as received by this viewer and get right to the main question for the fans and collectors that know the picture well and are the logical buyers of this special edition in an even better video format: what’s the 4K edition going to do for me that the earlier special edition Blu-rays can’t?

Deep Red displays Dario Argento’s visual talent at a high pitch. The storyline isn’t completely absurd and much of the acting is quite good. Although gruesome killings and bloody gore are still the main attraction Argento’s direction has laudable qualities and his sub-Hitchcockian cinematic games have merit. The cinematography is almost hypnotic, with Luigi Kuveiller’s camera gliding through sumptuous settings that feed the eyes. The butchery by cleaver, razor blade, and any available household cutting device is fetish-ized to the point where being murdered almost looks glamorous, desirable. The first acknowledged giallo introduced the notion of a smorgasbord of murders, but Argento focuses not on a desultory police investigation but instead the ‘good stuff’: tricky story twists and outrageous carnage.

Profondo Rosso combines spiritualism with a structural debt to Michelangelo Antonioni’s Blow-Up. While trying to aid an inebriated colleague on a street corner, jazz artist Marcus Daly (David Hemmings) witnesses the gruesome murder of Helga Ulmann (Macha Méril) in an apartment window. He spots a culprit in a shiny raincoat. Marcus teams with the provocative reporter Gianna (Daria Nicolodi), who seems more intent on seducing him than getting a good story. More murder attempts involve Ulmann’s psychic colleagues and Marcus’s own friends. Could this be the work of a mad killer?  Cue the intense visuals of a gloved fiend playing with an odd array of toys, before going out to commit another crime. Personally targeted, Marcus feels surrounded by too many suspects.

Argento begins with a stylized flashback to a nursery, where visions of a knife apparently imprint a child’s psyche for life. Dazzling visuals recur at a psychics’ convention in a large opera house and in a victim’s apartment with its unusual artwork. Psychic powers are linked to artistic sensitivity. Meanwhile, Argento’s camera aestheticizes everything it touches. Precise trucking shots follow objects on a table and feet pacing on a polished floor. The visuals emphasize a tactile experience — exposed flesh looks all the more vulnerable.

Deep Red singles out women for its worst physical abuse. In a bathroom of polished tile a struggling woman is forced into a tub of scalding water until her face is one huge blister. Before she dies she’s able to write a note into the steam fog left on a floor tile, just as in Hitchcock’s The Lady Vanishes. Instead of seeking the killer by reprinting photographic negatives, David Hemmings’ Marcus studies some violent crayon drawings by a seemingly disturbed child. In the most eerie suspense sequence he breaks through a wall in a fancy villa to find a secret room. As can be expected, the actual killer is a surprise.

David Hemmings takes his role seriously, a good sign indeed. Perhaps the actor responded to the film’s classy imagery. Dario Argento’s girl friend Daria Nicolodi provides smiles and a pleasant attitude, although the writing of her romantic scenes isn’t all that clever. If Argento aimed for a screwball tone to offset the grim killings, all he shows is that he has no flair for dialogue. A lot of Gianna-related material appears to have been excised for the shorter International version. Although no unforgettable horror beauty arrives to rival Barbara Steele, actress Macha Méril does possess a unique look. Argento also makes a respectful nod toward Italo film history with a highly visible role for Clara Calamai, of Visconti’s classic Ossessione. Calamai plays a fussy retired actress, who is also the mother of the main suspect, Marcus’s good friend.

Whenever Goblin’s rock music is heard, Argento’s filmic murder machine goes into high gear, cueing precise insert shots of the killer donning zippered leather gloves and choosing an appropriate murder weapon. But the modes of killing become more varied. The only really over-the-top scene has a victim snared by a garbage truck and thrown into the middle of traffic, a really distasteful demise. A final wipe-out killing probably does a good deed by making viewers more aware of the hazards of elevators — heavy machinery can be really unforgiving. As Kurt Vonnegut Jr. would say, ‘so it goes.’

My favorite scenes in Deep Red take place on a modern city square that might be a set at Cinécittá: a traffic intersection ringed with concrete apartment blocks, a cement roadway, a lonely statue or two and a brightly lit Hopper-like eatery called ‘Café Blue.’ Some of the strange places I dream about resemble this under-populated, oddly scaled set. It has a powerful oneiric personality.

Arrow Video’s 4K Ultra HD of Deep Red 4K is quite a package. It’s basically a go-again for the 2016 special edition Arrow Blu-ray, which at the time was considered an ultimate item: remember the late 1990s, when companies released the initial DVDs of these shows, and knowing fans jumped in to complain about missing scenes and other mistakes?

From what I can see and what I’ve read, Arrow Video rectified all the complaints on that last Blu-ray. This release’s two 4K Ultra HD discs contain both the original (127-minute) and shorter (105-minute) cuts, with Italian and English tracks and a full complement of subtitles. This is billed as a new 4K remaster job, not a reformatting. The Techniscope show is an unbroken series of beautiful, clean and colorful images.

Visually Deep Red is what I’d expect from the 4K upgrade. As the film was shot in 2-perf Techniscope, only so much fine-grain detail can be extracted from the original negative. It doesn’t look a great deal sharper but the image overall has a more impactful presence — the heightened contrast and more sensitive colors do make themselves seen, and felt.

4K’s edge is not going to jump out on smaller monitors. The added quality begins to pay off with monitors 65″ or more, and the real advantage becomes obvious on high-end equipment that’s even bigger, and projection setups, especially those with HDR. Yes, it’s an elitist format for high-end folk with situations approaching home theaters. Like I say, I’ve seen enough 4K now to the discs that really Pop. But I’ve only been knocked out with samplings on friends’ even higher-end equipment. If you have a 65″ set of good quality and know how to adjust it, you should see the difference.

Arrow has reproduced its Blu-ray package in 4K Ultra HD: No Blu-ray version is included. I went down the list of extras and saw that most everything aligned with the earlier Blu-ray release; sorry if something was dropped and I didn’t notice. Arrow’s insert booklet, also produced by disc producer Michael Mackenzie, is a good read for fans looking for quality ink on Argento. Added to essays by Alan Jones and Mikel J. Koven is a new item by Rachael Nisbet, on the film’s ‘visual architecture.’

The new commentary goes right to the experts, Troy Howarth and Nathaniel Thompson, who present a polished talk, nicely matched to the video.

Still, my favorite way to view Deep Red is to play the English-language track on the original version: whenever Italian-only material pops up the track reverts to Italian with subtitles. In this way we can see what was cut for the shorter release as we watch; we can also compare the overall quality of the two tracks.