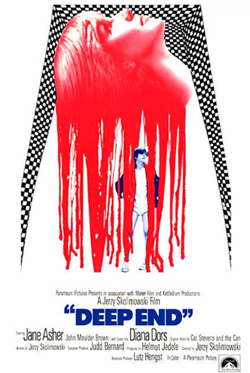 The swinging sixties came to a bleakly comic end with Jerzy Skolimowski’s undeservedly obscure 1970 British-German coproduction, a strikingly original study of obsession that descends into disturbing psycho-drama. John Moulder-Brown plays a repressed, near-infantile teenage bathhouse attendant who nurses a bizarre fixation with his enigmatic co-worker. No surprise really, considering that co-worker is played by auburn-haired Jane Asher at her most mysteriously seductive. A favorite of director David Lynch, who said, “There’s never been a color movie I’ve freaked out about, except one, this thing called Deep End which had great art direction”.