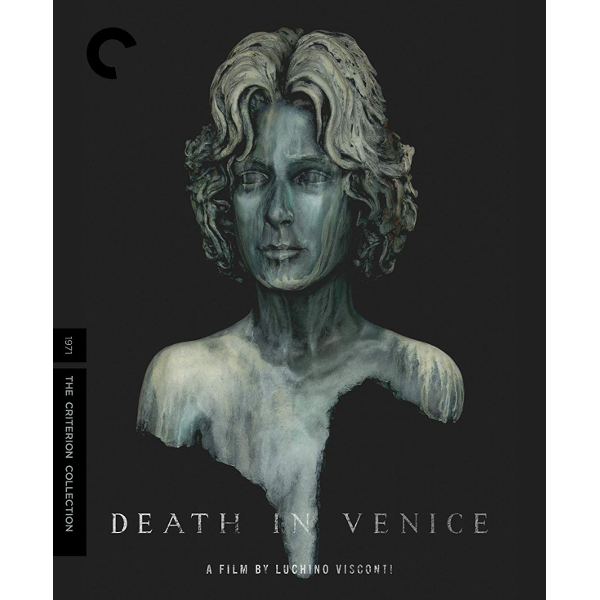 See Venice and die… or isn’t it supposed to be ‘see Rome and die?’  In other books and stories, foolish Englishmen steer clear of Naples when they wish to avoid the plague; epidemics scorched the principality of Napoli more often than conquering armies.

Luchino Visconti’s Death in Venice has a vaunted reputation, but Savant still finds it to be tough sledding, a sober and humorless endurance test from the aristocrat of Italian cinema. It’s a slow account of one man’s descent into obsession over a boy he sees in a Venetian hotel, circa 1910. Dirk Bogarde’s repressed German composer isn’t very compelling, and the changes in his character are difficult to follow. That, and director Visconti’s languid style makes it hard to decide what he’s after, beyond showcasing the film’s splendid decor and designs. Some critics find the film a fine study in frustrated homosexual longing; the main character behaves in such a repressed manner, that his desires would be clear to even a casual observer.

Suffering from an ailment, frustrated composer Gustav von Aschenbach (Dirk Bogarde) checks into the fanciest hotel in Venice and is fussed over by its manager (Romolo Valli). While recalling painful memories of his professional associate Alfred (Mark Burns) and his marriage to a beautiful wife (Marisa Berenson), Gustav becomes obsessed with another hotel guest. The precocious and sexually ambiguous Polish boy Tadzio (Björn Andrésen) is staying at the same hotel with his large family, and watched over by his elegant mother (Silvana Mangano). Gustav is told that the plague is coming to Venice, but does he not flee, as do most of the other guests. Although he and Tadzio are never even introduced, he finds reasons to remain in town.

A filmic adaptation of a famous novel, Death in Venice must have an intense interior world, if the basic plot outline is the same as Luchino Visconti’s film. The basic narrative here is easy enough to follow, but the main character is difficult to understand. He’s a stuffy composer with vague health problems and severe difficulties dealing with people. Formal and private, he talks almost exclusively to servants and hoteliers, becoming a neurotic mess when his ‘inferiors’ return his pompous formality in kind. A Gondolier ignores his instructions. The overly attentive hotel manager purposely lies to him, minimizing the dangers of the plague. 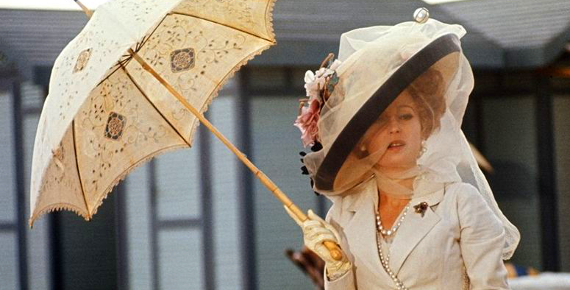 Visconti uses crude flashbacks to establish Gustav Aschenbach’s artistic conflict. Music associate Alfred argues with him constantly about the nature of art. Gustav thinks art stems from concentration and turning away from emotion and the chaos of life, whereas Alfred argues that real art must express ‘living’ elements, that the only real artists are wild sensationalists unfettered by the rules of society. Ah, so Gustav’s problem is artistic constipation?  He certainly behaves as if that’s the case. His only pleasure seems to come from observing that swimsuited, long-haired Tazdio. This isn’t as much the sin that cannot speak its name, as the case of a man ill-equipped to deal with any complications in his life.

It would be foolish not to interpret Gustav’s two-plus hours of unrequited, frustrated, repressed adoration as a sexual longing quietly screaming to express itself. The way it plays in the film, Gustav is a crumbling personality, unable to cope with his own adoration of an underaged boy. Tadzio, a well-to-do Polish kid on vacation, is the one who would seem to be sexually ambiguous. The homosexual vibes come from his direction, as he constantly acknowledges Gustav’s interest with return glances. Is Tadzio a innocent, an inexperienced clean slate on which Gustav projects his desires?  Or is he an impish male Lolita?  That’s the way I read Tadzio’s passive-active flirting behaviors.

Presumably it’s all deeper and more compelling in the book. In the movie, the mechanical flashbacks show us little about Gustav except that he’s stubborn and intransigent, and badgered by an annoying friend. We see a tragedy with his daughter in those flashbacks, but don’t really learn much about him. Are Gustav and Alfred meant to be lovers? The arguments with Alfred suggest that Gustav’s fixation on Tadzio might be only an aesthetic fascination, the kind of inspiration Alfred says is lacking in Gustav’s music. We’re meant to assume that Gustav is already a famous composer, but we’re given no evidence, unless the melancholy and emotional Gustav Mahler compositions that cover the film are supposed to be his music. If that’s the case, he’s a genius. Gustav doesn’t do anything musical in his hotel stay. He doesn’t react in one way or another to the waltzes frequently played by the orchestra in the hotel lobby.

This is very interesting — as a luggage problem.

Gustav Aschenbach checks out of the hotel, but then uses a mishap with his bags as a happy excuse to check back in again, so he can continue observing Tadzio. This is the bulk of the content of the movie. Physically, Gustav doesn’t seem all that unhealthy until the very end. We know he’s alarmed about the plague, but nobody else seems to be. There’s so little communication in the film, we aren’t sure if Tadzio’s Polish mother even knows what Gustav is saying when he tries to warn her. What’s clear is that Gustav is quietly driving himself nuts. 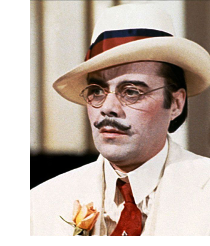 (spoiler) In the end, Gustav starts applying extreme makeup, exaggerated face powder and lipstick. Without more information, we don’t know if it’s a legit custom, a fad, or an oddball defense against plague germs. Visually, the effect is of a man transforming into a strange sexual dandy, a more subtle version of the painted grotesque we see on the boat in the beginning. His makeup also reminds us of the clown-like leader of an entertainment troupe that serenades and amuses the hotel guests one night. There are other symbolic emblems and ‘meaningful’ ideas about the nature of voyeurism to consider, but overall, these two hours and eleven minutes are so slowly paced, there’s little joy in seeking them out.

(big spoiler) Should I be reaching for the book?  The show raises some puzzling questions. When Gustav allows himself to be painted and made up like a corpse, is he meant to be finally relaxing, giving into his emotions and sexual instincts, as Alfred had prescribed?  Does he think he’s making himself younger, for the teenaged object of his affections? Or is he just breaking down emotionally and calling for help?  Dirk Bogarde has been hailed as a genius for this performance. He was excellent when playing evocations of gay men in movies from other periods and genres, as in Victim and Modesty Blaise. Gustav seems happy to die on the beach watching Tadzio wade in the water like Venus on the half-shell. He totters around for the last reel or so, and then all of a sudden is in dire straits. His hair dye melts down his fevered face. You Are There to witness a closeted disaster.

One of Criterion’s extras is a Visconti biography showing the villas and quasi-palaces where Little Luke grew up, early in the 20th century. The richness of the designs in Death in Venice must come from his personal memories and experience. The period costumes are breathtaking and the ambience around the sumptiously-appointed Venetian hotel is rich and detailed. The colors of Pasquale di Santis’ photography are also a pleasure to look at.

But Visconti gives the movie a surprisingly passive shooting style. Trucking shots are used sparingly, with most of the film covered with a long lens that pans and zooms over the beaches and hotel interiors. Individual guests are picked out rather arbitrarily until the camera finds Tadzio. The main set pieces take place in the lobby, the dining room and on the beach. They go on forever, and do little but highlight decor. We certainly get a sense of being in a specific place and time. The director communicates his mood by having little or nothing happen, and I can only guess we’re supposed to be intrigued by the constant parade of little details.

It takes three minutes for the titles to drag by, three more for a boat to reach a dock, and a full ten minutes for Gustav to reach his hotel. There’s the Mahler music to listen to, but unless one is already in the mood to appreciate a static contemplation of the beauties of Venice, there’s a lot of waiting involved in watching this movie.

I usually like ponderous movies. Perhaps if I had read the Mann book I’d have a completely different opinion. The critical adoration heaped on Luchino Visconti’s genius is fairly intimidating. And let’s face it, it’s easy to stand in awe of Visconti’s impressive career and so avoid a direct discussion of Death in Venice. I’ve seen and knocked over by quite a few of his pictures: Ossessione, Senso, White Nights, Rocco and his Brothers, his episode in Boccacio ’70, The Leopard, The Damned (1970) and even the Visconti segment in The Witches, The Witch Burned Alive.

The Criterion Collection’s Blu-ray of Death in Venice easily tops Warner Home Video’s DVD from fifteen years ago — the new 4K transfer can’t help but be sharper and more film-like in all those many wide shots. The use of a zoom lens flattens the perspective in many scenes, enforcing a Robert Altman look on the show. A big screen is needed to get the proper effect in close-ups. Warners’ disc was clean, but this is even cleaner. 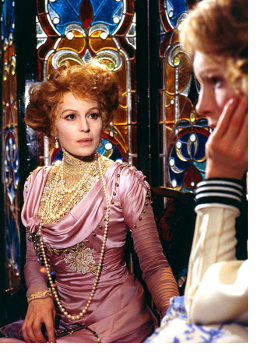 I read with concern reports that this new transfer, remastered in Italy, suffers from the same yellow-vision color wash that so irritated us with a couple of Sergio Leone pictures. I’ve looked at the disc on two monitors and I don’t see any such effect — Gustav’s white suits remain white, without a touch of jaundiced yellow; skies do not go a sickly green. If anything the picture looks a little cold for being filmed during a Venetian summer. One nice thing about digital equipment is that, if setting are left in a neutral position, we all see the same color values. That’s just one of digital Blu-ray’s advantages over the old NTSC system (Never The Same Color).

Criterion producer Curtis Tsui loads the disc with key-source video extras. An hour-long 2008 docu about Visconti has a high-toned attitude and some odd editorial choices. The director gives himself an extra credit card as music supervisor; in an already slow-paced show a lengthy clip from La Terra Trema appears twice. But the oddness is made up for by good input from directors like Francesco Rosi, and nice clips of Marcello Mastroianni working as a young man (in stage productions?). A short film by Visconti himself covers his casting process to find the film’s Tadzio. Stefano Albertini offers a new video essay on the picture, and the menu continues with pieces on the film’s music and costumes.

Also included is the old Warners’ promotional featurette. Although not much different than standard PR studio fluff, it does show the director passing a day’s shooting in the canals of Venice.

Death in Venice is certainly a beautiful addition to Visconti’s filmography. Having seen too many great pictures for the first time under terrible conditions, there’s something to be said for waiting for a fine presentation like this to take in an unseen great. I’m waiting to do that with two Visconti pictures I haven’t yet caught up with, Bellissima and Sandra aka Vaghe stelle dell’Orsa.