Richard Brooks’ exciting Humphrey Bogart picture is one of the best newspaper sagas ever. An editor deals with a gangster threat and a domestic crisis even as greedy heirs are selling his paper out from under him. Commentator Eddie Muller drives home the film’s essential civics lesson about what we’ve lost — a functioning free press. 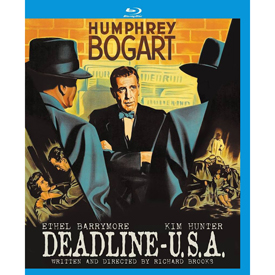 We Americans often look to westerns or war films or pictures about grand conflicts to define our patriotism. My patriotic heart more often throbs when touched by movies that exalt the real freedoms guaranteed by our government, or by institutions that have a social conscience and Do the Right Thing. Stories about our (formerly) Free Press move me the strongest, with the top slot filled by Samuel Fuller’s Park Row, a gloriously enthusiastic paean to the origin of New York’s tabloids. Fuller made his name with violent genre pictures but his heart was dedicated to his own definition of a Free Press, in which he believed fierce competition and a spectrum of viewpoints was the ultimate social good: even yellow rag editors eager to exploit sensational news took up Pulitzer’s challenge of editorial responsibility.

In the early 1950s film people with liberal leanings were sometimes encouraged to accept ‘patriotic’ anti-Communist projects, to provide proofs of loyalty. A religious outfit produced a noxious right-wing short subject called You Can Change the World (1952). It features some of Hollywood’s biggest right-leaning stars, but we wonder if a performer like William Holden might have become involved to stay clear of spurious accusations. So-called tough-guy writer Richard Brooks could easily have found himself in the blacklist crosshairs, but he was a loner who didn’t join organizations or carouse with political friends. Just the same, his novel The Brick Foxhole became one of the pillars of late-40s social conscience movies, Crossfire. 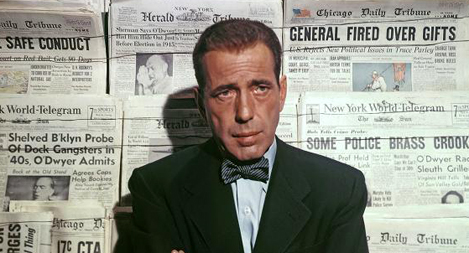 I like to think that Brooks chose Deadline – U.S.A. for his third outing as a writer-director because it’s an honest burst of patriotism that no right-winger could besmirch, a straight-on endorsement of aggressive independent journalism as a champion for the public good. Brooks’ screenplay was nominated for precisely nothing, when it’s an almost perfect dramatic entertainment; but Leo McCarey’s incoherent My Son John got a nod for Best Story. Without going to extremes, Brooks folds into his newspaper tale elements of romantic intrigue, dynastic politics in a wealthy family and a gangland threat. At the center is an editor of unimpeachable integrity — Humphrey Bogart straight from a grueling foreign shoot for The African Queen. The tone is as earnest as all get-out. Brooks and Bogie make with a grandstanding position speech or two, but the privilege is earned with great writing and solid filmmaking.

The large staff of the venerated daily paper The Sun is upset by the news that it will be sold to another daily that intends to chloroform the whole operation to eliminate the competition. Margaret Garrison (Ethel Barrymore), the widow of the great paper’s founder, cannot prevent her greedy daughters and their lawyers from commencing the sale. Even though the paper may be shuttered in just days, editor Ed Hutcheson (Bogart) throws all of his resources into attacking local mobster Tomas Rienzi (Martin Gabel), a vicious killer. A few employees defect or protest, but Ed gets strong help from a gallery of pros: sports columnist Harry Thompson (Paul Stewart), ‘sob sister’ Mrs. Willebrandt (Audrey Christie), gossip-meister Jim Cleary (Jim Backus) and daring investigative reporter George Burrows (Warren Stevens). As they unearth threads that might prove Rienzi guilty of major crimes, Ed must grapple with a new threat — not the violence that invades the newspaper’s editorial rooms, but an announcement from his ex-wife Nora (Kim Hunter), with whom he wishes to reconcile. She intends to remarry another man, citing Ed’s obsessive devotion to his job as the deciding factor. 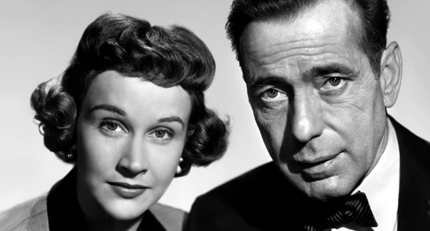 Do you like smart, tight screenplays in which all elements seem to interlock perfectly, and with dialogue so natural that it can’t be accused of overdone stylization or hardboiled cliché? Deadline – U.S.A. drops us into a marvelous newspaper environment, led by the ultra-cool Bogie and staffed with a galaxy of pro actors that transcend the notion of ensemble drama. Howard Hawks has nothing on Brooks, whose balancing of his newspaper unit is flawless. The various writers and editors talk a little bit in jargon, and a few try out a show-off statement or two, but they come across as motivated pros, not wisecracking cynics as in The Front Page or His Girl Friday.

All the supporting cast score in excellent parts. Jim Backus’ gossip columnist is a sophisticated juggler of confidential information, not a muckraker. Audrey Christie of Carousel and Splendor in the Grass is terrific as a ‘women’s feature’ specialist who comes up with a dynamite witness, an old woman (Kasia Orzazewski). Eager beaver reporter Warren Stevens takes one for the team when snooping too close to Renzi’s rackets. Ed Begley Sr. is the newsroom manager who comes to fisticuffs with an irate quitter (Willis Bouchey). Veteran Joe De Santis is a craven criminal who sells out his own sister. The slickest operator in the newsroom is the sports specialist played by Paul Stewart, who for once gets to be just street-smart, and not a crook. Stewart’s Harry Thompson pulls in another major connection to put Rienzi behind bars. 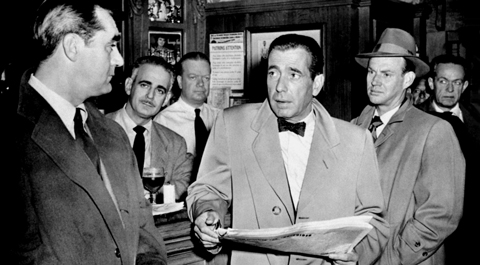 The upfront dramatics are first rate. Bogart and Kim Hunter (straight from A Streetcar Named Desire) have only a handful of scenes together, but they click as a convincing couple. Brooks manages to keep their actual relationship a secret until halfway through their first scene: we think they’re still married until Hunter’s Nora sets up a second bed on the sofa. Bogart’s sentimental scenes with Ethel Barrymore are also expert, favoring the depth of their friendship over the sad business at hand. The sale of the paper is almost a foregone conclusion, but Ed Hutcheson seizes the Rienzi investigation as a way of keeping the newsroom together until the final moment.

Martin Gabel (Marnie, The First Deadly Sin) puts life into the standard reading of the Urban Racketeer. Deadline – U.S.A. isn’t primarily a crime film, but it has one of the better gangland scenes of the ’50s. Rienzi’s men use an extreme method to spirit Hutcheson’s prime witness out of The Sun’s editorial offices. It’s frightening that it’s happening in 1952 and not during the time of Al Capone or Lucky Luciano.

Bogart must have loved the script, as his editor stays completely apart from the two or three violent scenes. Hutcheson is no genre superman. Brooks saves his itchy tendency to mount the soapbox, for a number of brief statements supporting the need for a free and independent press. Judging by the newspaper I read every morning, plus the disturbing way TV news is now ‘entertainment’ and the Internet a miasma of lies, I have to say that I get misty-eyed when a spokesperson in this movie from way back in the year I was born tells us that American journalism is already in trouble. Bogie gets his real grandstand in a courtroom scene. Unlike the dippy liberal sob speech in Bogart’s previous Knock on any Door, this oration has real teeth. If you want to wave a flag, this is the place to do it, although Brooks doesn’t beg the sentiment at all. It sounds like a cure for our present day woes. Free speech today is interpreted by many as the right to brandish a gun in public.

Smartly directed, designed and photographed, Deadline – U.S.A. is, I think, one of Richard Brooks’ best pictures. I’m surprised that it earned no Oscar nominations… was it perhaps considered too familiar or too corny? The year 1952 gave us writing nominations in three categories for the features 5 Fingers, High Noon, The Man in the White Suit, The Quiet Man, My Son John, The Narrow Margin, The Pride of St. Louis, The Sniper, The Atomic City, Breaking the Sound Barrier, Pat and Mike and Viva Zapata! The three winners were The Bad and the Beautiful, The Lavender Hill Mob and the wholly undeserving The Greatest Show on Earth, which also won for best picture. I think there ought to have been room in there somewhere for Deadline – U.S.A.. 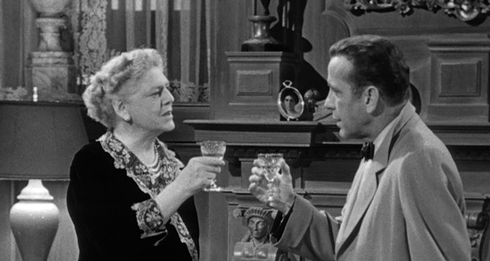 The KL Studio Classics Blu-ray of Deadline – U.S.A. is a Fox release given a primo scan and encoding. The images are silky smooth, without being optimized with digital tools that erase grain. The excellent sets and New York locations have an excellent dimensionality. The dramatic music score isn’t the film’s best feature, but all the audio is crystal clear. It’s a good example of a quality vintage disc.

The presentation extras include an original trailer that emphasizes the presence of two stars that just won acting Oscars. But the big draw will be Eddie Muller’s commentary. He starts off by asserting that Deadline – U.S.A. is not a film noir, and although many may be surprised, he’s right: wet B&W streets, crime and intrigues do not a noir guarantee. Brooks’ hero is not in the least conflicted in morale or morals, and neither is there a pessimistic philosophy undercutting the motivations of the people we meet. Tomas Rienzi is just a crook, plain and simple, and the story a highly sophisticated endorsement of our independent American press. Muller proceeds to nail fascinating stories about the dozens of character actors we see (the film has at least 30 speaking parts) and shows how Brooks folded real newspaper employees into the cast, even giving them lines of dialogue. He assures us that the hyper-sentimental barroom ‘wake’ for the paper is accurate. He also goes deep into the involvement of Brooks and Bogie. The star broke his usual work habit and didn’t learn his lines properly, and was upbraided by Ethel Barrymore on the set. Muller also analyzes the film as a newspaper saga, bringing in his own background in journalism and that of his father, who was a San Francisco sportswriter. Most Muller comment tracks are highly entertaining, and this one was so good that I listened to the whole thing immediately after seeing the movie, without a break.

One thing I stumbled onto on my own — Brooks’ first wife was actress Jean Brooks, of the Val Lewton movies. I don’t see any evidence of Richard Brooks casting her in an associated film, as he did with his third wife jean Simmons. But Deadline – U.S.A. does of course use Kim Hunter, Jean Brooks’ co-star in The Seventh Victim.