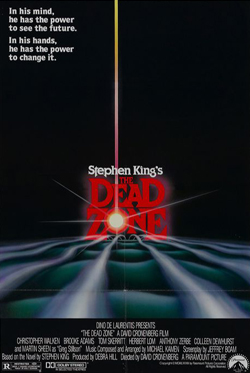 Screenwriter Jeff Boam’s adaptation of Stephen King’s 1979 novel is one of the best: a multi-layered psychic/political thriller with an end-of-the-world subplot. King’s crowd-pleasing theatrics help leaven the director’s clinical approach, resulting in one of Cronenberg’s most accessible (and financially successful) films. Christopher Walken is the doomstruck psychic who can foretell the future, supported by a solid cast including the great Herbert Lom and Martin Sheen (whose venal, two-faced politician seems to have anticipated several subsequent real-life candidates).