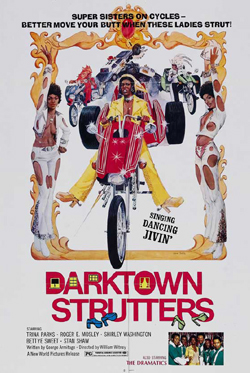 Veteran western and serial director William Witney, a Tarantino favorite who began his career as a bit player in 1934, cashed in his Hollywood chips with this penultimate, extremely cartoony and uncharacteristic effort. New World picked it up from Roger Corman’s brother Gene who produced it with Tennessee financing but was unable to find a distributor. When it proved a bit too bizarre for the general blaxploitation market, NW reissued it two years later as Get Down and Boogie, to similarly meager boxoffice returns. For years this was considered Witney’s last feature, but in recent years a German-US western called Showdown at Eagle Gap has surfaced on video from Echo Bridge.