Bogie’s back and Bacall’s got him! Or, at least she’s got his voice, and a bundle of bandages. A David Goodis hardboiled crime tale becomes an absurd pile of coincidences and accidental relationships, all wrapped up (literally) in a giant plastic-surgery gimmick. Bogart and his new bride Bacall are charming, but there’s a show -stealer at large: the great Agnes Moorehead plays the most entertainingly horrible harpy in film history. 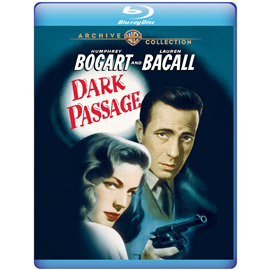 Dark Passage is a real puzzle picture. By pedigree and intent it’s film noir, but in all fairness it’s a confused movie with a gimmick that can’t disguise absurd coincidences and foolish plotting. It places its entire bet on the magnetic attraction of the Bogart-Bacall duo, a crowd-pleasing combo that guarantees a good time. Functioning best as a romance interrupted by some petty murders, it’s no endorsement for writer-director Delmer Daves. Hardboiled book scribe David Goodis did the original story. 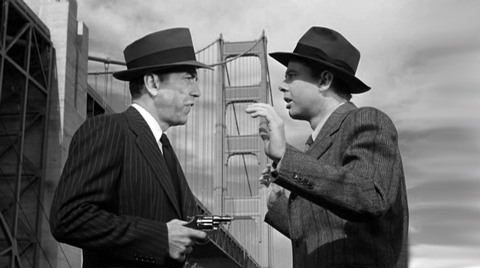 The movie can boast plenty of polished filmmaking and excellent location work in San Francisco. Convicted wife killer Vincent Parry (Humphrey Bogart) escapes from San Quentin. He’s lost on the roadside when along comes Irene Jansen (Lauren Bacall), an artist with a personal interest in his case. Irene picks him up and shelters him in her trendy apartment. Helped by a friendly cabbie (Tom D’Andrea), Parry gets a new face from plastic surgeon Walter Coley (Houseley Stevenson). Unfortunately, Parry becomes the main suspect when somebody murders his best friend. Parry also has difficulty hiding out at Irene’s: the clinging and spiteful Madge Rapf (Agnes Moorehead) is hanging around because she fears Parry has escaped just to murder her. It was Madge’s testimony that sent Parry up the river in the first place.

Don’t get me wrong: Dark Passage is highly entertaining and particularly desirable for fans that want to see some genuine chemistry between the new Mr. and Mrs. Bogart. I won’t go the direction of a surrealist critic from a while back, who placed Delmer Daves’ show on a list with King Kong, Peter Ibbetson, Duck Soup and The Night of the Hunter as pre-eminent examples of surrealism in film. The author assigned a surreal origin the film’s disinterest in coherence and narrative logic. That idea just seems absurd when one tries to imagine the efficient Warners company man Delmer Daves as a subversive artist. 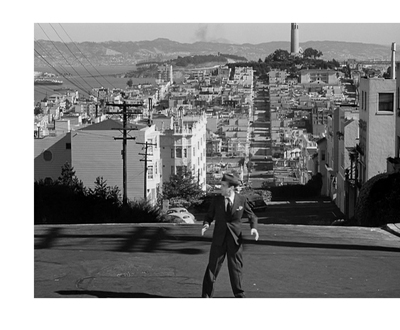 Dark Passage doesn’t need an artsy interpretation to make us scratch our heads. It breaks so many rules of logic and good plotting, it would appear to be assembled by a faulty computer programmed to place ten noir clichés in random order: Let’s call it lumpy, but entertaining.

The major plot device is that old sore thumb Plastic Surgery, a gimmick that fans probably didn’t appreciate. Even in new movies, plastic surgery is abused as a miracle face-switching device. We don’t see Humphrey Bogart’s kisser for almost a full hour into the movie. He starts out supposedly looking like somebody else, but we don’t know this for a few minutes because we don’t see Vincent Parry, only his subjective viewpoint, what he sees. The camera direction follows the lead of Robert Montgomery’s first-person camera experiment in the MGM film The Lady in the Lake. The Warner camera department does technical cartwheels on these sequences. They improve on some of Montgomery’s work, mainly through the use of partially hand-held cameras. We know Vincent is Humphrey Bogart because it’s his voice we hear. But that means that the first time we see Parry’s picture and it doesn’t look like Bogart, we’re confused. There’s also no surprise when the bandages later come off. The face revealed is Bogie’s without even any plastic surgery marks. It’s the face we expect to see and there’s nothing ‘new’ about it. So why hide the before-surgery image of Vincent Parry? Why the POV gimmick?

Frankly, the ‘let’s see things from Bogie’s POV’ trick makes this screwy story play as if it were an adaptation of a radio drama. It’s not, but it is easy to imagine everything working better on the radio. The plastic surgery story angle would seem more credible on the radio, with the actors describing things we can’t see, while we imagine how Bogart’s face had changed. 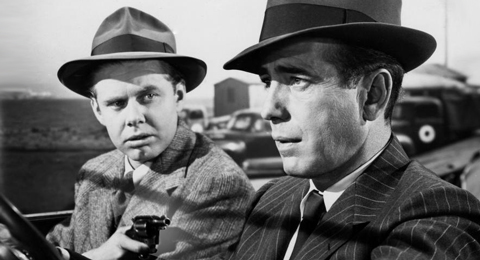 The script is lumpy but Delmer Daves direction is taut and economical. The supporting cast gets deep into the spirit of things. The first person to contatct the escaped Parry is a creep named Baker (Clifton Young), who later tries to blackmail him. Actor Young has a disturbing ‘baby faced killer’ look; he’s the guy who needs plastic surgery. Vincent’s best friend George (Rory Mallinson) is a swell guy willing to risk a prison sentence to harbor the fugitive. Given his narrow role in the movie, we know that poor George might as well have ‘potential victim’ written on his chest, in neon letters. The first cabbie Vincent rides with (Tom D’Andrea) turns out to be a heaven-sent connection for needy criminals in the Bay Area — asking nothing in return, and whisking him off to a plastic surgeon eager to work in the dead of night. Hmm, I should have listed the cabbie up with the film’s glaring coincidences.

The mechanical plot details are even stranger. Because of one remark overheard in a diner, a nosy detective (Douglas Kennedy) claims the right to demand a total accounting for who Vincent is and what he’s up to. But not that much earlier Vincent was able to walk up and down the steep Frisco hills for hours, in the midst of a citywide manhunt. His faced was wrapped up like Im-Ho-Tep, and nobody took the slightest notice. (spoiler) Vincent’s argument with the blackmailer Baker includes a fight and gunplay at Fort Point, the spectacular viewpoint at the South end of the Golden Gate Bridge. It’s a very public place but Vince is able to drive away unnoticed after leaving Baker dead. (bigger spoiler) And the demise of Agnes Moorehead is as silly and convenient an ‘accident’ as ever happened in a movie. Only Lee J. Cobb in Nicholas Ray’s Party Girl does a better job of maneuvering himself across a room, to facilitate an ‘accidental’ plunge through a window. 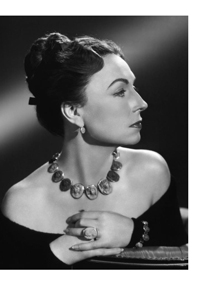 In the middle of this insane whirlpool is acting as good as can be found in movies of the day. Once he’s finally on camera Bogie is charming. Co-star Bacall never strikes an unconvincing note no matter how ridiculous things get. Perhaps this contrast — naturalistic performances in an absurd plot — was what the Surrealist book was reacting to. Agnes Moorehead creates a terrific shrewish monster in her character sketch for Madge. Moorehead is so grating that we wonder how any of her ‘normal’ friends can stand to be with her more than a few minutes. As an insane crime soap opera Dark Passage is so insane that, with a little encouragement, it might be possible to claim that it was some kind of narrative experiment by Delmer Daves. (pause) Nah!

In Nora Prentiss, another Warners noir from the same year, Kent Smith and Ann Sheridan run away from a similarly messy murder and impersonation. The grim story dovetails toward one of the most existentially downbeat conclusions in the style. With all the logic of a soap opera, Dark Passage ends with Bogie unaccountably in fine financial shape, in faraway Peru. All we see is one very chic ocean-side nightclub. Bacall meets him there and they dance to their favorite tune. So perhaps the ending is surreal — Lauren and Humphrey reunite in an exotic fantasyland, and a tale of murder and deceit ends up happily ever after.

That’s a really happy ending for Vincent Parry, a man morally entangled in at least four deaths. And don’t forget that his adultery contributed to the murder of his wife. He’s no misunderstood innocent, not by a long shot. I would guess that the movie is the way it is because Warners and Daves pushed it of shape to accommodate their hot star couple. See it in that spirit, and Dark Passage is eminently enjoyable, from its impressive location shooting to the undeniable attraction of its stars. 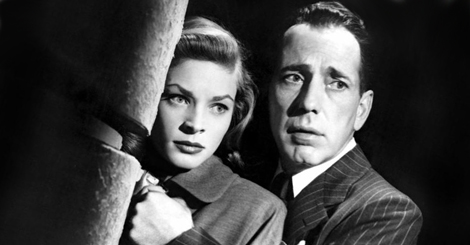 The Warner Archive Collection Blu-ray of Dark Passage is simply immaculate. I can name WB pictures I’d like on Blu-ray more, but it’s great to see this handsomely shot B&W picture in such superb condition. The close-ups of the stars look like portrait work by famous studio photographers, and the location scenes prowling up and down the hills of San Francisco are stunning. Even the rear projection is razor sharp. The multi-image montage that represents Vincent Parry’s plastic surgery operation is a flawless optical.

The extras keep pace with materials from the earlier DVD. A Looney Tunes short is the one in which animated caricatures of Bogie and Bacall make guest appearances. It appears to have been mastered in HD. In the short docu Hold Your Breath and Cross Your Fingers Leonard Maltin and other critical suspects analyze the film and its stars. The movie’s lack of success is blamed on politics, and so we are told how Bogart and Bacall went to Washington with the Committee for the First Amendment to offer moral support for the Hollywood Ten. The idea that Bogart and Bacall’s HUAC problems were the prime reason for the film’s failure doesn’t wash with this reviewer. Audiences more likely than not rejected the over-boiled thriller on its own merit, and word of mouth killed it. I mean, even Leonard Maltin is careful not to call Dark Passage ‘a good movie.’

It doesn’t matter now, as the film is still a lot of fun to watch.