Ah romance! A handsome stranger takes a room in your house, lets you feed him and doesn’t pay the rent — of course he’s the perfect man of your dreams. Excellent WB players Faye Emerson and Zachary Scott enliven an odd mix of moods in a tale of a murderous Bluebeard- boyfriend. Director Robert Florey’s thriller is half stylish spook show, and half romantic sitcom. With Dick Erdman, Rosemary DeCamp and perky Mona Freeman as the little sister who needs to be told, ‘Don’t you do what your big sister done.’ 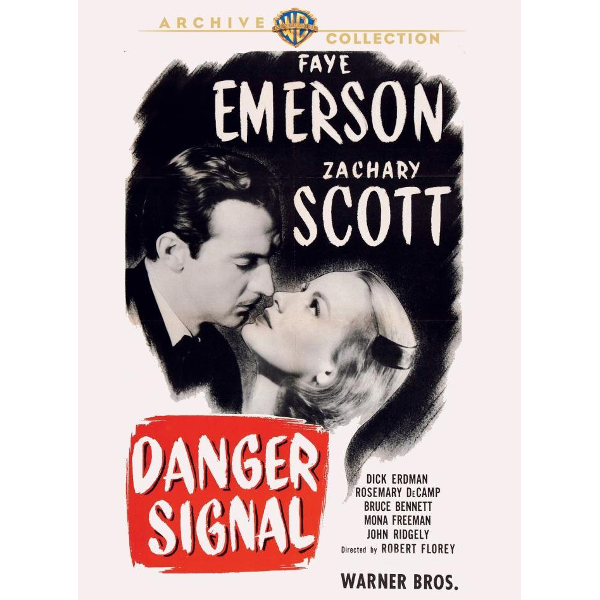 This official tag line, above and on the poster (left) has nothing at all to do with the suspense movie it advertises, Danger Signal. The trailer also tries to turn this tale of a predatory male rat into a show about a killer female. As audiences in 1945 took their cues from coming attractions, Warner’s ad campaign must have made a lot of customers feel cheated. Released just a month or so after the dangerous dame smasheroo Mildred Pierce, WB’s vehicle for second-string studio contractees Faye Emerson and Zachary Scott fits nicely in the first wave of sordid romance/murder noirs to follow the previous year’s taboo breaking trendsetter Double Indemnity. The rather ruthless intrigues begin in much the same way as does the noir classic Fallen Angel, with a con man worming his way into the affections of a working-class beauty. Despite some great visuals and direction by James Wong Howe and Robert Florey, Danger Signal isn’t quite into the noir spirit, but the interesting cast and surprisingly unsavory situations do give much of it an original spin.

The film has a bit of the flavor of Hitchcock’s Shadow of a Doubt in that the hero is a suave Bluebeard killer always prowling for more wealthy prospects to marry. The smooth opening reminds us of Robert DeNiro’s great scene in Kazan’s The Last Tycoon, demonstrating that movies involve an audience not with talk, but with intriguing action. A man (Zachary Scott) recovers a ring from a woman lying on a bed, cleans out her purse and sneaks out the window. The woman is identified as a runaway wife who committed suicide; a note is found with her body. The killer sneaks off to Los Angeles, stealing a ‘wounded veteran’ pin on the way. Identifying himself as Ronnie Mason, the killer takes a room from Mrs. Fenchurch and her daughter Hilda (Mary Servoss & Faye Emerson). Charming and cultured, Ronnie soon worms his way into the hearts of his landladies. He claims to be an ex-serviceman and wants to be a writer, so they forgive his rent. He begins an engagement to Hilda, that he wants to remain secret until one of his stories sells and he can afford to be the man of the house. But Hilda’s teenage sister Anne (Mona Freeman) returns from a convalescent stay and is charmed by Ronnie as well. When Ronnie finds out that Anne will receive a $25,000 trust fund when she marries, his allegiances shift. He has no problem pushing Anne’s teenage boyfriend Bunkie Taylor (Dick Erdman) out of the picture. Hilda discovers Ronnie’s outright lies about his pursuit of Anne, and orders him out of the house. But the arrogant, scheming Ronnie has already convinced Anne that Hilda is the selfish villain. Hilda steals Ronnie’s gun, with murder on her mind. In 1946 both studios and independents were exploiting the gap in the Production Code created by Double Indemnity, but Danger Signal steps across the danger line only to slip back again. The first scene beautifully conveys the noir spirit of cold-blooded murder (a Robert Florey specialty) but the mood is broken by a folksy family feel, plus frequent romantic comedy sidebar events. Stumbling professor Dr. Lang (Bruce Bennett) uses Hilda’s typing service but is too shy to ask her for a date. Hilda’s office pal Kate (Joyce Compton tries to play matchmaker while complaining about her own dating problems. At home, the film can’t decide if sister Anne is a fickle teen cutie, or a budding Borgia — it’s almost as if actress Mona Freeman had been trading notes with Ann Blyth, the star of the concurrently produced Mildred Pierce. Complicating the mood is Anne’s neighborhood boyfriend Bunkie, a comic character seemingly stolen from the loud ‘n’ rowdy Janie comedy movies.

In a way the comedy relief helps make the serial killer theme seem more real, even if the film’s tone never gets dark enough to support some of the extreme noir events of the third act. Ronnie Mason’s MO is to fake suicide notes for his prospective victims, and even gets Hilda to jot one down, ‘for use in one of his stories.’ Another typing customer for Hilda is psychiatrist Dr. Jane Silla (Rosemary DeCamp, with a German accent). When Hilda realizes that Ronnie is a complete lying psychopath, she and Silla team up to expose his game. The lady shrink has already mentioned that ‘all people are capable of murder,’ and sure enough, Hilda becomes so convinced that Ronnie must be stopped that she waits in hiding for him, with a gun. When that fails, she contrives to poison him.

The film’s comic touches don’t support Hilda’s murderous streak, as she just seems too healthy and sane to crack up in that way. Hilda would more likely also confide in Mrs. Fernchurch and perhaps Dr. Lang to combat the threat of Ronnie Mason. Hilda never catches on that Ronnie is more than just a dastardly fortune hunter, which seems a complete waste of an added scare opportunity. Ronnie even admits his evil side to Hilda, claiming that there’s no reasonable ethic beyond self-interest, and that a smart person can get away with anything. Another missed angle is the fact that Ronnie’s stories start to sell. With a little self-control he could have happily murdered women through his writing, instead of in reality.

Of course, the Production Code had not really disappeared at all. A studio might badger the Code office into easing its standards fory a big production, but a little program picture like Danger Signal was likely not worth the effort, or the trade-off. (spoiler) Easing away from the ‘personal traps’ of pure noir, Hilda never becomes morally or legally tainted. She only seems to be going bonkers. The Ronnie dilemma is resolved, as James Mason said so well, “from a great height.” I will say that the film’s finale has either the best cliff stunt I’ve ever seen, or the most realistic human dummy.

Tiny companies like PRC were already finding ways to occasionally slip nihilistic downer endings through the censors, grim finales in which the niceties of moral retribution were being bypassed. By the next year the studios had also have caught on, giving us noirs with disturbingly unresolved finales. Danger Signal was surely hurt by its ending, which is suitable for a musical comedy. (Spoiler) Dr. Lang overcomes his shyness like a Li’l Abner in a lab coat; Anne converts back from a teen fatale to an ordinary bobbysoxer, admiring the goofy Bunkie in his new naval uniform. Even if Robert Florey wasn’t forceful enough to iron out his film’s lumpy tone, his interesting performers bring the show to vivid life. Faye Emerson and Zachary Scott were both positioned for possible stardom in bigger pictures. Faye is marvelously credible as a forthright, no nonsense woman. Her Hilda falls fast in love and just as quickly sours as it dawns on her what kind of lying rat she’s become engaged to. Her demonstration that Ronnie has no copyright on ruthlessness provides as satisfying a payback as we need.

As Zachary Scott was obviously going to be big in Mildred Pierce, Warners let him unleash what would become his most despicable character this side of Edgar Ulmer’s Ruthless. Scott had two smiles. The first looks fresh and honest, and sees careful use in his good-guy roles, as in in Renoir’s The Southerner. The second smile looks positively evil, completely insincere. With his weak chin, he’s the snake in a tuxedo that unaccountably attracts impressionable young women. Just the same, Scott ended up being memorable when playing weak, compromised characters: Flamingo Road by Michael Curtiz, and The Young One by Luis Buñuel.

We wonder if this show might have one of the many properties Joan Crawford turned down at Warners. Its author Phyllis Bottome had also written the book on which the MGM hit The Mortal Storm was based, so Danger Signal might have been considered a desirable property. No, the acting diva preferred to go more completely nuts two years later in Possessed, and commit real murders. Interestingly, Ms. Crawford would much later play a similar but more isolated typist dealing with a different kind of psycho lover in Robert Aldrich’s Autumn Leaves.

The Warner Archive Collection DVD-R of Danger Signal is an okay but not exceptional encoding of a film that ought to look sensational, having been shot by James Wong Howe. The copy I got also seems to have an encoding glitch. The horizontal line stability is off a bit, and in some scenes, the video field progression seems broken, as if fields were missing or repeated. I checked this on two separate disc players. Could the show have been converted from a PAL master? It doesn’t look very new.

The stars look attractive just the same, especially in close-up. The one extra is the original trailer described above. It indeed seriously misrepresents the film’s content, making it look as if Faye Emerson’s virtuous Hilda is the out-of control killer.