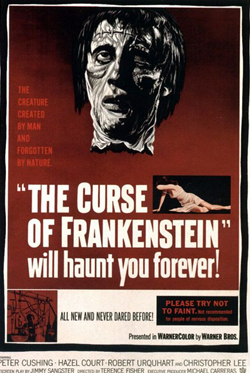 The Curse of Frankenstein

The international sleeper hit of 1957. Terence Fisher’s then-gorily shocking re-imagining of Mary Shelley’s novel jump-started Hammer Films into becoming the major supplier of genre fare for the next decade–and introduced Peter Cushing as the definitive Dr. Frankenstein as well as Christopher Lee in his first monster role. Followed by six sequels.