A classy crime thriller, with edgy suspense and twists that can’t be predicted.  Mike Hodges directs Paul Mayersberg’s script about a frustrated writer who returns to casino work to find material for a book.  A young Clive Owen shines as the rakish but sensible roulette & blackjack dealer, who documents his own criminal activities. 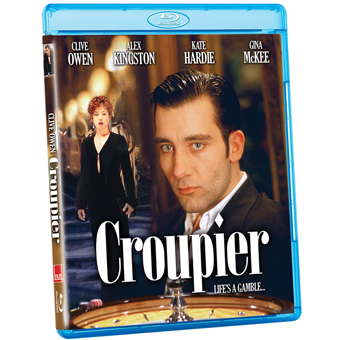 He: “You’re my conscience.”

She: “Don’t you have a conscience of your own?”

If anybody tells you that the British ceased making good crime movies in the 1970s, don’t believe them. From Villain and Get Carter forward, they haven’t stopped turning out smart, sharp and sexy crime fare that embraces good old noir ethics: sordid doings, people devoid of scruples, and a ruthless attitude toward the use of sex. In some ways these pictures are more cynical/virtuous than most of the old American classic noirs, whose bitter underpinnings were usually compromised by the PCA, the Production Code Administration. 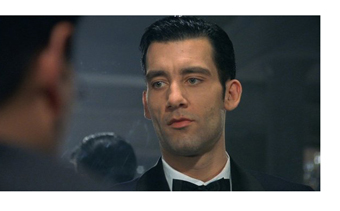 1998’s Croupier is a superior thriller that can boast compellingly corrupt set of characters, a wholly convincing casino setting, and something that few movies of its kind can muster these days — real unpredictability. It’s directed with style by Mike Hodges, of Get Carter fame.

Clive Owen (Inside Man, Children of Men, Duplicity, The Knick) is a writer unable to find the right subject until he resumes his occupation manning the gaming tables in a swank London casino. His adventures lead him to three different women and various opportunities for crime. How he handles the temptation makes for sharp, suspenseful entertainment.

Blocked in his writing, Jack Manfred (Clive Owen) goes back to his tuxedoed life running roulette wheels and blackjack tables at a fancy London club with very strict security rules — that the other croupiers routinely break. His girl friend Marion Nell (Gina McKee) works in department story security. She would rather see him stick with the writing, but the decent salary beckons. Thanks to his experience on the gaming floor taught by his gambler father (Nicholas Ball) back home in South Africa, Jack excels as a croupier, impressing everyone at the casino. The other employees flaunt the fraternization and cheating rules. Jack is tempted by a female croupier named Bella (Kate Hardie), and their dalliance does no good for his home life. But a smart customer named Jani de Villiers (Alex Kingston) comes on the scene, bringing with her a daring criminal scheme. Jack is soon back to writing again, turning these adventures into good fiction. Even Marion can tell that the crook hero in Jack’s novel is Jack himself; he’s practically reporting his own adventure as it plays out. Will he go through with the caper, as the inside man for a group of thieves he’s never met? 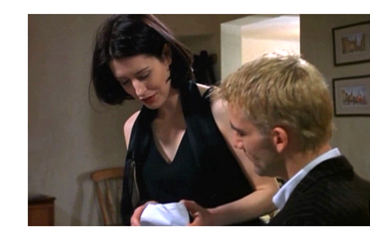 A favorite older crime thriller about an inside man was 1978’s The Silent Partner with Elliot Gould and Christopher Plummer. Croupier combines that film’s excitement with a hardboiled surface of its own, courtesy of Paul Mayersberg’s fine screenplay. Jack Manfred’s voiceover communicates his thoughts, commenting dryly on what’s going on around him, in fine Jim Thompson fashion. He invents stories about people, just to keep in practice for his writing. Jack prides himself on following the rules. We know he’s putting up a slick front, and compares croupier fraternization to incest. The story develops naturally and every plot turn and incident is something we haven’t seen very often, if at all. The show really holds one’s attention.

Our hero Jack is quiet and unresponsive to most provocations. His motto for jobs and relationships is, “Hang on tightly, let go lightly.” He does his best to hide his feelings, as would a poker player. And he’s no saint. Fellow croupier Matt (Paul Reynolds) flaunts all the rules, and is constantly tempting our hero. Jack feels no remorse whatsoever informing on Matt to the casino management. A pristine image keeps anyone from suspecting Jack, and that’s just the way he likes it. He’s so independent that he puts his novel about a crooked croupier into print anonymously, bypassing his somewhat patronizing publishing agent. We see the agent at a bookstore signing, where he’s pushing an author who’s an admitted terrorist, with a ‘kill and tell’ book.

Unlike his girlfriend Marion (who has a slight cockney accent?), Jack can put forward an impeccable posh front, especially at the gaming table. He also looks terrific in a tuxedo, takes great pride in his work, and likes having a feeling of control over his world. He does not himself gamble, as he despises the gambling world in which everyone seems to lose. He senses, but doesn’t quite realize that his detachment from his environment will make getting involved in a robbery scheme all too easy. For instance, the crooks that buy his services pay him up front. That allows him to rationalize the crime by saying that he’s doing a job, not gambling. For a man who doesn’t gamble, Jack figures the odds on almost everything he does. 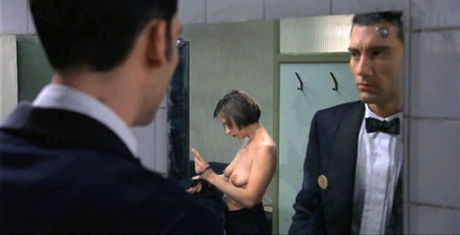 The atmosphere around the Casino is excellent, more compelling than most films that think gambling is all about looking good, smoking and accepting drinks from the house. The job of croupier is examined as a workaday occupation with rewards and disadvantages. Jack’s new boss is an interesting fellow easily swayed by good manners and slick work with the cards and chips. We respect Jack’s yearning for independent control, away from bosses, corruption and false friends. He’s not a sociopath, like the first-person narrators in the Jim Thompson books.

The picture features three fascinating actresses. Gina McKee’s Marion is realistically demanding and nurturing, and understandably vexed by Jack’s lack of emotion. The movie is realistic about their relationship. Marion doesn’t leave Jack when she catches him cheating, but she does go out with an old flame of her own, a detective. Jack has no jealous reaction to this, even though he loves Marion. For her to meet the other man for a dinner makes perfect sense to him. McKee principled Marion seems to know that going back to the gaming tables is not a good idea for Jack. The film’s tension doubles when she discovers Jack’s secret cache of money, hidden under the kitchen sink. 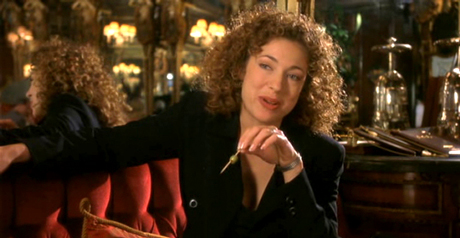 Jack is immediately attracted to his co-worker, Bella. She first tempts him into breaking the staff fraternization rule and eventually blames him when somebody turns her in for cheating. Kate Hardie goes for Jack Hard and fast, and only slowly realizes that he hasn’t turned her in (‘shopped her’). He likes her more than she knows.

Alex Kingston’s cautious gambler Jani is a cool customer, with a sense of self-possession that Jack admires. She’s a gambler (or “punter”) who knows just which buttons to push to motivate Jack to do her bidding. He catches her faking bruises and a black eye, to elicit his sympathy. To earn a great deal of money, half of it to be paid up front, all he must do is to help facilitate a distraction in the casino, at just the right time. When Jack falls in with her robbery scheme it’s as if he’s doing so to be able to write about it for his book. He knows he’s being fooled but doesn’t care. He spends none of the money, with the idea that something will go wrong and the thieves will demand it back. He also plans not to touch it for two full years: one of the thieves might come back to demand part of it. Surrendering it will be much better than getting shot or knifed.

I didn’t remember Clive Owen from the previous year’s Bent, where he plays one of a pair of gay men placed in a labor camp by the Nazis. Owen was briefly considered a possibility to play a new James Bond, but he projects a vulnerability that makes him better suited to comedies, and thrillers where the hero isn’t supposed to be bulletproof. We keep wondering if his Jack is going to fold up emotionally. Instead, he emerges as the kind of man who insulates his emotions against harm. Jack gets a full introduction showing off his skill with cards, chips and the roulette wheel, all the while being gracious but firm with the demanding casino customers. Owen can handle the cards with ease; the camera doesn’t cut away to some professional performing the slick shuffling and dealing.

The movie has more than its share of clever writing. Jani asks if Jack believes in astrology, and he says, “No, I’m a Gemini, and Gemini’s don’t believe in Astrology.” The smart dialogue and clever plotting are in service of the characterizations. Director Mike Hodges has things in control — the crime doesn’t become an excuse for excess violence or a Major Dramatic Statement. Croupier evokes the kind of thriller pleasures normally found in the best hardboiled fiction. 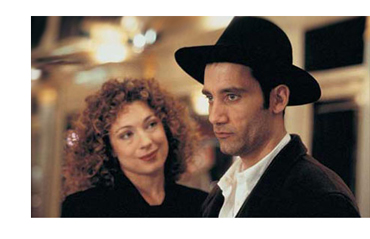 Hen’s Tooth Video’s Blu-ray of Croupier is a much-awaited HD presentation of this attractive thriller set in a fancy Casino. An old DVD from Image and Shooting Gallery was marred by an indifferent, non-enhanced transfer. Hen’s Tooth’s new Blu-ray carries a well-tuned transfer that brings out the picture’s excellent visuals. Some of the lighting looks greenish in the beginning, but I believe it’s meant to reflect the quality of light in the casino locker room, etc. Unlike most other English crime pix, this one takes place in posh surroundings and isn’t packed with thick regional accents. The disc has English subtitles, but they’re not really needed.

Croupier did leave me with a couple of questions. A woman is killed in the course of the movie, and I’m not sure why Jack isn’t concerned that the thieves working with Jani might be responsible. I’m also not sure of the story’s time period. Jack’s sports car is an old model, but it’s very beat-up. He writes on a typewriter with a computer memory, that I remember being popular in the early 1980s before PCs took over. But Jack prints out something on what looks like a laser printer. I’m still impressed by several very amusing story surprises in Croupier. It’s a whip-smart crime tale, one to add to the shelf of special winners in that category.