Let loose some airy English film aesthetes with a big budget, a French film studio and a theme somewhere between Marcel Proust and Jean Cocteau, and back comes this strange, slightly off-balance but extremely impressive objet d’art. Eric Portman is really good, Edana Romney not so much. English actresses Barbara Mullen and Joan Maude compensate greatly — they’re haunting, actually. For his first job of direction Terence Young gives us a flash of Christopher Lee in his first film, along with pretty Lois Maxwell. Content-wise the film has the screwiest construction … its style and obsessions are split between the two films presently rated the best ever made!  Expect something different: the baroque style may prompt some viewers to reach for the ‘eject’ button. 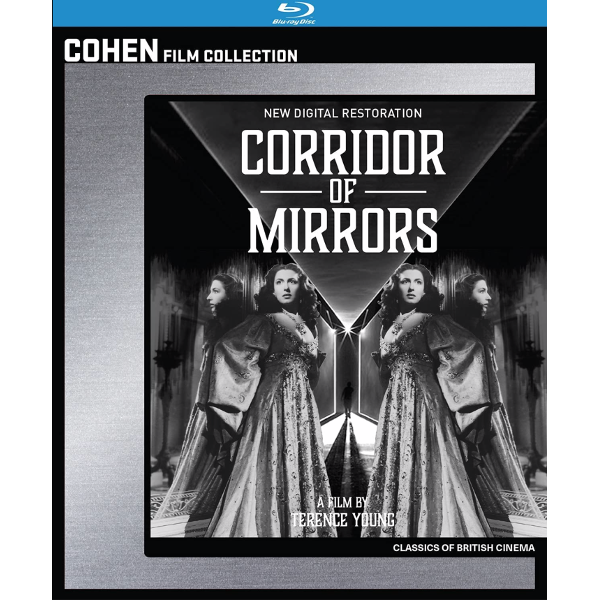 Well, here’s something I’ve wanted to see for years. As early as 1970 I ran into people who remembered Corridor of Mirrors from when it came out and were dying to see it again. They warned me that I might not like it because it was visually fussy and constantly making delicate, poetic effects. Since I can appreciate Cocteau’s Beauty and the Beast as much of the next person, that wasn’t a deterrent. Back when I thought Andrew Sarris was the last word in film criticism, his comment on Corridor of Mirrors was a backhanded approval-cum-dismissal: “curiously memorable, baroque and unoriginal.”

I didn’t know what to expect going in. The cast meant very little to me, although many horror fans will remember reading that this is Christopher Lee’s first movie appearance. Any Georges Auric music score is promising. Producer- co-writer Rudolph Cartier also produced the three Quatermass TV shows at the BBC. The reason some of the top credits are French, is that Cartier filmed this English movie at a studio in Paris.

The show is the first official directing effort of Terence Young. He signed the first, second and fourth official James Bond films and the great Wait Until Dark, and also quite a lot of commercial junk. I don’t think that Young did anything quite like this ever again. At first the visuals seem overly self-conscious, as happens in parts of the high-toned literary mystery The Queen of Spades. We could be watching some French masterpiece of the 1940s, with highly tasteful, ornate camerawork.

Get ready for a review without spoilers; I’m sure a full synopsis is available online if you want to have this experienced ruined. I kept expecting a supernatural element to come to the forefront, as the plot certainly sets up that possibility. Here’s a brief rundown of certain elements we encounter: 1) a potentially romantic extramarital rendezvous with someone who is supposed to be dead; 2) a wealthy man able to indulge an incredibly expensive reincarnation fantasy related to a lost woman in the past; 3) the expected oneiric portrait, hundreds of years old, that matches a woman living now; 4) a terrible jealousy that results in a death that involves a strange substitution of female figures.

The first thing that hits us is that every other shot seems specifically designed to ‘not look like anyone else’s movie.’ Terence Young and cameraman André Thompson seldom repeat an angle. Unusual trucking shots and slightly tilted angles abound. The blocking is strange; in a nightclub we’re never quite sure what the layout is, beyond the position of a dramatic staircase. We are also seldom able to figure out exactly where we are in the hero’s enormous London town house. An entranceway hall ceiling looks to be 30 feet tall. The titular corridor of mirrors could be an access gallery in an opera house, but with a mirrored door every ten feet. The overall effect is dreamlike, with this vast house with (apparently) no servants and one live-in guest that the heroine only discovers by accident.

The ‘hero’ Paul Mangin is a very wealthy actor with bizarre tastes. He collects antiquities from a certain period, and commissions a dressmaker (Alan Wheatley) to recreate designs he’s seen in paintings. They’re all for a non-existent woman, that he nevertheless believes he’ll encounter one day. He doesn’t have friends, only associates and sycophants. He doesn’t need them, because he’s independent and committed to his artistic obsession. In movies, characters like Mangin are usually psychos, that eventually menace the heroine. But the story goes in a different direction.

Three very distinct women revolve around this mysterious, apparently highly attractive man. One is something of an adventuress made curious by Paul Mangin’s magic cache of clothing and priceless museum-piece jewelry. The other two are older acquaintances, one troublemaker who never made the grade, and another with a slender hold on sanity. At a certain point the adventuress decides that Paul may not be telling her the truth, as his words don’t jibe with stories told by the others.

The star Eric Portman is really good here. I’ve only seen him in a few featured supporting parts, usually twisted characters like the killer in Wanted for Murder. Powell and Pressburger used his cold, remote quality to play a Nazi, and a weird English gentleman who throws glue in women’s hair. What’s special about Portman here is that we like Paul Mangin — he’s after some thrill or experience nobody else can fully understand. Mangin is haughty, obsessed, and manipulative, but he’s also following an overarching romantic obession, that looks like it might work itself out. The problem is that even if Paul can recreate his lover from the past, she will probably reject him as she did in the ‘earlier life.’ Mangin has amour-fou romantic doom written all over his cultured face.

Two of the actresses are sensational. Each is actually very beautiful, but their personalities makes them less so. Joan Maude (↑ left)  played the ethereal reception room chief in the B&W heaven scenes of the Archers’ A Matter of Life and Death. Her very different character here is convinced that Paul ought to be hers. Although he tells her to her face that she’s vulgar, she reads his insults as perverse encouragement. She’s part of Paul Mangin’s hanger-on crowd that he mostly ignores — performers, theatergoers and general party people. Christopher Lee, Lois Maxwell and Mavis Villiers are part of this bunch; they each are given maybe 1.5 lines of dialogue to speak.

Barbara Mullen (↑ right)   plays the second woman, whose character is better left unexplained; for a while she seems interchangeable with a conspicuous white cat. As in a ghost story we fear that she ‘might not really be there.’ Adding to our suspicions of something supernatural afoot is the often brilliant Georges Auric music score, which frequently hits notes that remind us of his unnerving compositions for the classic Dead of Night. 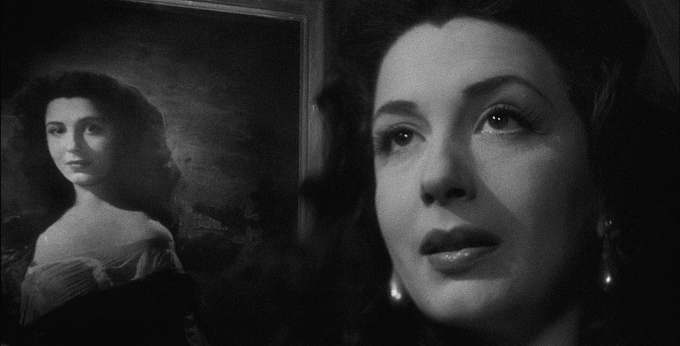 Is there a weak link in the cast?  Most movies of this kind revolve around a star actress, whose beauty informs the mystery and the supernatural magic, if any: Ava Gardner, Gene Tierney, even Ann Blyth. The beauty here is one Edana Romney, who is lovely but not drop-dead-gorgeous lovely. She doesn’t project sex appeal and her eyes hold no special promise. And unlike other more pliable ‘amour fou’ heroines, she never fully commits to the male obsession on view. She just lets things ‘happen to her’ until she draws the line. Her character is central to the tale; we begin and end with her, yet everything we see draws us to the enigmatic Paul Mangin, even when he’s not on screen. Very much worth noting is that Ms. Romney co-wrote the screenplay, adapted from a book by the author of the source book for William Dieterle’s Love Letters.

The biggest set-piece in Corridor of Mirrors is a party on Paul Mangin’s estate — his town house is attached to an acre of classical marble and statuary, with a pond capable of floating gondolas. We’re back in the time of the Borgias again, for a bash more grandiose that the one in Orson Welles’ Mr. Arkadin. Paul Mangin’s somewhat Byronic character might appeal to Welles; he’s a cultivated dreamer who doesn’t mind bending others to his dreams. The difference here is that in the last scenes Paul becomes more sympathetic, and then very sympathetic when it’s too late for anyone to help him. 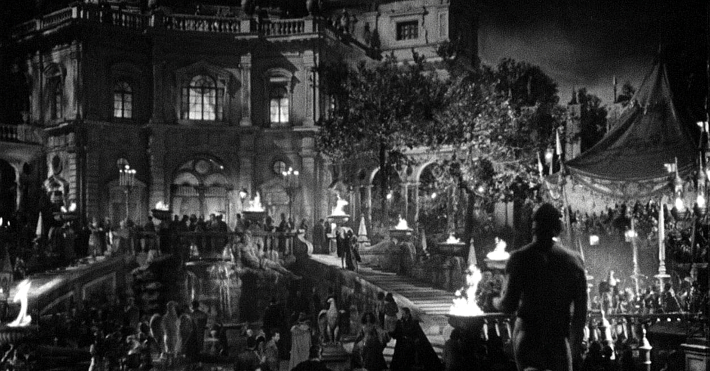 That’s about as far as I can go, except to make one more statement about an observation that came as a real surprise: I can’t help but think that Alfred Hitchcock was really taken by this movie, and may have identified with the Paul Mangin character’s unfulfilled romantic ambitions. If you took the constituent parts of Corridors of Blood: shots, scenes, situations, themes, relationships — and tossed them in the air so that they came down in a different, equally absurd-brilliant pattern, you could come up with Hitchcock’s Vertigo. Mangin is split between Scotty Ferguson and the aloof, God-gaming Gavin Elster character. It’s all there, even a killing that kills the wrong woman.

I’ve already possibly said too much, and have likely over-sold Corridor of Mirrors. Beware, this is another oddball picture that just ‘clicked’ with me. The few bits of coverage I’ve seen online praise aspects of it, but also think it’s muddled, even slack. For me, I think a second viewing is likely to reveal even more in it … it’s a densely organized romantic mystery. It’s a movie for mystery lovers and romantics that don’t require conventional logic at all times. It’s not at all the surreal experience of Peter Ibbetson, and its ‘delirious romance’ is mostly between the hero and his own dreams. Paul Mangin has the delusion that he knows what woman in all of history is for him, yet is as blind to human nature as was Kharis in The Mummy… she needs a reason to love you back, fool, besides your own genius. Mangin is true to his nature and a man of honor, but in the long run his discriminating sophistication does him no favors. 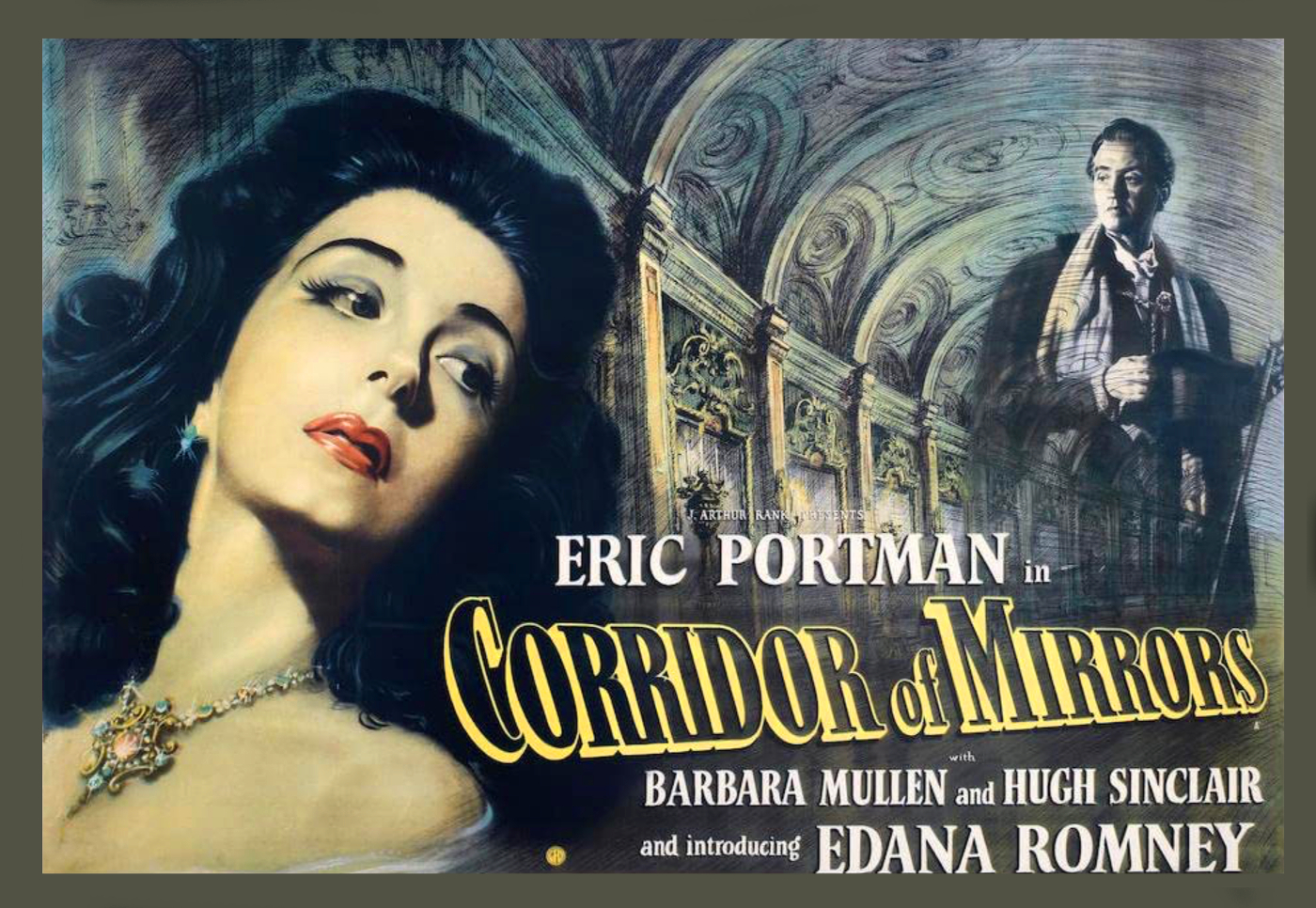 The Cohen Collection’s Blu-ray of Corridor of Mirrors is a handsome disc, with an excellent transfer that allows us to appreciate what must have been one incredibly painstaking job of lighting. Andrew Sarris didn’t describe it as baroque for nothing. As one polished, curated image follows another, we begin to think that it’s more than just pretty pictures. There’s a visual density as in Citizen Kane, expressing Paul Mangin’s heightened sense of aesthetics. Everything communicates well, but I can see where the style — and the somewhat less-than riveting personality of the leading lady — might turn viewers off.

The not-so good news is that the soundtrack is slightly distorted — my uber-technical word for a track like this is ‘crunchy.’ Many prints of U.K. pictures sent to the states had this problem, perhaps because the soundtracks were poor optical dupes. But almost all have been completely ‘fixed’ in digital remasters. If you’ve heard the slightly crunchy soundtrack on all available discs of Dead of Night, even the newest Blu-ray remasters, you know what I mean. We can hear everything okay, but the track is just muddy enough for one to think, ‘gee, I’d like to hear all of this great Georges Auric music a little more clearly.’

Otherwise Cohen’s presentation is a winner. The only extra is a trailer, which turns out to be a new Cohen video promo, not an original.