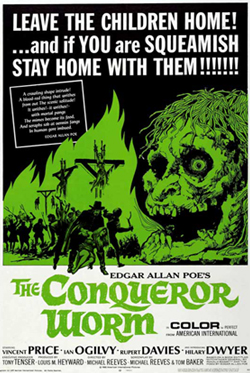 Although it stirred little notice on its US release in 1968, the late Michael Reeves’ final film (of three and a half) has attained deservedly classic status as one of the darkest, most bleak historical treatments of human ignorance and misery on film. Price plays a true historical character, although the real one was much younger. We prefer the faux-Poe US version only for the devastating poem Price reads at the end: “The play is the tragedy, Man. And its hero, The Conqueror Worm.” Get out the sleeping pills!