You never heard of the Great Glasgow Ice Cream Wars? They weren’t exactly Armageddon.  The gentle director Bill Forsyth makes a radio personality’s involvement with two competing ice cream companies more of a plunge into amiable drollery. If you like Gregory’s Girl and Local Hero you’ll understand the odd, unhurried attitude of this oddball show from 1984. 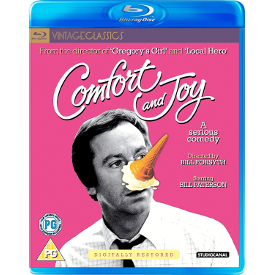 Quick, name some great filmmakers before the 1990s that hail from Scotland. Actually, there are plenty, it’s just that most made their careers and reputations in London, and some later in Hollywood. The home-grown talent Bill Forsyth won the hearts of filmgoers with his droll, endearing teen romance Gregory’s Girl, a Scots film so Scottish that one needs subtitles to understand its English-language dialogue. Instead of going for huge laughs, or going the crime film route that served some of his later countrymen, Forsyth concentrated on a little picture about high school socializing, where the already-wise girls help the boys make up their confused teenaged minds.

Many more fans came Forsyth’s way with the marvelous Local Hero, which managed to mix indigenous culture and whimsy better than anything this side of Alexander Mackendrick’s Tight Little Island back in the Ealing days. International corporate interests target a lovely costal hamlet, but practical, non-aggressive native instincts win over the interlopers and save the day. The show almost verges on the fantastic in its appreciation of nature, and in Jenny Seagrove even has its own version of a mermaid. That’s a picture that needs to be brought back to disc, right away. 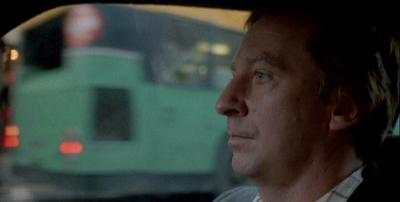 Forsyth’s next movie Comfort and Joy (1984) is looser and less structured, but continues in the same winning style. In Los Angeles those of us who missed it at the theater caught it on the old “Z” cable channel. Remastered for Blu-ray, both its charms and liabilities seem enlarged. If you like the writer-director’s other pictures, you’ll respond favorably to this one too.

This time think ‘low key humor’ and then turn the dial a tiny bit lower. Writer-director Bill Forsyth builds his picture around the easygoing personality of Bill Paterson, an actor noted in supporting roles in The Killing Fields, The Witches and The Adventures of Baron Munchausen. I remember him best from the Ian McKellen Richard III and the original UK miniseries Traffik. 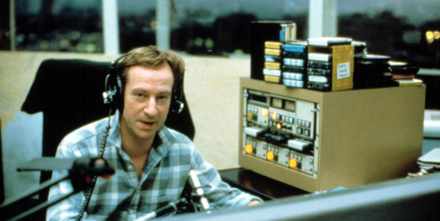 Comfort and Joy could be classified as a crime film, just not in any serious way. It’s set in the Christmas season in Glasgow, where radio personality Alan Bird (Bill Paterson) is locally famous as Dickie Bird, the city’s early morning get up & face the traffic day voice. Alan’s live-in girlfriend Maddy (Eleanor David) is amorous, eccentric and impulsive, and one of her impulses results in Alan being left high and dry just before the holiday. Suddenly, being the public’s light-hearted daily companion for the public seems unfulfilling. To avoid depression, Alan leans for emotional support on a surgeon friend, an old buddy who has a wife and two adorable kids. In his car one night, he chases after Charlotte (C.P. or Clare Grogan), a smiling sales girl in an ice cream truck, and by accident finds the distraction he seeks: a veritable ice cream war being quietly waged on the streets of the ancient city. The few ice cream trucks of the “Mr. Bunny” line run by Charlotte and Trevor (Alex Norton) are being strong-armed by the larger, aggressive, “Mr. McCool” ice cream empire, run by the Italian Mr. McCool (Roberto Bernardi) and his three sons. The fight is over both raw materials and territory. Alan first witnesses the McCool mob seriously thrashing a “Mr. Bunny” truck. He soon throws himself into the job of peacemaker, which results in free ice cream from both sides but also a lot of misleading information. To get the warring parties together, Alan uses the airwaves to send out secret messages, which inadvertently convince his boss that he’s going off his rocker. It’s all part of Alan’s need to forget Maddy, but he also wants to take on a more serious journalistic role in radio. In the meantime, the McCool and Bunny factions are acting like Capone and Bugs Moran, with Alan’s shiny red BMW caught in the middle of their indiscriminate vandalizing. 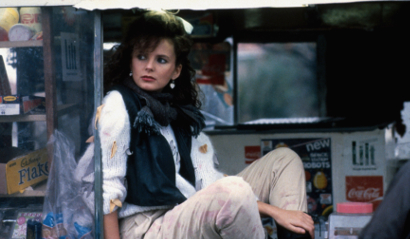 It’s hard to describe the effect Bill Forsyth achieves in Comfort and Joy. For a while you may think that he’s setting up a droll atmosphere to launch into some larger theme, as happens to some degree in Local Hero. No, in this case the eccentric mood and cozy Glasgow nights are what the picture is all about. We’ve got plenty of comedies about somebody caught in a humiliating romantic breakup, but Comfort has no scenes of agonized soul-searching. Alan expresses his misery by saying that he’s a little depressed, not by screaming his lungs out or threatening suicide. Even auto accidents and the aftermath of insane vandalism are accepted without excess theatrics. Forsyth looks instead at the little things, such as the companion-deprived Alan suddenly being envious of every happy couple he sees on the street. He finds himself trying to make eye contact with women, before realizing that they’re obviously attached. Instead of big comedy gags, Forsyth sets these up as simple observations. I counted only two or three major ‘ha ha’ moments in the picture, which I guess is why Universal promoted it with the tag line, “A Serious Comedy.”

The aggravated ice cream rivalry is also not tweaked for big comedy. The situation isn’t all that funny, it’s the strange details that begin to add up:  the weird Mr. Bunny voice recordings made for the trucks, the way the bullying Mr. McCool wants Alan to think that his ice cream is a combination of great art and honorable commerce. We’re told that Glasgow has a sizable Italian population, and both companies turn out to be Italian-owned. An American comedy might spoof the situation, making the combatants seem more like the Mafia. As always, Forsyth keeps things lighter than that. Alan barters a peace and becomes a hero in a rather roundabout way. The finish seems a bit odd, as he swipes somebody else’s invention in the bargain. 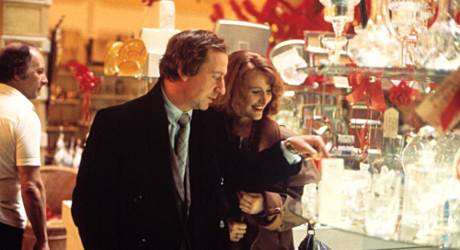 We love the Christmas tone and Forsyth’s amiable characters — the helpers around the radio station that record Alan’s silly commercials, etc..  When Alan spends a night at his friend’s house, all jokes are skipped for a fine appreciation of a family life with little kids. The children seen throughout the picture are charming, as is an elderly radio fan that Alan meets in a hospital ward.  Maddy is introduced in such a way that we think we are in for either a serious crime picture, or a crazier farce. She returns via a cinematic device that’s become a little worn out now, 35 years later, but that accurately expresses Alan’s yearnings. Nothing is predictable. As the show follows no set pattern, we keep fearing that something awful is going to happen to Alan.

Not helping are scenes that work like standard comedy material, and as such are completely unwelcome. Alan’s boss misconstrues his blather about Bunnies and McCool, and a scene with a psychiatrist is really weak; Forsyth fans expect him to do much better with situations like that. But overall the film has enough inspiration to be a winner. Chris Menges made the coast of Scotland look like a fairyland in Local Hero, and his glowing cinematography of Glasgow at night transforms the industrial city into an attractive, happy place of friendly markets and Christmas displays. Mark Knopfler’s amusing music also helps maintain Forsyth’s off-balance tone — it’s the same Mark Knopfler of the band Dire Straits. And Bill Paterson’s ‘Dickie Bird’ is just such a nice guy – we really want him to overcome his problems.

It’s fun to see Alan Bird try to drop his Dickie Bird persona for serious reportage on the city. As soon as he slips into ‘earnest investigator’ mode, he realizes that something isn’t working. He’s much better at his long-winded but thoroughly entertaining Dickie Bird radio patter, saying why he loves Glasgow, making jokes about his co-workers and lying that there’s a big Christmas party in swing at the station, when he’s working alone with a skeleton crew while the married men are at home with their families. Alan Bird isn’t a really a dotty guy, he just plays one on the radio.

I have to say though, that this show is more specialized in appeal than the two other Forsyth pictures I’ve seen. Part of the tension is trying to figure out if something is supposed to be serious or comic, and not every viewer enjoys having to be that involved. Then again, every few minutes an impossibly droll dialogue line just pops up out of nowhere. The one I’m thinking of, spoken after an irate Trevor points to a sign that says ‘Mr. Bunny, formerly Mr. Softy,’ just doesn’t work in print. In the movie, in context, it’s a jolt of unexpected mirth. 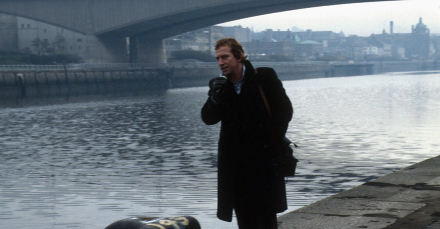 Studiocanal’s Region B Blu-ray of Comfort and Joy is a BFI restoration of this feature from 1984. Don’t be alarmed by the slightly misty, lower quality main titles sequence. It’s an optical that must have given the colorist unexpected trouble. The picture quality improves immediately, with Chris Menges’ shimmering urban-suburban images. I have no idea what Glasgow is really like, but this makes it look very attractive, even welcoming. As I said above, Bill Forsyth fans will find plenty to enjoy in the picture, while some others will not understand the odd tone and relative lack of high-intensity scenes. 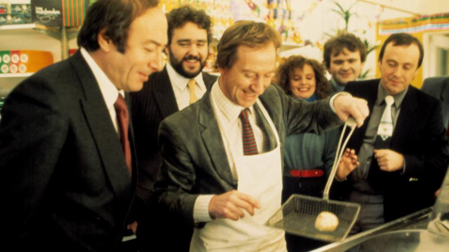 Studiocanal provides three new interviews. Bill Forsyth holds forth for quite a while, explaining how his career began in a Glasgow with no feature film industry, how he had fun working with young people for Gregory’s Girl and all the details about Comfort and Joy. He knew he wanted a breakup-aftermath story but didn’t find the ice cream war angle until one of his actor friends (Peter Capaldi) told him that he came from an ‘ice cream family.’ It turns out that Italian families do run ice cream empires in the cities of Scotland. The events in the film were based on true stories. What Forsyth didn’t know is that some Glasgow ice cream trucks were being used by a syndicate to distribute drugs, which sounds like the perfect cover. When a big scandal hit the year the film came out, Comfort was caught in an editorial crossfire, locally, with the filmmakers blamed for making fun of the situation.

Career interviews also give us actor Bill Paterson, whose only starring role this was, and C.P. Grogan, who talks about her twin achievements in one year, acting in Gregory’s Girl while finding success of the lead singer for a band called Altered Images, under the name Clare Grogan. She later originated a part in the Brit Sci-fi TV series Red Dwarf.

I’ve been waiting thirty years to see Comfort and Joy again. It surely isn’t the laugh riot my memories built it up to be, and is instead its own odd little comic animal, more endearing than hilarious.