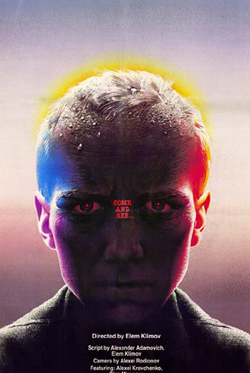 Director Elem Klimov’s powerful, near-surrealistic battle fantasia nearly made it into TFH’s “More Movies You Never Heard Of” category. The title is an invitation to view the destruction caused by the Four Horsemen of the Apocalypse. The movie, from the Soviet Union, is a fixture on many critics’ Ten Best of All Time lists. Its obscurity is hugely out of proportion to its accomplishment. Commissioned to commemorate the 40th anniversary of the Soviet victory in WW II, it’s the glasnost version of Apocalypse Now. The director, having made his point, never made another film.