The director of this unblinking account of the genocide in Belarus in 1942 and 1943 said that “people in America can’t watch my film. They have thrillers but this is something different.” He certainly got that right. A young farm boy is a witness to and victim of horrendous barbarism inflicted on a civilian population… now the most common kind of terror. The Politburo wanted a film to commemorate Victory Day, and director Elem Klimov gave them something nobody would forget. Although cinema gut-wrenchers have gone much further in the last 25 years, Kilmov’s unforgettable horrorshow rivets us through the haunted, paralyzed face of young actor Aleksei Kravchenko, who can scarcely process what he sees. 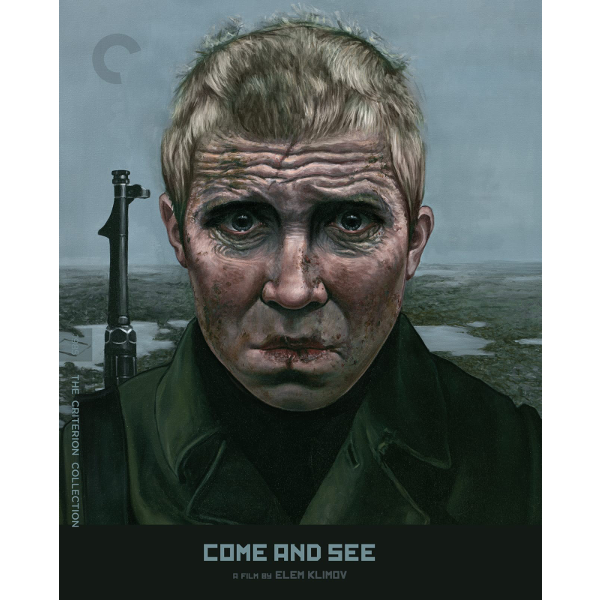 “If I am to treat this film with all gravity, then nobody will want to see this film.”

Soviet director Elem Klimov set out to tell the truth about wartime atrocities that in 1985 were a full forty years in the past. In an interview, his brother German Klimov says that the movie was made from a book so appalling, it was considered by some to be unreadable… this is an unwatchable movie made from a book that was unreadable. There are intolerable things that must seen and understood: the horrible lessons of the past fade quickly because each generation that follows has no contact. We see it all around us with children raised with no awareness of history, not even of what happened five years before they were born: “If it didn’t happen to me, it didn’t happen.” 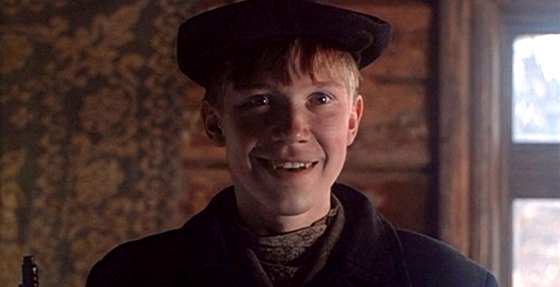 Give any 20th-century war about fifteen years and its immediacy begins to fade. Movies set during the conflict cease being issue-driven vows of resistance and vengeance, as the urge to create feel-good entertainment begins. We Americans are strange in this way: showing strength by not taking things seriously results in TV shows like Hogan’s Heroes. We applaud the outrageousness of Mel Brooks’ movie jokes about Nazis, and an argument can be made that that approach is healthy. America paid a high price in human life in WW2, but the homefront didn’t suffer directly in WW2 — our cities weren’t bombed, we weren’t driven from our homes by armed invaders. In 1975 when Elem Klimov and author began planning a movie to be called “Kill Hitler,” he states that even Russian movies were beginning to lighten up about the war, He thought that Russian movies hadn’t faced up to the reality of the genocide. The older generation that experienced it wished to forget, and the younger generations hadn’t experienced it first-hand. It took Klimov six or seven years to get permission to film his war movie idea, permission that came only when the country needed a commemorative picture for 1985’s 40th anniversary Victory Day.

Most of us first heard about Klimov’s Come and See with words describing it as intensely, intolerably horrifying, so terrible one can’t look at it. When we see the young hero’s mother and two little sisters alone and vulnerable, we dread what atrocities might follow. The show is rough going, a first-person ordeal as strong as any war movie made. Horror fantasies have now become so sadistic that the graphic content of Come and See won’t shock all viewers. But horror is more than an emphasis on gore effects and suffering. What makes audiences profoundly uncomfortable is Klimov’s unrelenting focus on the mental agony and sheer terror experienced by his main character, a thirteen-year-old boy who sustains unthinkable psychic torment without letup, throughout the entire show. 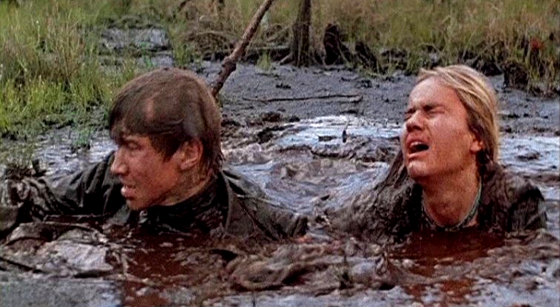 Young farm boy Flyora (Alexei Kravchenko) is happy to find a good rifle in the waste where partisans have been fighting the German invaders; it means he can leave his mother and two sisters and go fight as well. His mother begs him not to go because there will be no man around the house. He soon joins a partisan unit and is filled with spirit, but because of his inexperience they leave him behind on a raid. He becomes enamored of a slightly older girl, Glasha (Olga Mironova). The nightmare begins in earnest when their camp is bombed. Flyora and Glasha flee back to his home. Glasha sees what has become of the villagers but Flyora has not; he’s convinced that they’ve escaped to the swamp. Covered in mud, he rejects Glasha’s bad news. IN the chaos of events Flyora and Glasha separate. For a time he joins a trio of partisans scavenging at the edge of the conflict. But he eventually finds himself in a marsh with hundreds of other starving displaced locals. A forward SS unit sweeps in, and in a drunken orgy of violence herds hundreds of men, women and children, including Flyora, into an old church….

In simply ‘telling the truth’ about the German onslaught into Belarus, Come and See doesn’t impose a dramatic arc on its string of incidents. Flyora’s fate is determined by no rhyme or reason, just random chance and accident. Young Flyora is not dumb but he’s plenty inexperienced. He’s wide open, with his emotions on the surface. He laughs like a child when Glasha dances for him, but very soon his young face becomes that of a terrorized old man. By the end it is a bloodless mass of worry lines around a permanent wide-eyed stare, frozen in a near- permanent rictus of shock. Flyora’s face is the movie. In interviews we’re told that Kravchenko wore different contact lenses to help express extremes of stress, of things seen that can’t be unseen. The effect works — by the end the boy’s eyes seem huge, like those of a staring corpse. He’s alive and breathing but in a state of psychic paralysis. 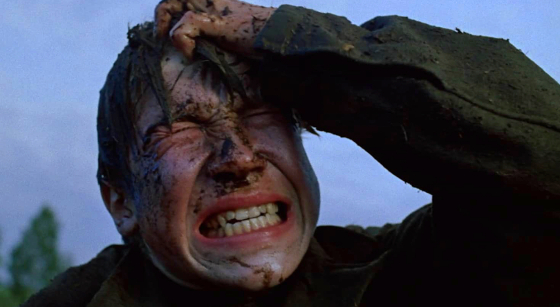 Klimov’s aim is to make the audience feel the full terror of war. We’re told that the director worried that the stress Kravchenko would have to absorb might be psychologically damaging. Would these physical and psychological torments drive the 13-year-old boy going mad?  He had an idea of hypnotizing the actor as some kind of protection (the name of the mysterious psychic Wolf Messing comes up in discussion). But Alexei turned out to be mentally resilient. Flyora was beaten, abused, screamed at and threatened in every scene for nine solid months, out in the elements. More danger was involved than usual — real explosives are used for the bombing scenes and live tracer ammunition turns a night fighting scene into something terrifyingly real.

The color photography has a documentary feel. Unlike last year’s over-praised 1917 nothing in the movie looks pretty or idealized, just real. The forests are beautiful but also dank and cold. Glasha is as pretty as any teenaged girl, but her only dress is an ugly black thing, and her hair is a mess. Come and See shows war as a process of personal degradation. Going through that bog with its floating mud just looks like hell — when Glasha half-submerges her hair comes up filled with slime. The effect must have been intentional, as movie audiences are made just as uncomfortable by real mud and filth than they are fake blood… the concern to be clean is upsetting to our notion of control. Flyora goes through a real hell when the German SS toy with him like a cat with its prey. They toss him around like a rag, and make him pose for photos with a gun to his head. It is like hell. The Japanese made a horror movie directly about hell that overflows gory and perverse tortures and mutilations. But it’s just a photogenic fantasy. Come and See feels real. 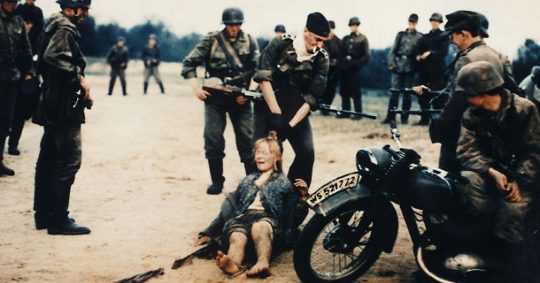 We’ve all seen a little or a lot of war horror atrocity footage, much of it filmed by the war criminals themselves. Come and See does not seek to emulate that footage; I don’t remember shots of mangled or burned corpses. But we can’t forget a scene of Flyora in extreme distress, so anguished that the tries to kill himself by sticking his head into a boggy mush. Actually, fate (or Klimov) spares us and Flyora the worst psychic trauma. He runs out of his empty house so quickly that he never personally sees what has happened to his family and the neighbors. Glasha does, but only for a second… and runs as well.

Actor Alexei Kravchenko says that the one time he panicked was when he was jammed into that church with hundreds of screaming extras. He described his connection to the genocide as ‘genetic memory.’ The author Adamovich primed the scene’s extras by reading to them from one of his explicit memoirs of the invasion: German troops methodically destroyed over six hundred Slavic villages, burning thousands to death in a campaign of pure terror. In a promotional film for Come and See Kravchenko is asked, “Why do you think the film was made? He answers: “So there would be no more wars.”

Klimov’s answer to that comes at the finish, which I won’t spoil. A sudden stylistic gear-shift throws the film into a reverse-apocalyptic montage worthy of Kuleshov or Pudovkin, that manages to express some of the author’s intention not just to kill Hitler, but to kill the Hitler demon inside of each of us.

The Criterion Collection’s Blu-ray of Come and See is a new Mosfilm 2K digital restoration. The riveting cinematography matches Klimov’s unblinking, in-your-face method: his subjects often directly face the camera — us — hiding nothing. The squarish Academy aspect frame allows an even greater focus on Flyora’s tormented face. The film does have beautiful moments, and not just in the forest play between the blossoming sweethearts. Many scenes are shot in near-twilight darkness, yet are sharp and detailed. Static shots soon give away to brilliant, understated SteadiCam shots that put us in the action and make us feel than anything could happen.

The bomb blasts are different than those in Hollywood films — when a hit strikes the woods, trees are blown down. Real explosives are used. Those actual tracer bullets flying over the actors’ heads are terrifying, staccato blasts of red sparks. Klimov’s cameraman must have had guns wired to sync with his camera’s shutter — each muzzle blast is a little inferno. 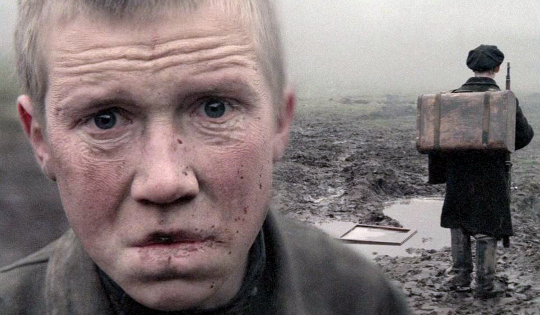 Disc producer Jason Altman’s extras de-mystify the legend of Come and See. Interviews with the director, star and the production designer from 2001 present two serious artists and a young man who rose to a difficult challenge. German Klimov contributes a new, quite moving tribute to his artist brother, who just couldn’t make himself direct another movie after this one. Cameraman Roger Deakins lavishes praise on the way the film looks. Also good is a 1985 promo with some behind-the-scenes shots showing Klimov directing.

Educational but disturbing are three short Soviet films made from interviews with survivors of the Belarus genocide in 1942-’43. Several elderly men and women describe the horrors of their survival while their families and neighbors were slaughtered around them. Some were spared by chance, and one man simply admits that he abandoned his family when an opportunity arose. The main woman interviewee was shot, injured by shrapnel and severely burned on her arms and hands. She was pregnant and down with typhus at the time, yet dragged her badly wounded husband to the next village, on a sled. It’s harrowing stuff. The final woman is a wrinkled old grandmother who could be a poster model for Russian sweetness. She describes losing her husband, surviving and being slow to accept a new man. When she proudly speaks of starting a new family and raising six children, she smiles in a way that elicits tears.