Randolph Scott’s final ‘Ranown’ western is a minimalist masterpiece, an unusually gentle story about a great westerner on a forlorn romantic quest. It’s also a showcase for the underrated Nancy Gates and Claude Akins, and a pleasure to watch in wide, wide CinemaScope. 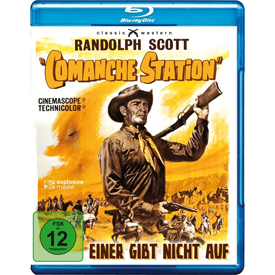 One must be careful when ordering Blu-ray discs of Hollywood films from overseas. Foreign distributors license American movies that the studios won’t release here, but sometimes they don’t have access to good video masters. In a few cases the films being offered are simply being pirated. Western fans will gravitate toward Explosive Media’s releases for their consistent quality. A few years back Sony released a box set of Randolph Scott-Budd Boetticher westerns but only on DVD. Explosive’s Blu-ray of Comanche Station is a beautiful stand-alone HD encoding, authorized and authentic.

Randolph Scott may have been the busiest western star of the 1950s. Even as he got older his noble countenance and straight-shooting manners endeared him to audiences. Non-political and possessed of an unbreakable integrity, the Scott hero could be counted on for eighty minutes of uncomplicated western conflict. When showing his age in the second half of the decade, Scott embarked on a series of compact western dramas co-produced with Harry Joe Brown. They do without big-studio production values, yet are epic in feel — cameramen like William Clothier and Charles Lawton Jr. knew how to make a shot of three or four riders beneath a big sky look suitably gigantic. Writer Burt Kennedy and director Budd Boetticher lent the films what critic Andrew Sarris described as the intimate dynamics of a floating poker game: in each picture Scott’s protagonist found himself at odds with an equally shrewd villain. As we compare the motives and backgrounds of each man, we discover that the Scott character’s heroism is caught up in contradictory impulses, while the ostensible villain has good qualities, including a likeable personality. The bad guy is capable of good acts, but in the end is the victim of his own greed. The series presented us with a fine selection of villains: Lee Marvin, Richard Boone, Pernell Roberts, and in this last tale, Claude Akins. (The first western in the unofficial series, Seven Men from Now is actually a Batjac Production without Harry Joe Brown as producer.)

Comanche Station is the last and most wistful of the films. Like a ghost of the desert, Jefferson Cody (Scott) has searched ten years for his wife kidnapped by the Indians. In a hard bargain, he buys a white captive sight unseen. He gets not his wife but Mrs. Lowe (Nancy Gates). Cody has heard that a woman by that name has gone missing fairly recently, but is unaware that a sizeable reward has been posted by her husband, who is not himself searching for her. Cody and Mrs. Lowe are soon joined by outlaw Ben Lane (Claude Akins) and his sidekicks Frank and Dobie (Richard Rust & Skip Homeier). Cody distrusts them from the first, and suspects that they are Indian-killing Scalphunters, whose depredations are precipitating the reprisals against innocent stagecoach travelers, etc. The colorful Ben Lane jokes and teases, but the bottom line is that he wants the reward for Mrs. Lowe’s return, and is willing to kill for it. Mrs. Lowe wrongly assumes that Cody had a mercenary motive in her rescue, while both Cody and Lane wonder what kind of unworthy husband would hire others to bring back a beautiful wife like Mrs. Lowe. Cody refuses to explain or justify his actions to either Mrs. Lowe or their unwelcome fellow travelers. If he wishes that Mrs. Lowe might end his own loneliness, he doesn’t let on. 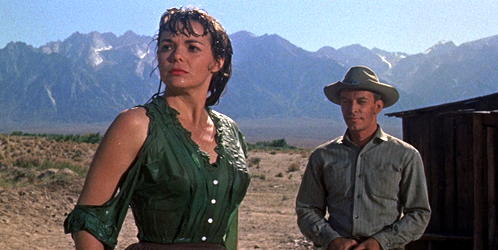 The previous Ranown westerns gave the Scott character a variety of motivations, from simple survival to bitter vengeance. There’s always a woman to admire him from afar, and the producers were wise to choose actresses of great appeal. Most were too young for Scott, in terms of conventional romance: Gail Russell, Maureen O’Sullivan and Nancy Gates are all married, but seemingly to unworthy mates. This makes the Scott character’s solitary situation all the more pronounced. In the four Scott-Kennedy films, the nobility of the Scott character isn’t taken for granted. His fellow players question his honesty and integrity, as if challenging his poker hand. The Scott character refuses to show his cards or make defensive pleas. When it turns out that his nobility is  not a bluff, he earns his moral superiority. No wonder that even Mel Brooks found nothing to criticize about Randolph Scott — a joke in the irreverent Blazing Saddles is really nothing more than an acknowledgement that Scott is simply THE BEST.

In Comanche Station Scott’s Jefferson Cody is not introduced wearing a halo: when negotiating with the Comanche for a kidnapped white woman, he trades a rifle for her, normally a western no-no. Mrs. Lowe is initially thrown by Cody’s seeming lack of solicitude, and becomes scornful when she believes that he rescued her for profit. Cody believes in actions, not words. He doesn’t try to get Mrs. Lowe on his side, and he doesn’t defend himself when she chastises him. He’s above such reactions but also beyond them. He knows that life is too short to spend one’s time trying to do public relations work for one’s reputation. Good folks will figure it out, and the bad ones can’t be persuaded anyway. By staying true to his quest and never asking for sympathy, Cody earns the admiration of friend and foe alike.

The strongest undercurrent in Comanche Station is a sad romance that cannot be. When Mrs. Lowe learns that Cody is on a quest for a wife he most likely will never find, an attraction forms between them. Romance was more natural in The Tall T, with Maureen O’Sullivan seemingly closer to the age of the Scott character. Cody cannot abandon his lost wife without cancelling out his identity. If you love the woman, you must commit to finding her even beyond all likelihood of success. Yet we can tell that he’d like his quest to be over, to allow him to be with a woman like Mrs. Lowe. For a guy who doesn’t parlay with fancy love talk, Jefferson Cody is an intensely romantic figure. 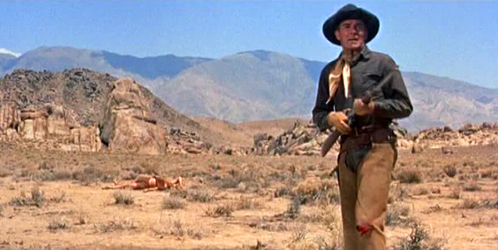 Ben Lane’s folksy bad guy is surely actor Claude Akins’ finest film role. A knave, liar and murderer, Ben Lane just happens to be innocent of the crime of Scalphunting — at least this time. But just as the dialogue alludes to the fact that Mrs. Lowe has suffered rape at the hands of her captors, we learn that Scalphunting is basically genocidal murder, the killing of men, women and children to earn a per capita bounty. Ben Lane is not a psycho villain like Richard Boone, but he definitely doesn’t work with the same moral compass as Cody. Killing is just what one must do in order to survive. Having to kill both Cody and Mrs. Lowe to collect the reward is regrettable, but Lane is pleased that the reward is payable even if Mrs. Lowe is dead.

Skip Homeier returns for a second time as a Ranown second-string baddie. He and young Richard Rust are quite likeable as Lane’s green and not-so-green henchmen. Both begin to show an inability to kill Mrs. Lowe, and we fully expect that some sort of rebellion is brewing. But the story goes in a different direction.

The surprise ending really shouldn’t be a surprise, but I have to admit that I was taken unawares the first time I saw it. Perhaps we respond that way because Comanche Station is so straightforward. It’s a gentle twist, and it provides no ‘easy out’ for the leading characters. Mrs. Lowe knows that she’s made an emotional connection with a man that will never forget her. To the refrain of the film’s sad main theme, Jefferson Cody rides off, blending with the landscape as if disappearing into legend. Out there in the twilight, old Cody is still searching.

Comanche Station utilizes almost all the same locations as the previous Ranown movie Ride Lonesome, which leads me to believe that the canny producers filmed both of them back to back to save money, and then allowed Columbia to release them a year apart. Oddly, Comanche Station seems to end in the same place that it started, among the rocks of Lone Pine’s Alabama Hills. Even more oddly, the climactic hanging tree seen in Ride Lonesome returns for one shot, in the middle of a flooded area. Could it really be in the same place, but at a different time of year?   It’s very likely a manufactured prop, however. I’d make a case for the tree having a thematic meaning, except that there’s no way that the Ranown partners would concern themselves that future viewers might line all these pictures up to examine them more closely. I hope that Explosive Media accesses more great Columbia westerns from Sony.

Explosive Media’s Blu-ray of Comanche Station is a gorgeous encoding that’s essentially the same as Sony’s DVD from 2008, with the expected improved image. Charles Lawton Jr’s. CinemaScope images are clean and bright, and almost free of typical distortion — these are either the improved lenses or the camera assistants actually knew how to properly adjust the lens to get a flat field. As it is, Budd Boetticher’s camera style is sparing with close-ups. I see no instances of C’Scope mumps. Unlike some earlier video incarnations, film grain is not excessive, and the joins with most of the optical sections for dissolves are well matched. Comanche Station has survived the years in good shape.

The film has German and English tracks and subtitles, which will make older fans happy. As the German track is the default, prepare to go into the menu to select the English option. Although listed on all documentation as Region B, the disc plays in Region A players as well. The titles on the film are all in standard English. I don’t know the translation for the German title Einer Gibt Nicht Auf. Babylon gave me “There Is Not On.” Not very catchy, you’ll agree. (Help from friends, 9.14.16: the translation is “One Doesn’t Give Up.”)

The interesting exclusive extra is a lengthy videotaped interview with Budd Boetticher, taken during a Q&A session at a screening session. Boetticher eagerly tells his tales of Hollywood, and we hear plenty of interesting (and opinionated) stories about people like Karen Steele, Julia Adams and Ray Danton. He spins a few anecdotes out a bit long, but this is a man worth listening to. Boetticher man ran away from home and broke into the highly insular Mexican bullfighting society. He was married five times, one of them to Debra Paget (swoon). His stories stay civil, maybe because his last wife of thirty years Mary Chelde is seated behind him on the Q&A panel.