Norman Lear’s Cold Turkey is preferred by 4 out of 5 doctors, and the other doctor is a fool that doesn’t smoke cigarettes. Lear’s triple-threat writing, producing and directing effort is by no means a lazy comedy, with its twenty featured actors dashing around like asylum inmates for ninety minutes. It’s not the show to help one kick the habit, that’s for sure — even though it makes smoking look appropriately disgusting. According to the IMDB a dozen features and shorts called ‘Cold Turkey’ have been made since 1971, but for filter’s sake accept no substitutes, because it’s what’s up front that counts.

Norman Lear began writing for TV comedy and variety shows in the early 1950s, and when he broke out into features as a writer-producer hyphenate his liberal conscience appeared, a little at first and then a lot. Divorce American Style had a rather dark approach to its subject, and the same streak of cynicism shone through Lear’s essentially sentimental The Night They Raided Minsky’s. Lear was also collecting a group of favorite actors that would see him through decades of hit TV shows to come, beginning with 1972’s mega-hit All in the Family.

Lear tried writing, producing AND directing in his Cold Turkey, a scattershot comedy with a large cast and a topical theme. Getting a huge media push from United Artists in 1971, it feels like an attempt to lure middle-aged audiences back into theaters, the ones scared away by the Easy Rider revolution. This show is somewhat more adult than one would expect for a film rated PG, simply because its few sex jokes are so on-the-nose. Then again, Lear’s approach is bolder than the garden-variety American comedy of the time. Lear sees his average Americans as clowns, fakes, predators and saps unaware that they’re neurotic obsessives at the mercy of screwy politics, personal greed and . . . their smoking habit.

Valiant Tobacco Company’s PR man Merwin Wren (Bob Newhart) pushes through an promotion he thinks will make his beleaguered industry popular again: Valiant sponsors a sweepstakes touting a $25 million dollar prize for the first township that can quit smoking entirely for thirty days. The closing of an air base has plunged Eagle Rock, Iowa into an economic depression. The popular but vain and ambitious Reverend Clayton Brooks (Dick Van Dyke) seizes on the contest as a way to revitalize the community, as well as earn him a reassignment to a more desirable community. Brooks sets about promoting the contest from his pulpit, and twisting the arms of neighbors that say they won’t cooperate. Brooks browbeats his wife Natalie (Pippa Scott of The Searchers) into signing the pledge, and talks the neurotic Edgar Stopworth (Tom Poston) into leaving town for a month. Meanwhile, Valiant Tobacco becomes nervous, as Merwin all but guaranteed that no town could possibly qualify. Reverend Brooks brings other groups and individuals into line with bribery and threats — it’s American grass roots politics at its best! His most questionable deal is with the radical right-wing Christopher Mott Society. Its fanatic leader Amos Bush (Graham Jarvis) says ‘no’ until the Reverend offers to let the Motts help police the 30-day test period, along with the zealots of the local chapter of the ‘Sons of the Confederacy.’ That seals the deal, even if members like the ancient Odie Turman (Judith Lowry) would rather hunt Communists. When the trial period starts Eagle Rock becomes a madhouse. Individuals experience radical personality changes without their nicotine fixes. The news media descend on the suddenly-famous town, which is transformed overnight into a commercial ‘big carnival.’ A general (Charles Pinney) tries to co-opt the cold turkey strike as a publicity opportunity for President Nixon. Reverend Brooks has his hands full stopping outbreaks of almost-smoking, while the devious Merwin Wren prowls around the periphery, using dirty tricks to induce residents to light up.

Filmed on location in three small Iowa towns, Cold Turkey is really a ragged stack of humorous character sketches, vignettes that add up to a portrait of a dysfunctional America. Some great comic actors shine in ensemble mode. Barnard Hughes’ tobacco-addicted doctor goes nuts in his own clinic and has to be restrained. Vincent Gardenia is terrific as the worrywart mayor, who undercuts Rev. Brooks’ efforts with his negativity. Graham Jarvis (A New Leaf) is amusing as the leader of a neo-Fascist John Birch lodge that consists of harmless-looking ordinary citizens. Hilarious Judith Lowry (The Anderson Tapes) does her finely-honed old lady act, snarling ‘Bullshit!’ at every opportunity.

Dick Van Dyke may be mis-cast, but not because he’s not playing a goody-two-shoes. He seems strangely subdued as a pragmatic self-server earning brownie points with his Bishop so he can get the hell out of Eagle Rock. A cagey politician at heart, Brooks must do the heavy lifting to get his community behind the project, and then can only watch it spin out of control as greed takes over. Those residents not working a racket to cash in on the tourist crowds, argue over how the anticpated $25 million will be spent. 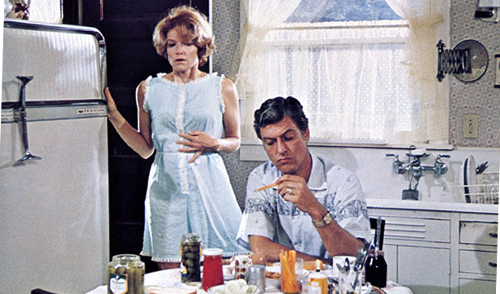 Reverend Brooks’ treatment of his wife Natalie too appalling to be funny. Brooks repeatedly asks for her opinion, and then doesn’t let her say a word as he fills in her presumed thoughts for her. If Natalie so much as frowns, he accuses her of ‘holding him back.’ Told to find emotional ‘busy-busy’ substitutes for their smoking habit, townspeople try most any activity and hobby. Clayton Brooks turns to sex, so a mechanical running gag sees poor Natalie submitting, several times a day. Under these conditions, what potentially could be an amusing dirty joke just seems cruel. A ‘fantasy’ gag has Natalie climbing to a rooftop to scream her lungs out in despair-rage. Several years before Network’s “I’m mad as hell!” scene, the almost Buñuellian gesture seems equally inspired. Yet is not well integrated into the film — why a ‘mental fantasy’ just then, and why for just Natalie.

I shouldn’t have to think about which of Pippa Scott’s characters gets the worst break, her Natalie Brooks in this movie or her Lucy Jorgensen way back in The Searchers. Although she’s kidnapped and murdered in the classic western, we barely see her suffer. Not so here. Norman Lear’s one strategy is to keep throwing funny actors at the screen to see who sticks. Tom Poston was never big yocks for this viewer, and his red face and rheumy eyes are just depressing. Bob Newhart’s big part is a colorless variant on his standard button-down character. His Merwin becomes a little more interesting when, even though the town appears to be winning, he insists that Valiant Tobacco has nothing to fear: he’s holding an ultimate dirty trick up his sleeve.

Not seen much is Edward Everett Horton as Hiram Grayson, the wheelchair-bound, speechless old guy who still technically runs Valiant. Grayson would seem a pale take on the Ernest Thesiger character in The Man in the White Suit; I’m curious if Lear ever intended to imply that the ancient Grayson’s infirmities were tobacco-related. Cold Turkey’s release was delayed by almost two years, and Horton died four months before the premiere. A few funny faces may have been all he could contribute, but he seems to be enjoying himself. That’s at least better than what happened with Bert Lahr in Normal Lear’s The Night They Raided Minsky’s: the great comic passed away before his any of his important scenes could be filmed. The mini-tragedy — a legend is cheated of final curtain appearance — all but put a curse on the show. The great Jean Stapleton is also not given much to do but look clueless, as she overeats in response to the tobacco ban. Stapleton would of course bounce back the next year as a major star in Lear’s All in the Family. The standout among the women with smaller parts is Barbara Cason (The Honeymoon Killers, House of Dark Shadows). Her Leticia has a lot of screen time, and attacks her busybody role with gusto. Of passing interest is Gloria LeRoy, who played a stripper in The Night they Raided Minsky’s and showed up numerous times in Norman Lear’s TV shows. Here’s she’s an out-of-town hooker who cleans up during the strike — the men of Eagle Rock will do anything to get their minds off smoking. One customer is none other than a young M. Emmett Walsh, who later fronts a ‘populist’ backlash about where the expected $25 million will go. (I edited an actors’ reel for Gloria LeRoy back in the early ’80s — she’s a fun lady!) Perhaps the best thing in the movie are the TV personalities Bob Elliott and Ray Goulding, who bounce back multiple times in bits as broadcasters, network anchors, etc, with names like Walter Chronic, David Chetley and Sandy Van Andy. Bob and Ray taught us the meaning of droll, underplayed satire; even Mad magazine revered and respected them. Their imitations of the vintage newsmen are an endearing, pleasant break from some of the film’s more raucous humor.

Director Lear keeps the action moving along by zooming across town from one comic disaster to the next, until Eagle Rock becomes something of an American Hell. There’s a strong parallel here with 1947’s Magic Town, the old failed fake-Capracorn comedy in which pollster James Stewart finds the perfect American town for poll samples, that stops being perfect when the news gets out and everything goes crazy. In Eagle Rock, even Reverend Brooks realizes that the notoriety of the contest has spoiled the town for good. With much of the fun knocked out of the show, the sudden violent gag at the finish hasn’t much bite.

The harsh message of Cold Turkey may be true, but it’s unwelcome news — ‘happy American hamlets’ are just as venal as the big cities, and they’re populated by factious, psychotic idiots anyway. Is the movie prophetic, or was it always so. I wish we could put that question to Samuel Clemens.

And this is in 1969 or 1970, before the high-paying factory jobs all went overseas and before the Walmart steamroller put Main Street America out of business. I also don’t remember seeing any minorities represented in Cold Turke. Although that may be the norm for rural Iowa in 1969, it seems odd for Norman Lear — either that, or he didn’t fully integrate all his liberal positions until All in the Family got underway. Interestingly, when fellow film student Clark Dugger told me about Cold Turkey back in 1971 I thought it was silly — who cares if people smoke or not, what’s the big deal?   That’s certainly changed. As a Californian it’s now a big problem if anyone lights up anywhere near me. And I grew up in a home that was practically a cigarette chimney! Olive Films’ Blu-ray of Cold Turkey is a good encoding of a picture that never looked all that attractive, even with its picturesque small town setting. Olive performed the transfer themselves. The show at least now looks consistent. The widescreen image shows off producer Lear’s big crowds and helps display writer Lear’s inventive visual gags.

Olive offers no extras. The movie would go well with the 2006 comedy Thank You for Smoking. For the record, I’ve never been a smoker. It IS refreshing to see a movie from almost fifty years ago, that treats tobacco smoking as such an ugly, filthy habit.