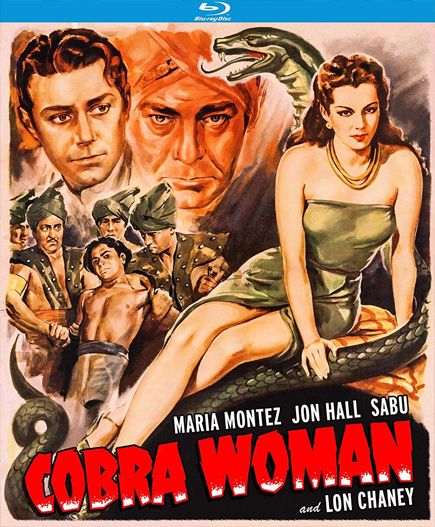 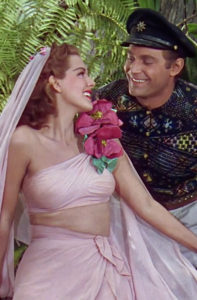 In the early 40’s Universal Pictures was still best known for its shadowy black and white horror shows. That all changed in 1944 when the studio produced the kind of candy-colored dreamland not seen since Dorothy woke up to Oz. The movie was Robert Siodmak’s Cobra Woman starring Maria Montez, Jon Hall and studio stalwart Lon Chaney Jr., last seen putting the bite on Louise Allbritton in Siodmak’s Son of Dracula. There aren’t any vampires in this florid South Sea adventure but this is Universal, after all – villagers are dying and the bite marks on their throats suggest Siodmak’s latest wouldn’t stray too far from the studio’s comfort zone.

Montez plays two roles, a moony island girl named Tollea and her twin sister Naja who rules far-off Cobra Island with an iron hand and lethal décolletage. Local dissidents hatch a plot to dethrone the evil queen and count on the good-hearted Tollea to save the day. Hall plays Namu, Tollea’s betrothed and the Indian actor Sabu Dastagir, known simply as Sabu, is his scrappy little sidekick. All three wind up playing hide and seek in the bed chambers and dungeons of the queen’s palace where mistaken identities, pagan sacrifices and the occasional cobra dance combine to prove that a plot can be both simpleminded and convoluted. 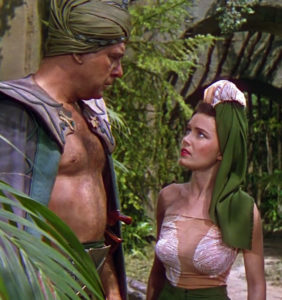 With the hulking Chaney playing a chivalrous mute named Hava and Lois Collier as Veeda, his diminutive inamorata, the film is loopy fun for intrepid Universal horror fans. But the real attractions of Cobra Woman – what made it the springboard for a thousand and one drag shows – are the same outrageous depictions of the beau monde that galvanized Charles Ludlam of The Ridiculous Theatrical Company and inspired Gore Vidal to embrace Montez as the Fountainhead of Camp in Myron, his movie-obsessed sequel to Myra Breckinridge. No doubt Vidal was mesmerized by the auburn-haired beauty but Jack Smith, the underground filmmaker and part time fashionista, seems to have staked his entire career on the face, form and Bizarro World couture of Maria Montez.

Smith’s notorious satire Flaming Creatures (in 1963 Arthur Knight lamented it defiled “both sex and cinema”) was loosely based on Arthur Lublin’s Ali Baba and the Forty Thieves, a swashbuckling fable starring Montez that, along with Arabian Nights, commenced her Technicolored reign. To make sure ticket buyers didn’t miss the connection, Smith cast the self-anointed  “Mario” Montez, drag artiste and Warhol Superstar, as the lead in Flaming Creatures. Though the real Maria was their guiding light, Ludlam, Vidal and Smith also owed an enormous debt to the dedicated Universal technicians – men and women who in the pre-Montez era earned their paychecks assembling Frankenstein’s laboratory, trimming the Wolfman’s body hair and dressing the Bride of Frankenstein. 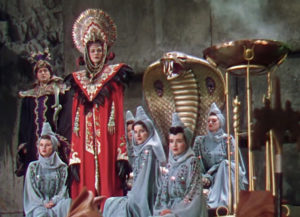 Working from a screenplay by Gene Lewis and Richard Brooks (who went on to direct similarly hot-blooded potboilers like Cat on a Hot Tin Roof), art director Alexander Golitzen decorated Cobra Island like a Christmas tree in a Las Vegas bathhouse, cramming Naja’s domain with gaudy serpentine curlicues and gleaming pedestals that belch green smoke ala the Wizard’s Art Deco enclave in the 1939 classic. Meanwhile costume designer Vera West took aim at the cast, draping them in bejeweled headdresses, broad-shouldered capes and multi-colored turbans that wouldn’t look out of place in a Dr. Seuss fantasy. 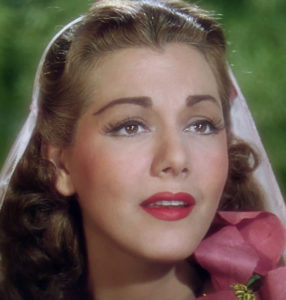 The cherry on top of this gleefully fruity concoction was the Dominican-born Montez herself who came to Hollywood in 1940 and was quickly typecast as the fiery exotic in a handful of adventures like White Savage where her red mane and rosy cheeks reached critical mass under the authoritarian eye of Technicolor’s color director Natalie Kalmus. It’s hard to argue with Montez’s unofficial title as The Queen of Technicolor but no one would suggest she was Stella Adler material – not even Siodmak who said, “… Montez couldn’t act from here to there but she was a great personality and completely believed in her roles: if she was playing a princess you had to treat her like one all through lunch but if she was a slave girl you could kick her around anyhow and she wouldn’t object – Method acting before its time you might say.”

Siodmak, one of the most agile directors of film noir – he even brought a cynical gin-joint attitude to the gloomy gothic Son of Dracula – directs the film with a sober nature that somehow enhances the movie’s Looney Tunes disposition. Cobra Woman is certainly memorable – not for Siodmak’s usual hard-nosed mise-en-scène but its hallucinatory Mardi Gras atmosphere. 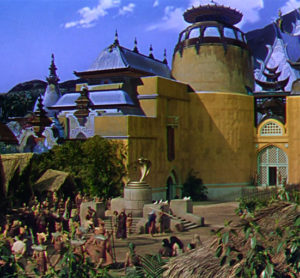 The movie was photographed by the tag-team of W. Howard Greene and George Robinson. Green lensed the resplendent 1943 version of The Phantom of the Opera and Zoltan Korda’s glorious The Jungle Book while Robinson specialized in the rich black and white chiaroscuro of Universal’s horror output like Frankenstein meets the Wolfman and the gothically-inclined Holmes film, The Scarlet Claw. One could surmise that Green was the guiding light behind the cheerful outdoor scenes while Robinson commanded the shadow-heavy night scenes. Russell Lawson’s sumptuous matte paintings, from sea-swept landscapes to vaulting castles, complete the fairy tale illusions.

Kino-Lorber’s new Blu ray brings that imagery to startlingly vivid life – this 75 year-old island girl has been around the block and then some but she looks fresh from the beauty parlor. The disc is a fairly bare-boned affair with a selection of trailers including Cobra Woman and Dr. Cyclops and a commentary from film historian Phillipa Berry.