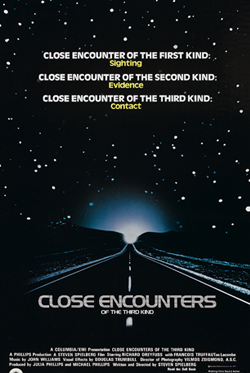 Close Encounters of the Third Kind

Steven Spielberg was playing with house money after the enormous success of  Jaws and he struck pay dirt again with this epic sci-fi fantasy chock-full of brilliantly composed panoramas and cracker-jack suspense scenes. Filming largely on the biggest indoor set ever constructed (inside a gigantic World War II dirigible hangar in Mobile, Alabama), CT3K races through its 137 minutes without breaking a sweat, arriving at a climax at Wyoming’s Devils Tower that is one of the most ecstatic moments in movie history. Vilmos Zsigmond’s Oscar winning cinematography helps make that sequence and the rest of Close Encounters a memorably visionary experience.