The USSR’s Cinerama knockoff proved a ‘good business’ between the rival superpowers, when some producers imported and re-edited six Soviet Kinopanorama travelogues to make an action- & culture-packed 3-panel Cinerama attraction. In some ways it’s one of the best. 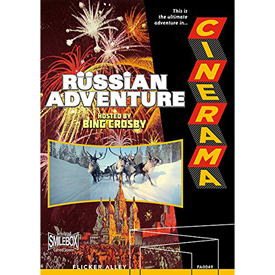 And Now for Something Completely Different, or, There’s Always Something New to Learn. The excellent Flicker Alley series of Cinerama restorations dazzles us with their technical virtuosity and inform us of the series’ function as propaganda in the Cold War. Project mastermind David Strohmeier deserves some kind of award.

On the flip side of the Cold War’s military standoff was waged a dirty trade & commerce war, wherever Russian and American desires to sew up foreign markets conflicted. We propped up South American juntas to guarantee privileges for American companies, while the Russians put enormous resources into convincing the Middle East, India and Southeast Asia that they’d benefit from better trade relations with the Soviet bloc. If Pakistan or Liberia sponsored a trade fair, U.S. and Russian vendors would be elbowing each other like cats and dogs. Frank Capra wrote about rushing to foreign countries to speak on behalf of American goodwill, and the State Department subtitled his movies so he could present foreigners with an ideal picture of the American dream. Thanks to Tom Weaver, we know that the stars of a tiny Robert Lippert movie being made in India were all but ordered to attend a trade fair and extol the virtues of partnership with the U.S.. The State Department wanted to counter a propaganda blitz being attempted by the Soviet trade mission.

Cinerama was always a dubious format, one almost guaranteed not to be profitable. Three filmstrips had to run in perfect synch, and maintain identical image quality. Film labs and the projectionist union LOVED Cinerama. But the U.S. State department thought Cinerama the ideal showstopper to convince foreign and the Third World that America had all the answers — it would wow the heathen at fairs and special showings around the globe. One of the earlier Flicker Alley disc presentations has a featurette about a portable Cinerama setup in use in France.

Well, those Russians didn’t want to be upstaged. They copied Cinerama, dubbed it ‘Kinopanorama’ and starting in 1958 or so made their own movies promoting the national cause. The main technical difference was in the film perforations used… but the experts say that the formats were completely compatible. It’s likely that the Russians wanted to be able to use Cinerama’s theaters already in place in various foreign countries. A street scene in the Soviet film I Am Cuba (Soy Cuba) reveals a Cinerama Theater in downtown Havana! [ A question for today’s tourists — is it still there? ]

The original 3-panel Cinerama format had a run of only about 11 years. While the last American-made release How the West Was Won was still playing up on Hollywood Blvd., the new Cinerama Dome on Sunset was premiering ‘single-strip Super Cinerama 70’ with the comedy epic It’s a Mad Mad Mad Mad World. That’s when an independent producer named Hal Dennis cooked up the notion of importing a Soviet Kinopanorama title, adapting it for American audiences, and coming up with a ready-made feature for Cinerama exhibition. The crazy idea began with making a deal with Mosfilm, the details of which aren’t forthcoming from any direction. The State Department was involved too; the Soviets didn’t seem to mind that the Americans would be re-editing their films. Perhaps they had script veto power.

We’re told that Cinerama’s Russian Adventure debuted so late (1966) that only one theater in Chicago actually showed it in real Cinerama; elsewhere it was printed down to normal 70mm. It’s a great show, among the most entertaining of all the 3-panel movies. Hal Dennis was able to pull sequences from six different Russian movies, which gave him more variety to choose from: note the six directors listed above. The show has plenty of material that turns the movie into a rollercoaster experience, but there’s also a wide range of subject matter. Those Russian directors are also more adventurous in their use of the camera. 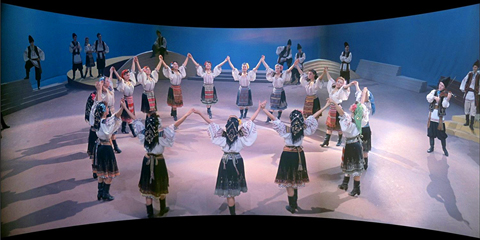 The main image from Russian Adventure is the reindeer sled race seen on the posters. Bing Crosby introduces the film on camera and provides a narration that is as politically neutral as one could imagine. We hear hints in some of the extras that Russian material may have been dropped for political reasons, and it’s easy to imagine that the original Soviet films would contain patriotic military material.

Watching Russian Adventure, you’d think that the U.S.S.R. was that nice neighbor to the East. Growing up in the 1960s, I can vouch for the fact that average American audiences might be disturbed by this close-up look at the Enemy. Was it even patriotic to go see the U.S. presentation of War and Peace?  What if the Commie taint rubbed off?  People on the streets of Moscow use a beautiful subway system. Some drive cars. All put up with the snow. None of them look scary or scowl like Nikita Khrushchev. Could they just be normal people?

Just remember that several American-made Cinerama movies are packed with demonstrations of military hardware and scripted with a fair amount of ugly anti-Soviet narration. The supposedly spiritual Search for Paradise pokes around the borders of various Soviet Republics looking for the real Shangri-La. We’re repeatedly reminded that freedom ends at the Soviet frontier, while the narrator insults a Red Chinese visitor.

Russian Adventure has its slow passages but is livelier than most of Cinerama’s offerings. We’re shown big cities and industrial centers, railways and far-off forests. The closest the film comes to extolling Soviet Expansionism are scenes of scientific work being done in Antarctica. Some staged underwater footage shows ‘peaceful’ crabs being stalked by an ‘evil’ octopus. The narration is typically American, but the up-close underwater cinematography in Kinopanorama is really impressive.

The only objectionable sequence has good historical value — a long episode of whalers in pursuit of their prey in Antarctic waters, with the entire process shown. The harpoon fills the freezing water with blood, and the giant whale is hauled aboard a mother ship and taken apart with appalling efficiency. ‘Twas ever thus, but this is the factory system that prevails now among outlaw whaling nations like Japan. Some PC audiences consider material like this as offensive as images of the killing of people.

Most episodes have a ‘chase’ theme or some dramatic forward motion to exploit Cinerama’s subjective illusion. A couple of sequences are fantasies. A man in the wilderness stalks a deer with a camera, and a sleeping beekeeper imagines a family of bears overrunning his hives. The bears are obvious trained performers, a surprise that sneaks up on us when we see them loading hives onto a wagon, for a quick getaway. It’s pretty amusing.

The most eye-opening sequences take place in a Russian circus. The daring camera angles get in close on horses as they gallop around the circus ring. The stunts on the horses and with the aerialists are all impressive, but they’re blown away by one spectacle — four large lions are trained to ride on the backs of four big (and heavily padded) horses. I would never have believed such a thing possible.

As soon as I put the disc in, I thought, this thing has got have some ballet in it. The first-act closer is a dazzling folk troupe presentation. Again, the angles make all the difference — the Soviet directors aren’t content to stand back and stay static, as happens too often in the American-produced pictures. The dancing and costumes are certainly tops. The show finale is about a dozen excerpts from ballet performances, presumably culled from longer sequences in some of the original films. [The titles in the list I have are only in Russian, so I can’t tell one from another. ] We see a big chunk or two from Giselle but also some less familiar operas ( Othello?). The most amusing is a beautifully costumed fantasy in which a ballerina plays a magic pony, with a perky tail — we almost believe that she is an animal. It’s utterly charming. 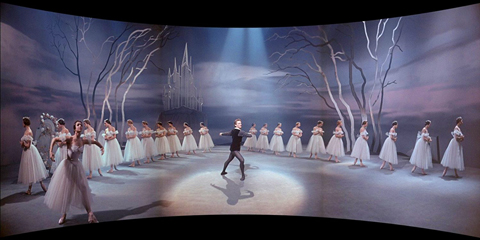 Flicker Alley’s Blu-ray + DVD of Cinerama’s Russian Adventure is yet another technical marvel by dedicated independent film restorers. There being no industry or public-owned entity that would bother to save these pictures, the service performed by these people is a happy phenomenon and the culmination of several dedicated careers. As can’t be explained too often, the three panels had to be separately restored, scanned and painstakingly combined in the digital data-space; the restoration demos show how they were re-timed from faded and damaged elements. The new digital compositors also used various mattes and vignette tricks to render the seams between the three panels less visible. I remember even in How the West Was Won, that some scenes barely seemed to fit together.

Russian Adventure has an active soundtrack with interesting, unusual music choices. I found it all very tasteful, even the circus music. To his credit, Hal Dennis didn’t try to Americanize anything.

This release has no lack of extras. 1964’s Fortress of Peace is a single-strip Cinerama short subject showing the defensive capabilities of Switzerland. Startling scenes show various war-game spectacles in great clarity — a land assault, aerial attack with machine guns, bombs and rockets, etc. We see scores of trees blasted to bits and an entire rock face dynamited. Concorde is an in-development promo for the supersonic transport — we see designs and the testing of exotic metals and other innovations that make the jet seem decades ahead of its time. 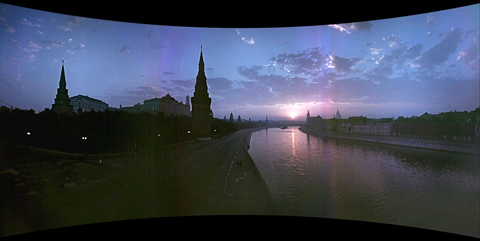 The main making-of feature is a long interview with Hal Dennis’s sons Craig and Hal Dennis Jr., both of whom worked as editorial assistants at a young age. They talk about having to watch hours and hours of Russian footage, and the sheer bulk of heavy film reels in the cutting room. They don’t have too much info about how the film came about, but we learn enough to know that it was an international effort condoned by the State Department.

A full collection of Cinerama trailers follows, along with the usual galleries of ad materials. Search for Paradise has all that glorious Dimitri Tiomkin music going for it, but Russian Adventure is easily the next most entertaining of the Cinerama presentations on disc.

A special note of congratulations: one of the producers of this restoration is our friend and associate John McElwee of Greenbriar Picture Shows. I hope John talks about all at his page sooner than later.