Giuseppe Tornatore’s romantic ode to the movies charmed America, convincing theater-goers that little Italian kids are the cutest in the world. Little Salvatore Cascio grows up in a projection booth under the life-tutelage of kindly Philippe Noiret. Arrow presents the theatrical version of this Best Foreign Picture Oscar winner in 4K Ultra HD. The (greatly) extended version is on a second Blu-ray — it plays like a different movie entirely. 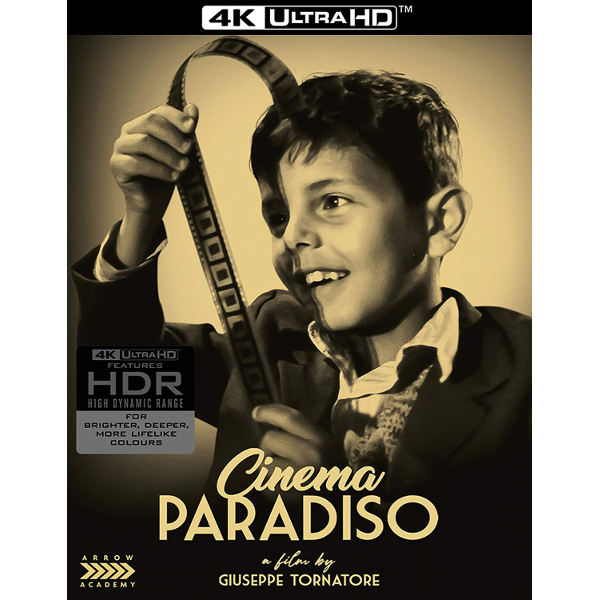 Every so often there comes along a European movie that so captures American audiences, one would think it was tailored for export. Anybody remember 2011’s The Artist, a movie I’d sooner forget?  Then there’s Amélie from 2001, a confection so sweet it turned off many while seducing the entire country. I admit that I’m in the ‘charmed’ category, especially for Yann Tiersen’s music.

Joining the likes of France’s The Umbrellas of Cherbourg and A Man and A Woman is the Italian hit Cinema Paradiso, a film that was embraced by the U.S. in no uncertain terms. It’s got an adorable kid, a moving multi-generational story, and in a long version that only showed up here later, an intense love story. And that’s not including a sentimental music score by Ennio Morricone. Cinema Paradiso shows clips from dozens of Italian movies even I can’t recognize. That only makes this ‘national epic’ of movies seem that more exotic. 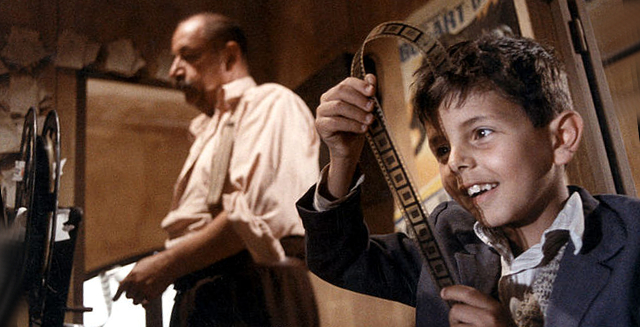 The foreign movie splash of 1990, Cinema Paradiso was a solid hit and award winner for Giuseppe Tornatore. Films that invoke the love of movies and the dreams they inspire often turn into mush, but Tornatore’s tale of the life of a ragtag tot who projects in a provincial Sicilian theater, and the romance of his life, manages to mix cinema, with the cinema in the cinema, and come out on top.

Slashed by a half hour for American audiences, Cinema Paradiso is one of many Miramax films routinely cut down upon import, a practice that few seem to notice in pictures such as Like Water for Chocolate (123 to 105 min.), or Amélie (129 to 122 min.). The good news is that Arrow’s Blu of Cinema Paradiso contains both cuts — the American release and an extra-long one that Tornatore assembled in 2002.

Against the objections of his mother (Antonella Attili), tiny Salvatore (Salvatore Cascio) hangs out at the Cinema Paradiso, where projectionist Alfredo (Philippe Noiret) lets him play with the dangerous nitrate film clips. Salvatore watches while Father Aldelfio (Leopoldo Trieste of The White Sheik and Seduced and Abandoned) censors each new film before it screens, so as to be free of kisses, bare legs, and nudity. Unforeseen events cause Salvatore to take Alfredo’s place as projectionist. The changes in Italian cinema cruise by as he grows to manhood, frustrated by some things in his life but enchanted by his own love, Elena (Agnese Nano). 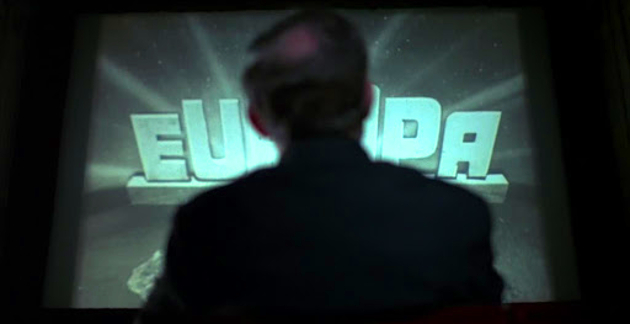 Almost multi-generational in the Edna Ferber sense, Cinema Paradiso uses a flashback format for the fiftyish Salvatore, played by actor Jacques Perrin of “Z”, to reminisce about the magic of his youth and his bittersweet romance with Elena.

Slightly stylized techniques lend a quality of magic realism to some scenes, such as the carved lion projector port that comes alive at one dramatic moment. We see many film clips projected on the Paradiso’s old screen, familiar Italian classics like La Terra Trema and Il Grido and many (public domain) American titles — It’s a Wonderful Life, Stagecoach. Tornatore doesn’t play games with film history, and the titles help film fans keep straight the movie’s chronology. They also make mild comments on Salvatore’s situation: trapped in Giancaldo for the summer, he shows Ulysses, and we see the scene where the cyclops Polyphemus suffers in blind agony. 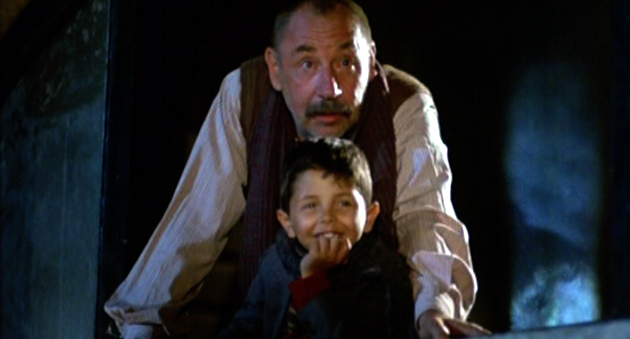 Tornatore works Cinema Paradiso into the ‘glowing memory’ school of continental filmmaking. The European past is seen in a nostalgic light, and picturesque locales are made to look gorgeous, better than they could possibly have been for real. Salvatore’s little stone town is a stunner, for sure.

Getting things off to a magical start are veteran Philipe Noiret (Georges Franju’s Thérèse Desqueyroux, Coup de torchon, Il Postino) and young Salvatore Cascio, the cutest little boy ever in the movies. The mystery of life is seen through his eyes — the loss of his father in news delayed long after the war’s end, Alfredo’s accident, and the birth of a new Cinema Paradiso.

Salvatore makes his own 16mm movies. He goes directly from recording the goings-on in a slaughterhouse, Franju-style, to using his camera to snatch precious images of the beautiful but unapproachable Elena, whom he worships from afar. Thankfully, there’s nothing Peeping Tom-ish about his intentions. (spoiler) In the long run his patience does no good, and fate separates the pair. The romantic finales that Salvatore worships in the movies, don’t seem to play out in real life.

In the shorter (124-minute) version distributed in 1990, the middle-aged Salvatore journeys to Giancaldo and turns over the ashes of his earlier life, witnessing the dynamiting of the Paradiso to make way for a parking lot. Then he returns to Rome and screens a special film Alfredo saved for him over the years, providing a clever and organically sound ‘cinematic’ conclusion.

The longer original Italian (155-minute) version presumably retains longer versions of many earlier scenes, and other moments and scenes that would have fleshed out the show. But the 2002 (174-minute) version is a director’s re-cut that reshuffles some scenes and reinstates a major plot line, complete with characters and actors not seen in either version released before.

The added material contains great, emotionally wrenching content that amplifies the original and in a way brings a satisfactory closure to the movie. It’s strange to discover a new dimension to a film one already admires. Without divulging what the big deal is, I can say that events both in 1960 and the present are given new complications, making Cinema Paradiso a much deeper and more ironic love story.

A major role in the added footage is played by Brigitte Fossey, who was famous as the little blonde girl in René Clément’s unforgettable 1952 Forbidden Games. Forty years later, she’s still beautiful. She’s an excellent choice for a film dedicated to cinema heritage.

There’s no denying that the extra-long version is … really long. Not only is the pacing a bit lacking, the final modern section does seem to be starting a new movie, and there’s always resistance to that. At three hours, seeing how its destiny would be on DVD anyway, Tornatore should have worked in an intermission. I saw it in two halves over two nights, a plan that I recommend.

Once again, Ennio Morricone provides a music score worth dying for … in 1990 it was yet another Oscar- worthy score ignored by the Academy.

Arrow Academy’s 4K Ultra HD + Blu-ray of Cinema Paradiso is basically the same as their Blu-ray release from 2017, with the edition of the new 4K encoding. What before was sharp and well-defined is now sharper and richer — the wider contrast range allows the time to let scenes be darker than normal — we still see into the dark areas of the frame. The 4K encoding is only for the theatrical cut, and it’s one version per disc.

As was the case before, Giuseppe Tornatore’s presence is everywhere on the disc, with commentaries and featurettes from several points of view. Favorite director Francesco Rosi gets to speak in one long featurette-docu that is as much about Tornatore’s Sicily, as it is the filmmaker. It contains excellent scans of his personal movies.

American viewers may be particularly interested in a featurette in which Tornatore explains and names all the sources for the remarkable kissing scene montage — a collection of censored kissing moments assembled by the soulful projectionist for his viewing pleasure. The sequence delivers the message that kissing is better in Italy than anywhere else on Earth. The only antecedent to this that I can recall is a sequence in Tomés Gutiérrez Alea’s Memorias del subdesarollo (Memories of Underdevelopment). A movie projectionist screens for a select group of hipsters a reel of shots that pre-Castro censors deleted from movie prints — a reel of ‘forbidden bits.’

The full list of extras is below. Viewers intrigued by Giuseppe Tornatore’s Cinema Paradiso might want to seek out his wonderful Everything’s Fine (Stanno tutti bene) (1990) with Marcello Mastroianni, The Legend of 1900 (1998) with Tim Roth, and the better-known Malèna (2000) with Monica Bellucci.