After five years of combining animated short subjects, and a combo live-action/animation feature, Disney dove into full feature animation fantasy again with the most basic of Fairy Tales. Just because he learned to create animation for a price doesn’t mean that the quality slacked off — the wondrous design and animation is augmented by terrific songs. Yes, half the picture is about cute mice and birds and other critters … which are done so well, the show is worth seeing multiple times. This handsome Signature Collection release follows earlier Diamond and Platinum releases … and don’t ask me to decode that classification system. 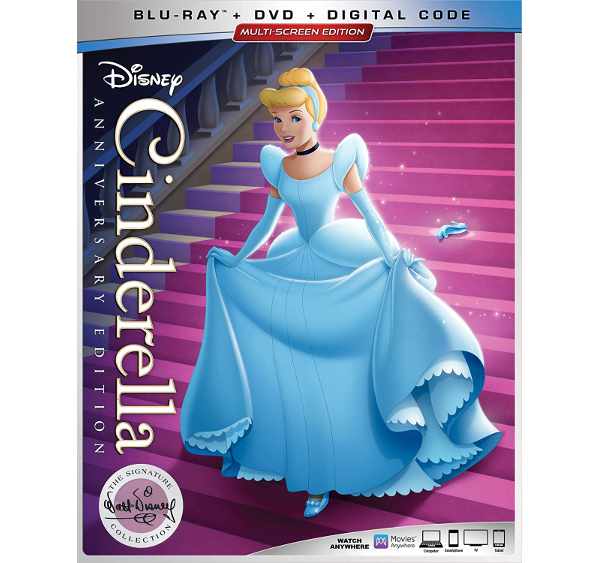 After revolutionizing animation, the movies, and entertainment in general with his 1937 mega-hit Snow White and the Seven Dwarfs Walt Disney discovered that producing marvelous, intricate, uncompromised works of animation art was so expensive, it’s not easy to make them profitable. Walt stuck to his high art principles through Fantasia, and couldn’t earn back his costs. And even when he made the less expensive Dumbo, the war kept him from distributing it almost anywhere outside the U.S. except for South America. The second whammy of the 1940s was the unionization of his animators, who didn’t like working at the prices he set. Disney eventually caved in but drove away some of his most talented collaborators. By the late ’40s he was experimenting with part-animated films and strings of short subjects grouped into musical-themed features. According to the experts, what saved the budding Disney empire and set it on the road to cultural domination was the unqualified, highly profitable 1950 hit Cinderella. Disney’s corps of writers and gagmen hit upon a great idea to freshen the universally known fairy tale plotline: the standard narrative is embellished with the comic antics of Cinderella’s animal friends: mice. And a few birds. And the family dog and horse.

And what’s wrong with that?  I can imagine Disney charging his animation story geniuses to discover a fantastic adaption idea for the unbreakable tale that came to us through the Brothers Grimm from Perrault and earlier (14th century) storytellers:

‘Just make it amazing and heartbreaking and delightful — no chopping off toes ’cause of little kids — smooth out the rough edges for modern consumption. BUT DON’T CHANGE A THING because everyone knows the story by heart, and it better have a coach made of a pumpkin, mice turned into horses and a glass slipper. Good luck!’

Disney elected to tell the basic story extremely straight, and to embellish it with a bundle of cute, adorable animals. The more modern animation style employed abandons the full-dimensional figures of Snow White and Pinocchio but not the delicacy of Disney’s master character animators; The Prince may be a little stiff and unexpressive, but Cinderella, her imperious stepmother & bratty sisters, and the fairy godmother are wonderfully rendered. All of those lovable mice are equally expressive, especially Gus, the chubby new rodent in the house. Taking top animal honors is Lucifer the cat, a fussy, spiteful and fully contented rotten villain, always one claw swipe away from nailing himself a mouse meal. The various mouse-cat confrontations owe little to the Guignol mayhem of Tom & Jerry cartoons. To be honest, without the charming mouse scenes Cinderella might be a bore.

The designs are pure Original Princess Vintage, and quite stylish. The animation background art is in the modern mode, with skewed perspectives and limited detail, yet they lend scope and texture to the various episodes. Special effects animation adds mists, stardust and sparkly magic as required. When Cinderella’s sisters destroy her ball gown, she runs to cry beneath a weeping willow tree that looks like it belongs on the banks of the Isle of the Dead. The Prince’s castle is not merely enormous, it’s gigantic beyond all reason. Bringing the story even more fully to life — and making the movie a pleasant repeat experience for adults — is the marvelous music score. Disney’s animated hits now emulate Broadway shows, with musical numbers every few minutes; this makes it easier when the cartoons are adapted into Broadway musicals, and then back into live action carbon copies of the cartoons. How soon will someone look at the new CGI effects feast The Lion King and say, ‘you know, this would look good animated.’ For me, none of the modern sub-Sondheim efforts can touch the freshness and magic of the music that Disney put into his work when he was alive. The orchestrations and character touches for “Bibbidi-Bobbidi-Boo” and “The Work Song/Cinderelly Cinderelly” are fascinating — I can still hear those sped-up mouse voices harmonizing.

In the story Cinderella’s step-relatives are cruel and heartless without further explanation. Disney doesn’t invest psychological complexity in his villainous Stepmother Lady Tremaine, so she doesn’t show up in the roster of later, absolutely fabulous bad beauties, like Maleficent and Cruella De Vil. She’s just a rotten b____ through and through, keeping Cindy in her place through bullying, false promises and whatever other haughty humiliations she can think of. Come to think of it, what’s Lady Tremaine’s big problem? Did she murder the late Mr. Tremaine’s first wife, and therefore hates Cinderella because she looks like her ma? It seems to me that if Cinderella should be so lucky as to become a princess or a queen or whatever, Lady Tremaine should just play along, ride her stepdaughter’s bridal train into the palace, and enjoy life. What a maroon.

Feminist (humanist?) critics of the story and Disney’s movie see Cinderella presented as a victim pure and simple, forgetting that Cinderella’s plight aligns with untold millions of women that have no choice but to accept the lives that cruel fate deals them. She’s no dummy to get her hopes up, as Lady Tremaine has promised her that she can go to the Ball. She has every reason to despair because nobody (human) seems to be on her side. The Fairy Godmother-ex-machina is more than welcome. We know that Cinderella is working when we feel for our heroine, and fall in with the suspenseful business on the stairs when she’s been locked in her room, and her mouse friends are trying to save the day. Cinderella is great light entertainment, perhaps not Disney’s artistic high point, but a movie well deserving of its exalted status.

If Walt Disney’s Signature Collection Blu-ray + DVD + Digital Code of Cinderella is substantially different than the 2012 Diamond Edition Blu-ray, I can’t tell — both look flawless. Perhaps the encoding has changed somewhat in seven years?  I wonder if Disney now reissues (commercially lucrative) home video classics on a seven-year cycle the way they once did theatrical reissues — with the idea that every seven years brings forth a new crop of kid customers.

I’ve heard a lot about Disney flattening out the art and look of their features, but on Blu-ray I haven’t noticed that sort of treatment. In fact the only release I thought was futzed was the Platinum Edition of Peter Pan in 2008, that altered the film’s color scheme. Cinderella looks very clean. Since the show started with flat artwork, it’s probably best to consider this final product as doing its best to skip the film generation in its presentation, and reference that original artwork directly. After all, the usual clues telling us that we’re watching film are things like heavy contrast, excessive grain, image unsteadiness, surface dirt and scratches. If I’ve seen Cinderella in 35mm IB Tech I was too young to remember it; the last time I saw it was with my daughter at a matinee in the early 1980s. That was film and it didn’t look nearly as good as this (but much better than Seven Dwarfs, which Disney had adapted to 1:85!). If Disney refrains from revising scenes, re-dubbing voices or radically altering colors I can’t see any reason to complain.

The disc offers five ways to watch the show. On Blu-ray, there’s the standard 1:37 format, a ‘DisneyView’ 1:78 format with added sidebar embellishment, an ‘In Walt’s Words’playback mode that augments the film with a narrated production history with photos and original art; DVD, and a digital playback code.

By now Disney has generated so many extras for its top titles that the first generation of Standard-def features have been dropped. You’ll have to go back to the Diamond Edition to see the interactive ‘Personalized Digital Storybook,’ plus older games, docus, featurettes and galleries. My favorite old item is a piece on Verna Felton, the revered voice artist who dubbed The Fairy Godmother.

New to this edition is a Trivia quiz played by two stars from The Disney Channel. The other extras are labeled ‘older bonus,’ and there are a lot of them. An introduction by Diane Disney Miller, a making-of docu, an alternate opening sequence, storyboard comparisons, radio programs, and trailers are self-explanatory. The Real Fairy Godmother is a cute story of the design process and the woman who was modeled for the character. The Cinderella that Almost Was examines alternate proposed versions with different story ideas. A 2012 film called The Magic of the Glass Slipper seems aimed at the ‘Princess Experience.’ Another feature examines the Cinderella Title song. A Tribute to the Nine Old Men and The Art of Mary Blair pay tribute to legendary animators. Princess Fantasyland, was easy to steer clear of, but a 1922 Laugh-O-Gram Cinderella cartoon and an excerpt from The Mickey Mouse Club featuring actress Helene Stanley got my attention. No wonder Walt kept some of his behind-the-scenes contributors semi-anonymous — Ms. Stanley modeled the movements for Cinderella and other femme characters — and in the same year made an indelible impression as the oversexed bobby-soxer at the end of The Asphalt Jungle. She was also married to Johnny Stompanato for two years, yikes and double yikes.

A curious extra called ‘info’ got my attention. It’s the legal disclaimer!

Also worth mentioning are the full original Spanish and French tracks, also in 5.1. These brilliantly produced foreign versions have full alternate language lyrics for the songs; part of Disney’s astounding popularity overseas surely stems from the fact that his foreign language versions are so well produced. My wife can quote entire songs as she heard them as a child in Latin American theaters. “Todo se logra con sólo decir / Bibbidi-Bobbidi-Boo!” I was a bit dismayed, however, to see The Three Little Pigs on Netflix, only to find out that an alternate, scrubbed Spanish audio track and lyrics have replaced the originals… no longer do the pigs sing, “es un bribon, es un guasón!”