At least the title SOUNDS Christmas-themed! Preston Sturges’ sweet trifle is as simple as a sit-com mix-up, but the charm is in the lovable characters (the core of Sturges’ formidable stock company) and the sincerity of all concerned. Ellen Drew is the most deserving fiancé ever to pine for a wedding ring, and Dick Powell an oh-so-earnest Dagwood Bumstead type who banks his future on a goofball coffee slogan contest — just try and figure out the meaning of his winning slogan. In his second film Sturges confirmed himself as Hollywood’s newest comedy genius writer-director — although William Demarest’s perpetually flustered character is so well written and played, we’d think that the actor was simply living the part. 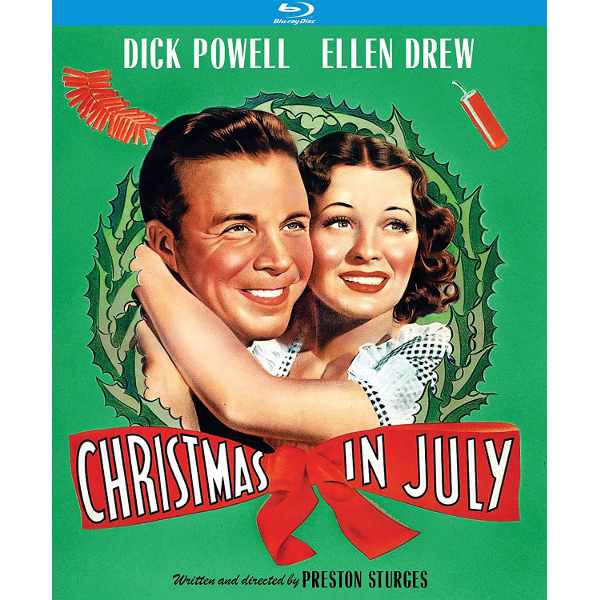 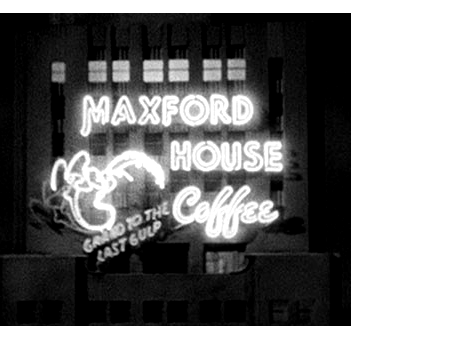 Preston Sturges’ second hit for Paramount turned away from The Great McGinty’s cynical hilarity about political corruption, to center on the down-home problems of ordinary people. He struck cinematic gold by building his comedy — a full-on farce — from the mundane reality of the times. The romantic characters live in city tenements and have little privacy. MGM’s idea of ‘down-home values’ also housed ordinary folk in modest surroundings… but Dad has a steady job as an honest judge, and mom has hired help to cook and clean up!

Christmas in July looks even less expensive than The Great McGinty, perhaps for Sturges to point out to Paramount that the moneymaking value in the show was HIS talent. The humor is anchored in adversity — it’s the sluggish rear end of The Depression, when an average salary wasn’t enough for most young people to get married on, and opportunities for promotion were rare. Like a prequel to a ’50s sitcom (think The Honeymooners) the show envisions Jimmy MacDonald (Dick Powell) and Betty (Ellen Drew) as frustrated young lovers able to find a bit of privacy only by sneaking up to the tenement roof. Even then, all that would be dared is holding hands and kissing (maybe). This isn’t MGM — these nice kids aren’t going to solve their problems by saying, “Gee Whiz!” and putting on a show.

“But how about ‘It’s bred in the bean?  The blueblood coffee?'”

Dick’s Jimmy MacDonald is an honest employee hoping to make it in advertising by winning a contest for a coffee slogan with a lucrative prize: $25,000. Before you can say ‘Lucy Ricardo,’ Jimmy’s prankster work buddies trick him into thinking he’s won. Jimmy and Betty are swept off their feet by the celebrity of winning; even the office fuddy-duddy that once discouraged Jimmy’s ambitions now recognizes him as an advertising genius. Jimmy and Betty are so excited, they go on a whirlwind shopping spree, hand out gifts to all their friends, and become the toast of the neighborhood.

The mixup ought to be a tragedy, a clear case of Counting Chickens before you Cash the Check. It is a bit distressing, but not nearly as bad as what happens in Albert Brooks’ Lost in America, where a maybe-comparable Yuppie couple try to Live Their Dream and all but destroy themselves. In 1940, movie fairy tales could still come true. We want to celebrate Jimmy and Betty’s optimism. Sturges makes their personal situation stand in for the hopes and dreams of the nation. We fear that all of this happiness is an illusion, an American Dream of pie in the sky that must soon come crashing down. When the coffee hits the fan, the bosses and businessmen are suddenly revealed for the stuffed shirts and empty drudges that they are, and Jimmy’s credibility seems irreparably broken. Will he ever be able to return to work again? 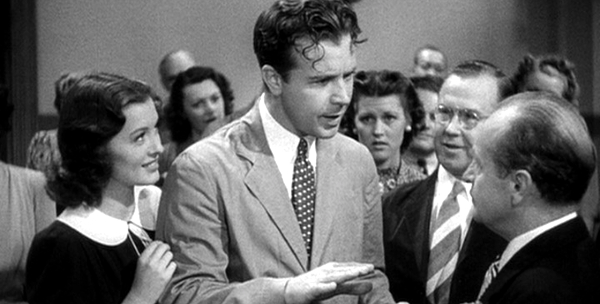 Jimmy and Betty may be in a pickle, but the real insanity is happening over at the Maxford House Coffee Company, where the unofficial leader of Sturges’ stalwart stock company William Demarest is the holdout on a hung jury trying to pick a winner slogan out of thousands of contest entries. These scenes in the Maxford House back room play like a slapstick version of Sidney Lumet’s Twelve Angry Men. Jimmy’s slogans all turn on words with double meanings, and the examples we hear don’t inspire confiden ce. His ‘brilliant’ contest entry reads like a complete loser:

The key to a winning slogan is usually that it is easy to understand. Nobody seems to understand this slogan, not even Betty. Jimmy not-so-patiently explains that it’s a play on words. ‘Bunk’ is a bed, but ‘The Bunk’ also means ‘nonsense,’ ‘bull’ or ‘baloney.’ Of course everyone but Jimmy believes that coffee inhibits sleep … has Jimmy somehow gotten the notion that coffee makes one sleepy?  But his slogan may actually say the opposite: the double negative is the mind-twisting culprit. Meanwhile, the bubble bursts over at Jimmy’s company, where he’s already been given a promotion and a new office. Betty tries to convince his boss that Jimmy is still the same creative guy even though the news about winning the contest was phony. Doesn’t he deserve to keep his chance at success?  Sturges handles it all beautifully.

The agony comes to a boil when all those businessmen realize they’ve delivered hundreds of dollars of quality merchandise to a penniless clerk. When Alexande Carr’s irate department store owner demands that Jimmy’s entire neighborhood be arrested, gravel-voiced cop Frank Moran gets in a good topical retort: “Who do you think you are, Hitler?”

Demarest is again the second-tier star, with hearty input from Raymond Walburn as the discontented chief of “Maxford House Coffee – Grand to the Last Gulp.” Franklin Pangborn is the flustered host of the Maxford Coffee Hour, doing a terrific job as the unctuous radio emcee. Future mid-range cowboy star Rod Cameron is one of the sorry office pranksters. Ernest Truex, Torben Meyer, Julius Tannen and Jimmy Conlin stand out among a typically big cast, and Paramount at least affords Sturges a lively crowd of extras for the homecoming scene in the street. Dick Powell and Ellen Drew are so painfully sweet and honest, we want to protect them throughout the film’s brief 67 minutes.

Christmas in July surely sealed the deal with Paramount regarding Preston Sturges’ ability to generate hits. His third film would be The Lady Eve, with big stars Barbara Stanwyck and Henry Fonda. But the rising tide of success didn’t raise all actors. Ex- crooner Dick Powell would soldier on in so-so parts, singing here, not singing there, until his breakthrough as a new kind of smart-mouthed noir tough guy in 1944’s Murder, My Sweet. As for the to-die-for lovely Ellen Drew, her big reward for this great performance was to be assigned to Paramount’s one and only imitation Universal horror movie, Stuart Heisler’s 1941 The Monster and the Girl. Her costar, other than an ape monster, was this film’s eighth-billed Rod Cameron.

Yes, 1940 was a more innocent time for Americans and American business. Christmas in July proves this by giving the goofy coffee company a name similar to the big national brand Maxwell House … and apparently no lawsuits for defamation or cease-and-desist orders were considered necessary. Another relevant thought to keep in mind when watching movies about young Americans around 1940 … is that practically every able-bodied male on view between 15 and 35 would soon be in uniform, far away from their loved ones, with all of their personal hopes and dreams put on hold for the duration of the war.

The KL Studio Classics Blu-ray of Christmas in July is a very good encoding of a film element that’s the best I’ve seen the film on video — it definitely has grain texture, which many find a plus. The first shot tilts down from a rear-projected city, and when the foregrounded Powell and Drew enter the frame, sitting on a rooftop, we almost think the film is in 3-D. The picture is stable and fully intact — I saw no damage.

The sound is particularly clear, which helps with the ‘full house’ of distinctive voices in Preston Sturges’ stock company.

A small grouping of trailers is present, and the one special extra, a full commentary with Samm Deighan, is quite good. Ms. Deighan is fully engaged with the world of Sturges, and begins interpreting shots and calling out themes from the start. She also ID’s Preston Sturges’ cameo appearance, which was news to me. She proposes that Sturges’ comedy overall comprises a general critique of our society, where money and success are made so important. She also gets deep into Sturges’ go-getter characters, overreachers that follow their dreams no matter how silly they may be. Sturges’ characterizations are compared with those of Frank Capra. Since Sturges later took on a sequel to Harold Lloyd’s famous silent movie The Freshman, the go-getter theme certainly seems apt. From Dan McGinty forward, all of Sturges’ characters are in one way or another desperate to avoid crushing failure.

The Great McGinty is due out soon on Blu, from Kino… I can’t think of a better release for an election year.

Since the late 1950s, Universal has had control of most of the pre- ‘1948 Paramount library. I was told back in the day that the problem restoring old Paramount pix was that no ‘deep file’ of film elements existed. When the library was transferred to MCA, only a couple of printing masters were kept for each title. If a master of an older Paramount film has damage or is of lesser quality, there may be nothing to back it up, unless something shows up from a distant archive. We’ve heard rumors that the available film sources for The Lady Eve are in such shape as to make a remaster difficult. Let’s hope that changes.