It’s a perfect movie for a dark time: Carlo Levi’s famed novel about a political undesirable became a major Italian miniseries by the great Francesco Rosi, starring the now-legendary Gian Maria Volontè. In Mussolini’s most popular years of make-Italy-great-again Fascism, a dissident is given an indefinite ‘time out,’ an exile to a small town in a corner of the country so remote and primitive that not even Christianity could fully change it. He expects nothing but receives revelations about his country, his life and one’s place in society. It’s meditative, it’s illuminating, it’s like a book one can’t put down. It’s also uncut, as opposed to the theatrical version that made a splash here in 1980, as simply Eboli. 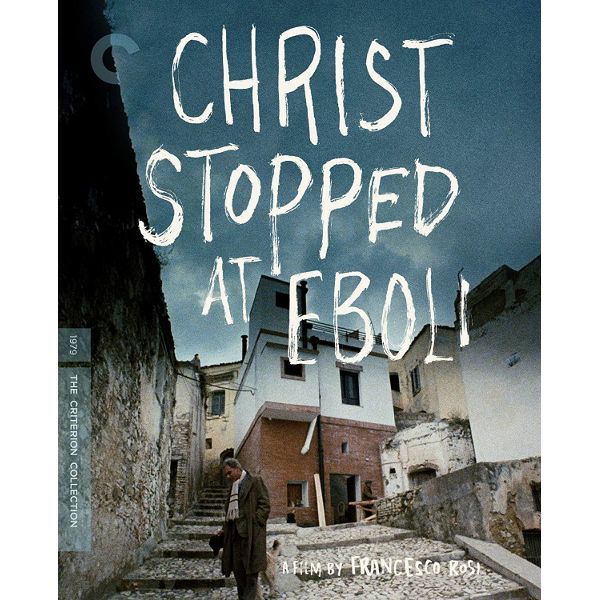 Thoughtful, serious films about the Italian countryside and its past traditions are respected and honored, but often a tough row to hoe. I admire the Taviani Bros. Padre Padrone and Olmi’s The Tree of Wooden Clogs but I can’t say they became favorites. Christ Stopped at Eboli is a different article altogether. It’s a story about political history, yet there are no violent clashes or calls to adopt a new viewpoint. There’s also no Travelogue Revolution with a chaser of lustful romance, as in Doctor Zhivago. Instead we see something understandable by anyone that can remember being uprooted from home and having to adjust to unfamiliar surroundings. Carlo Levi relates his own experience as a learned man dropped into a corner of his own country that feels more like an alien land. Even the Italian he hears is a different dialect. The title says it all — the area once known as Lucania is so off the beaten path of civilization that it’s said even Jesus didn’t make it quite that far.

Rosi’s four-part TV show would now be called a miniseries. It’s exquisitely filmed, capturing the feeling of a landscape frozen in time. Even in 1979 the film crew had little difficulty restoring a stone town on a hilltop to an earlier appearance that likely hadn’t changed for two hundred years. The film has less dialogue than one might think. The first hour is spent just getting to the town of exile and taking a look at where our hero will be living for an indefinite period. The combination of the strange land and Gian Maria Volontès thoughtful attitude is mesmerizing.

All we know at the outset of Christ Stopped at Eboli is that Carlo Levi, played by the middle-aged Gian Maria Volontè, is being escorted to ‘internal exile’ in a town so remote that there’s no civic transportation for the last leg of the journey. He discovers what at first seems a social disaster zone, a place with just a couple of incompetent doctors and no pharmacy, overrun by malaria but also easily controlled sicknesses. Levi has a medical degree but has never practiced, preferring a life of painting. He finds himself compelled to do what he can. The few official jobs in town are jealously guarded, as with the mayor Don Luigi (Paolo Bonacelli), who spouts patria slogans but holds the peasant population in contempt. He’s more concerned with looking good with his superiors than doing anything about the local dysfunction. 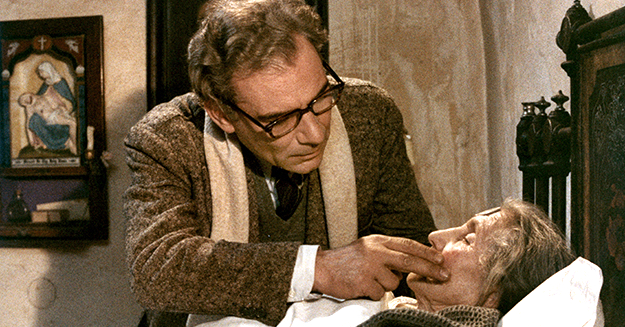 The worldly Carlo Levi studied in Paris but discovers he knows nothing about the neglected margins of his own homeland. There is little modern plumbing. The mail is brought in on a mule. Everybody knows everybody else’s business — there are few political, personal or marital secrets. Everybody hates everybody, starting with a tax collector who simply seizes valuables not nailed down. A man says that he’s slaughtering all his goats to keep them from being taxed. Levi meets the Baron (Alain Cuny), a landowner who provides nothing and comes by only to collect his rent. The man believes himself endowed with religious powers.

Levi discovers that the locals aren’t particularly Catholic, as they associate Rome and the Pope as foreign occupiers that demand tribute and soldiers for their wars. The peasants also maintain enough superstitions to form a pre-Christian pagan belief system. Not even the church gives much thought to the region — the local priest was assigned there mainly as a punishment. Father Traiella (François Simon) hates his congregation almost as much as they hate him. Children pelt him with rocks.

Carlo Levi is polite and thoughtful in all things, and careful not to give offense. He must check in every day at the mayor’s office. Policemen monitor his movements, tell him not to talk too much to others and by all means to have no contact with the ten or so other political prisoners quartered in various places around town. Levi is eventually visited by his sister Luisa (Lea Massari of L’Avventura) who can’t understand his attraction to this new Italy they never knew existed. She’s a doctor too, and is equally appalled by the conditions she finds.

Carlo stays clear of his political co-exiles. One of whom has apparently been punished for being caught with a communist poster from overseas. This makes us think that Carlo may have been convicted for a single remark, or was simply denounced by a Fascist who didn’t like his face. The mayor warns the multi-lingual scholar not to read books written in a suspicious foreign language. None of the things occur that we expect in a normal drama. Although he does throw a sort of ‘painting party’ for the local children, Levi doesn’t start a school or attempt to elevate anybody’s consciousness. He doesn’t run a secret printing press or play Spartacus and plot against Mussolini. We never hear him voice his politics to anyone. 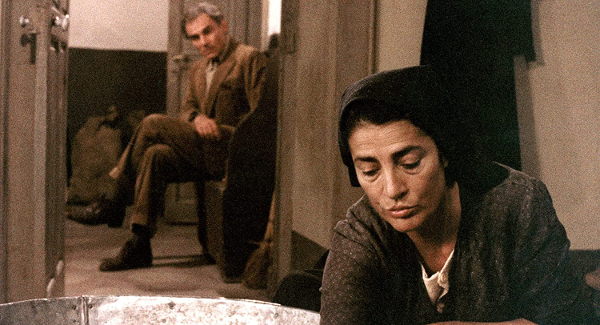 The big surprise is that the film has no romantic element… and it isn’t missed. No needy, lustful Julie Christie emerges from the peasants to share confidences with Levi, in or out of bed. The local custom is that unmarried men can’t be alone with women for any reason. But a ‘safe’ cleaning woman for Levi is found in Giulia Venere (Irene Papas), a strong-willed single mother whose superstitious beliefs constantly astound Levi. The film’s only vaguely sexual situation occurs when the aggressive Giulia insists on personally washing Levi in his bathtub — she’d never admit that she’s enjoying this man she only grudgingly called ‘good looking.’

Christ Stopped at Eboli is instead an interior meditation. Carlo Levi walks, observes, and learns within the confines of where the police will let him roam. People accept him because he doesn’t impose his ideas on them; at one point he’s bombarded with mothers wanting medical attention for their children. Levi learns that many of the men have gone to and returned from America; it seems a pattern for young husbands to give their wives children and then simply disappear. Mussolini is invading Ethiopia, and Levi must sit quietly as the mayor tries to drum up a patriotic fervor.

Every scene introduces something unexpected, like a vendor who shows up calling out to one and all, ‘bring your pigs to be castrated!’  In a scene not for the faint at heart, the practitioner performs ad hoc internal pig surgery better than anything performed on people for a hundred miles around. 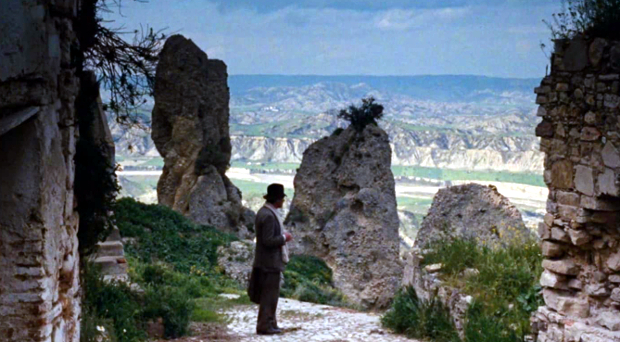 Saying that the movie’s locale is important makes Christ Stopped at Eboli sound like a travelogue when it’s not. But Pasqualino De Santis’ beautiful cinematography captures the area in all weather conditions, making the hilltop town and the rugged landscape seem like a cultural Lost World. Our identification with Carlo Levi is so complete that we grow affection for the people of Lucania as well, despite the backwardness and ignorance. Once Levi has their trust, their bond with him is greater than that for their leaders, the law, or the country. We worry, wondering if that will prove to be a serious problem for him. I can’t offer spoilers, but look out for the beneficial effect of the mayor’s impatient, disapproving wife.

Gian Maria Volontè serves as a strong identification figure. His Carlo Levi never pleads for sympathy, acts superior to anybody or loses his patience with the patronizing, pompous mayor. Weirdly, actor Paolo Bonacelli had starred four years earlier as a totally depraved Fascist in Pasolini’s abhorrent but honest Salo. Lea Massari and Irene Papas put in strong appearances, and François Simon’s erratic priest remains sympathetic too, even though we know he was banished to these hinterlands for too-familiar moral crimes.

What an appropriate time it is to discover this particular film. Pandemic lockdown feels a bit like an ‘internal exile,’ especially when our own political events seem to be spinning in the direction of Italy circa 1935. Carlo Levi is neither rebellious nor apathetic to his situation, but simply goes forward in the best way he can. Perhaps he was fortunate that Fascist fanaticism hadn’t reached its peak in 1935, as his punishment seems halfway benign. I assume that opposition figures that directly challenged Mussolini paid far more dearly for their politics.

I was moved by Francesco Rosi’s earlier great pictures, even with their complexities and historical references — Salvatore Giuliano, Hands Over the City, even his unflinching look at bullfighting in the bloody The Moment of Truth. I hope we get to see much more of his work; this fine film is the most emotionally rewarding Rosi picture I’ve seen so far.

The Criterion Collection’s Blu-ray of Christ Stopped at Eboli is an immaculate new restoration of this carefully filmed, beautiful show. The color is rich and deep, etching the many peasant faces on view as well as the contrast between parched earth, fertile fields and the ancient town of stone. In scene after scene we become aware of a specific place with specific weather conditions. The only thing the images can’t convey is the temperature. Judging by the way Levi wraps up and how the Baron throws his coat over his bed, this place must get plenty cold at times.

I associate composer Piero Piccioni with bouncy hip scores like that for The Tenth Victim and The Witches; here his contribution is a calming, somber composition that establishes a contemplative mood. It supports the story’s structure,  a flashback recalled by the aged Carlo Levi. 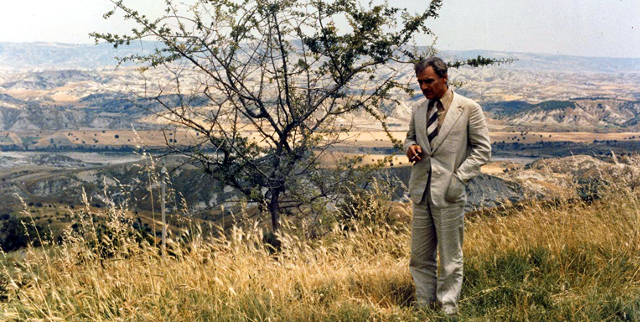 The extras are informative and frequently inspiring. The duty of providing an overview for the show falls to Michael F. Moore, a translator and subtitle expert who worked with director Rosi. Moore explains a lot of context we might miss, such as the continuing cultural division between the two halves of Italy. The South was for a long time controlled by foreign powers, especially Spain. At one point we hear a wailing Lucanian song that sounds a lot like Spanish folk singing. The ‘brigand’ heritage that the locals are so proud of was basically resistance to economic oppression; we’re told that it formed the basis of The Mafia.

We also get a fine 1974 double interview, a lively, affectionate discussion with Rosi and his mentor Levi. Francesco Rosi is the subject of an in-close 2014 interview about his collaborator Gian Maria Volontè, that’s simply excellent. The folding insert contains a lengthy essay by Alexander Stille, and a statement from the director.