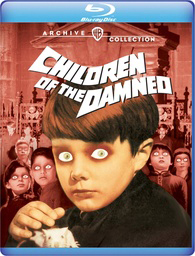 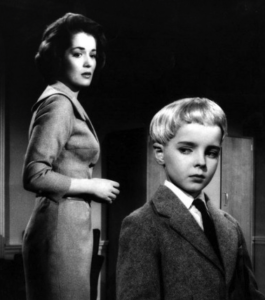 Wolf Rilla’s Village of the Damned was an alien invasion thriller that was genuinely invasive—all around the world women of child-bearing age are suddenly and mysteriously pregnant. No matter the circumstances, whether a virgin or a lonely widow, they wake from a deep sleep to find themselves in a family way. Who or what is responsible is never determined and the results are devastating—marriages shattered, young lives ruined, reputations damaged beyond repair. Strong stuff for 1960 and Rilla didn’t shy away from the moral, not to mention awkward, implications of the situation. The otherworldly offspring grow up to be intellectual powerhouses with a talent for telekinesis and mind control—they’re defeated, irony of ironies, by an equally intelligent adversary who destroys them by simply not thinking at all. 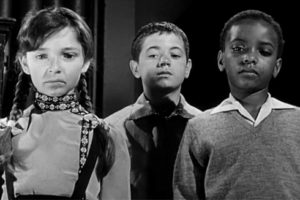 Rilla’s film went places most science fiction films didn’t know existed, this was an assault on the very nature of the family and the atmosphere was far more unsettling than a mere flying saucer plopping down on your roof. The ending was ambiguous enough—the demonic children appear to perish but the image of their spellbinding eyes rising out of the flames opened the door for a return engagement. A few years later, Children of the Damned arrived in theaters. Directed by Anton Leader and written by John Briley, the general assumption is that this 1964 horror show is a sequel to Rilla’s film. But apart from the spookily self-possessed youngsters, Children of the Damned pretends that Village never happened—it’s a self-contained shocker that takes a kindler, gentler approach to the kids though the little monsters are no less deadly. 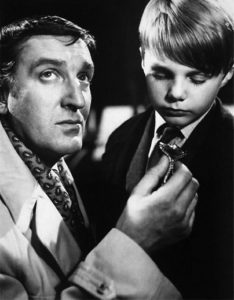 So deadly that the mother of tiny Paul Looran, a near mute but supernaturally gifted child, is determined to see the tyke dead. Paul, naturally, has other ideas. Ian Hendry plays a stolid psychologist named Tom Lewellin, in league with a wisecracking geneticist named David Neville (played by Alan Badel). The duo studies Paul’s remarkable achievements and discover that the little boy is not alone, there are five other prodigies scattered around the globe including the po-faced Rashid from India, cherubic Mi Ling from China, and the solemn Aga from Africa. They’re a taciturn bunch and they all have, as the movie’s posters suggest, “the eyes that paralyze”—the cryptic nature of their visit to our small planet is what drives Briley’s story. 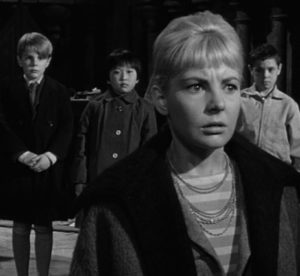 The children have been brought together in a London observatory for safekeeping—whether its for their safety or ours is a lingering question. It’s during their interrogation of Paul’s mother—now bedridden in a local hospital thanks to Paul’s lethal mind control skills—that Lewellin and Neville begin to understand the perilous potential of the adolescents. Colin Webster, a military man played by Alfred Burke, is intrigued as well and he plots to move the children to a government base for a different kind of study; the children’s uncanny powers could prove valuable to England’s offensive capabilities. With the army and the scientists bearing down on them, the kids take sanctuary in an abandoned church where Paul’s aunt, played by Barbara Ferris, acts as an unwilling, and hypnotized, go-between for the kids and the authorities.

The children set up shop on the chapel’s broken altar for an unambiguously ominous experiment, piecing together the church’s cracked stained glass and broken ornaments to devise a deadly ray gun—icons of good used for the devil’s work. After a few suspenseful sequences set inside the derelict cathedral—it already looks war-torn—the films devolves into confused spasms of violence and hare-brained irony (the world nearly ends thanks to a dropped screwdriver.) 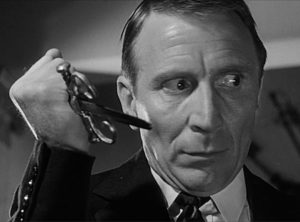 The film harps on the children’s purpose, why are they here, what do they want, but it’s never satisfactorily resolved; one moment the kids are vicious tyrants, the next misunderstood peaceniks. It’s just fuzzy storytelling—as the man who saved the day in Village of the Damned, George Sanders knew how important it is to stay focused.

Definitely in focus is cinematographer David Boulton’s superior work (it paid off, his next film was Robert Wise’s The Haunting.) Warner Archive’s new Blu ray shows off Boulton’s work to great effect, it has the starkly beautiful look of Conrad Hall’s work on The Outer Limits. Extras include the film’s trailer and a feature length archival commentary from the late screenwriter Briley—whose most famous accomplishment had to be 1982’s Ghandi.