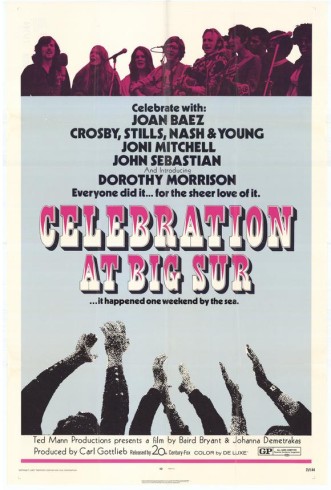 Numerous hairy guys and braless gals groove to the sounds of Joan Baez, Crosby Stills Nash and Young (with Taylor and Reeves), Joni Mitchell, Dorothy Morrison and the Combs Sisters, John Sebastian and a few lesser luminaries in this filmed record of a 1969 rock concert held at the seaside grounds of Esalen Institute. One of the lesser entries in the field, CELEBRATION AT BIG SUR boasts a rather limited star roster and entertainment values of similar modesty. The 20th Century‑Fox pickup will serve as a moderately useful youth market attraction where doubled with a strong co‑feature. With the volume turned up to ear-piercing levels, some of its higher‑flying viewers might find CELEBRATION almost as much fun as WOODSTOCK, but the feeling persists that filmmakers Baird Bryant and Joanno Demetrakas didn’t extract the most from the event; that there must have been something more interesting going on than their cameramen captured on film.

It’s simply the same old stuff, with accompanying pretty visuals: butterflies, fuzzy‑focus flowers, flaxen‑haired kiddies and undulating teenyboppers, plus a few color key effects, most of which are surprisingly ugly. There are a couple of half-hearted interviews with the fans, but nobody has much to say. Everybody gets excited when a whale is glimpsed in the Pacific, but the filmmakers didn’t catch it. At one point, a brief scuffle breaks out, quickly subdued via good vibes, which prompts David Crosby to make this memorable observation: “We gotta all be ’cause it’s gotta all be however it’s gonna.” Or something. The photography, blown up from 16mm, is mediocre, the sound recording just fair and the performers themselves are hardly at their best. Some bare breasts appear in a communal bathing sequence, but for the most part the film gets around the problem by freeze‑framing before it’s too late.