Here’s an Army booster production that got way out of hand: it’s a semi-docu using real soldiers, and filmed in Korea near the real combat zones – and filmed in full-scale 3-D. The soldiers, the equipment, everything is real — even the ammunition used is live, not blanks. 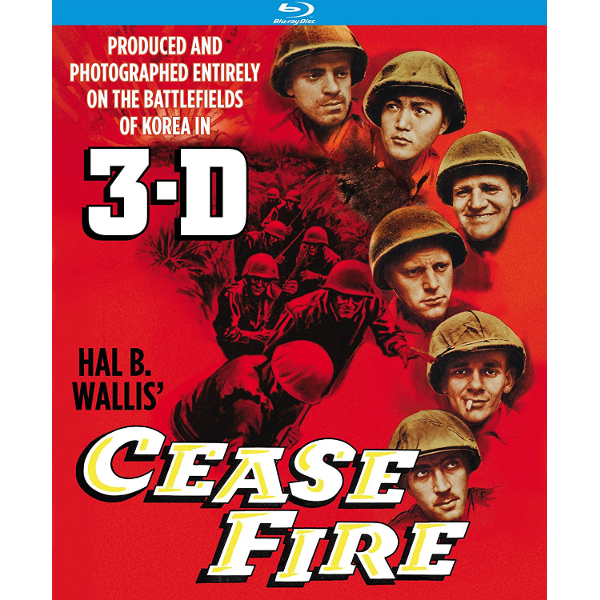 The Korean Police Action was a tough sell to the American public, which was all for holding the line against Red aggression as long as somebody else’s son did the fighting. The duty was performed by service regulars and draftees. The 1948 desegregation of all the armed service had been promoted as a move for equality, but it mostly opened up conscription to a much wider pool of young men.

Not knowing how to help promote such an amorphous war, the studios instead made movies about WW2. One of the first pictures set in Korea (Samuel Fuller’s The Steel Helmet) was so honest that the Pentagon would have liked to shut it down, but it was an independent production and out of reach. After hostilities ended with a cease-fire in 1953, serious dramas about the war either stressed its futility (The Bridges at Toko-Ri) or took the attitude that our forces were betrayed by pacifists (One Minute to Zero). Writer-Producer Owen Crump had Signal Corps experience and had run a film unit in WW2. When the Defense Department liked a short Crump had made about Korea, he got the opportunity to pitch the idea for Cease Fire!   Crump proposed a ‘you are there’ documentary to be filmed on and near the front lines in Korea. Finding support with producer Hal B. Wallis, a screenplay was written and a ‘guerilla’ camera crew was assembled. Adding to the drama and ensuring broader news coverage, Paramount announced that Cease Fire! would be filmed in the cumbersome 3-D process. On the surface this sounds absurd. Daring war cameramen captured amazing footage from the front lines, but they acted independently and carried small wind-up cameras. 3-D was a cumbersome process that required the full attention of a specialized camera crew, just to get a useable shot.

But it really happened. Filming began in May of 1953, when combat was still in progress. The full article by Ted Okuda at the 3-D Film Archive tells the story of the shoot, with plenty of images.

The armistice agreement was signed in late July, when Cease Fire! was still filming. The story covers a simple patrol on the last official day of the war. Orders to withdraw are reversed for one small platoon, which is sent out to check on enemy activity. It’s a realistic hike in hazardous territory. The platoon must navigate a minefield, and they come across a New Zealand UN trooper who has a wounded buddy to be evacuated. He shows them a little further on up the trail. They eventually reach a hill from where they can see hundreds of enemy troops advancing. They relay this info back to base, just as they encounter a sizable contingent of Red troops.

Cease Fire! comes off as a real war propaganda problem picture. With no literary source or true event to cover, it’s neither a structured drama nor a believable documentary. The soldiers we see are all real troops taken from service for the shooting; all perform well considering the circumstances. The officers are serious and on task, and the troops all are positive thinkers. We meet no ‘Please Mr. Custer‘ types likely to get emotional over a butterfly in a foxhole. A black soldier is given some weak dialect lines to speak, but is shown up front and fighting with the rest of the troops. The one fictional fillip is the story of the Korean member of the platoon. His language skills make him especially useful, yet he’s reprimanded for talking to an ancient, white-bearded farmer. The old guy is then shown running through fields to a nearby hamlet — to perhaps report to the commies?

No, everything about the picture seems touched by Army committees. Expect no betrayal from the grateful South Koreans. There’s no conflict in the platoon, only a determination to strike the enemy. When the massive enemy troop movement is spotted (in daylight!), the chain of command functions as it should, directing mortars, tanks and air strikes to neatly wipe out the opposing force. Cease Fire! may have begun as a story of an ordinary day on the front, but it turns into a little mini-epic of valor and meaningful victory, with a very atypical tidy finish. At the level of the platoon, the realism is quite good. The film was shot not far from the front, and the men, equipment and weaponry we see is authentic. I would assume that a filming site would be chosen that had never seen action or been occupied by the enemy, so as to not lose anybody through accidents with unexploded bombs or enemy mines. But no blank ammunition was used in the battle scenes, a scary thought indeed. Using blanks only works on a film shoot when nobody has live ammo — under these circumstances it was surely safer to have live rounds and just be damned careful. There are no wide action shots with people firing at each other, anyway, although the editor manages to give the action a good war-movie polish.

Cease Fire! looks and feels like a standard war movie, not some crazy experiment from a real war front. It’s given a very good music score by Dimitri Tiomkin, which further turns us toward genre conventions. The score even make use of a song, ‘We Are Brothers In Arms’. After Tiomkin’s song for High Noon became a huge hit, the filmmakers were perhaps hoping for a Top-40 radio tie-in to boost publicity.

Setups and coverage (of the storyline scenes) are filmed as normal coverage. As most of the scenery is nondescript scrubland gulleys and hills, there’s no sense of geography to what’s filmed, either. If they were smart, they found an untouched area with good topography in several directions, and shot most of what we see in the same couple of acres. The 3-D Film Archive page shows the 3-D camera mounted on a tank-like personnel carrier. That might be good for wide shots, but they had to bring it down for most of the dialogue scenes and close-up coverage. The article says that the film was re-written and edited in August, presumably to work the real cease-fire into the proceedings. It also says that the scenes of the reporters bickering at the Panmunjom peace talks were altered at this time. Bosley Crowther’s review in the New York Times is iffy on the picture but positive on a movie more or less made to order for the Pentagon — until he describes the Panmunjom scenes and says that, “the footage was taken over by Hal Wallis for a Paramount release.” Taken over? Wallis is the nominal producer. Crowther also repeated that the censors removed “three ‘hells’ and a ‘damn'” from the soundtrack, and prides himself on pointing out the irony.

The entire drama with the patrol is post-dubbed. This may have been planned from the beginning, not only because capturing sync sound was difficult, but because the non-actors’ line deliveries could be re-done and improved. I’d imagine that some new dialogue referencing the armistice could simply be imposed over other lines. What isn’t explained is that there’s quite a bit of non-3-D footage in the show. Scenes of officials arriving at the Panmunjom conference tents are clearly hand-held news film, and flat. The movie then cuts to a tent on a sound stage, where two news correspondents offer differing views of the same notion that War is Hell.

But the 3-D overall is quite good. I’m not sure it imparts a ‘you are there’ realism to the combat scenes but it is impressive to see all this authentic ‘costuming’ and gear in action — tanks rumbling around, real mortars firing, startlingly close shots of Navy jets catapulting off the decks of an aircraft carrier. And it is different when one is aware that the grenades hanging from the soldiers’ jackets, are live, 100% real.

The 3-D Film Archive article tells the story of the film’s multiple premieres and overall reception. General Mark Clark officiated at several premieres; he appears in a well-filmed prologue, addressing the camera. It’s short, which is good; Clark comes off well by comparison with similar intros in other pictures where real commanders address the camera.

KL Studio Classics’ 3-D Blu-ray of Cease Fire is a beautiful encoding of a picture that became obscure not long after its first release — it’s not only not been seen in 3-D, we’re told that is was hardly shown at all and didn’t find a TV showing until 1998. I saw it in 2007 or so at one of the 3-D Festivals at the Egyptian. This disc looks better, in its correct widescreen aspect ratio and with all of the 3-D parameters tweaked for the (excellent) Blu-ray 3-D format. The 3-D Film Archive also resurrected and restored the film’s original three-channel stereophonic soundtrack, which showcases Dimitri Tiomkin’s score. Original prints for Paramount’s The War of the Worlds, also released in 1953, were in 3-channel stereo too, but they’ve reportedly been lost.

The extra is outtakes of General Mark Clark’s introduction prologues — I don’t see him making any mistakes. An extra indicating Ted Okuda’s essay simply sends the viewer to the web. The trailer rounds out the package. One last thing I’d like to mention is the film’s Paramount Logo — it’s a real beauty with the mountain and the stars — in dynamic 3-D.