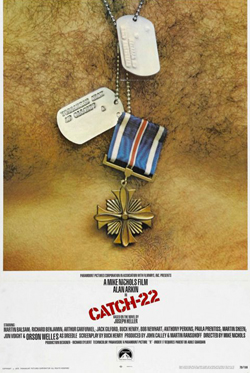 Widely considered a disaster at the time, Mike Nichols’ elaborate film version of Joseph Heller’s absurdist anti-war novel has since recaptured a bit of cult heat. Heller himself was enthusiastic about Buck Henry’s adaptation of his complex work. The four-month shoot (in San Carlos, Mexico on a specially constructed air base) was reportedly a tense and difficult affair, but the result is a trenchant satire whose sophistication eluded audiences who preferred their anti-war hijinks in the broader style of Altman’s M*A*S*H, released the same year. Orson Welles, who plays General Dreedle, had hoped to film the novel but was unable to secure the rights.