Dario Argento’s second murder whodunnit is less stylized but almost as enjoyable as his first, Bird with the Crystal Plumage. Reporter James Franciscus and blind ex-detective Karl Malden investigate killings at a fancy genetics institute, but everyone they interview turns up dead. Catherine Spaak is among the suspects in a crime spree with nine clues but no easy solution. Turin locations, a glossy widescreen image and Argento’s polished direction are the draw, along with some fine music cues by Ennio Morricone — who in 1971 scored 24 separate features! 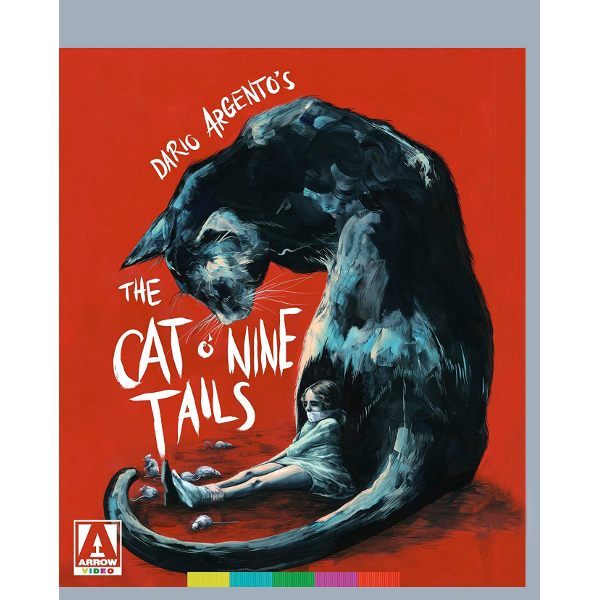 Based strictly on fan appreciation, Dario Argento is probably the most popular EuroHorror director. Atypically for the genre, his films enjoyed wide theatrical releases in America, even if they were sometimes heavily abridged. Argento fully developed the ‘killing machine’ wing of giallo horror begun by Mario Bava, and his ’70s films are the slickest of the bunch. His second effort The Cat O’ Nine Tails is much more of a straight murder mystery than horror film, a more intricately plotted pot-boiler than his The Bird With the Crystal Plumage. Minus a few seconds of rougher violence, it might almost be suitable for ’70s television.

A string of grisly murders around a research institute gets reporter Carlo Giordani (James Franciscus) jugular-deep in trouble. Who is masterminding the killings, and why? Puzzle composer Franco Arnò (Karl Malden) is blind now, but was a detective when he had his sight. Are the clues he provides too good to be true? The daughter of the head of the institute (Catherine Spaak) soon becomes involved with Carlo. Could either be playing a role in the slayings?

Euro Horror is about style, and Dario Argento certainly initiated one of his own. Unlike the majority of his contemporaries he has the benefit of fine production values. The Cat O’ Nine Tails is beautifully photographed and has a fine Ennio Morricone score. Two name American stars top-line the cast. Argento would later earn the accolades of film critics by dropping the mechanical murder-mystery trappings of his ‘animal’ trilogy (Bird, Cat and Four Flies on Grey Velvet) and aiming for the purely macabre. He also dropped the strictures of a formal plotline. His later shows, especially Suspiria, are appropriately dreamlike and ‘delirious,’ even as they make less and less sense.

Cat has the structure of an ordinary murder mystery. Yes, the string of red herrings isn’t going to impress Agatha Christie fans. The killings are puzzling but the elements predictable, such as the photographer that is killed just before he can turn over crucial negatives. We get a sidebar trip to a gay bar and a jealous gay relationship that pads things out, just as does a very good car chase through Turin. The mystery photo that reveals a hand pushing a man in front of a train, puts the film on a momentary detour into Blow-Up territory. It’s actually a fairly stale formula: every time the camera cuts to a minor character doing something alone, we can pretty much tell that an unseen assailant will intervene. Argento uses a great deal of subjective camera from the killer’s POV. The formula is now so well established that a single cutaway to an unknown person’s subjective viewpoint person is that is needed to clue the audience that a murderer or voyeur is present.

Argento’s suspense style withholds information rather than provides it, making him another Hitchcock imitator who has little in common with the master. The frequent subjective shots of corridors being stalked show off some very polished camerawork, providing tense padding while concealing the identity of the killer. Classic Hitchcock subjective-objective technique alternates angles on the person doing the stalking, causing an identification effect. Argento’s cold ‘killer POV’ puts us in sort of a dream state, cruising in the dark for ‘our’ next victim. It has some psychological merit in that it mirrors the recollections of real killers in denial abou their personal agency in their crimes: “My role was passive. I didn’t do it, it just happened.”

The film has great appeal for fans of murder whodunnits. The Turin locations are attractive, but it is Argento and his craftsmen that select and create truly impressive interiors for the genetic institute and its owner’s home. Cool and sleek in tone, the ‘feel’ of this Argento evokes glossy Italian design and fashion magazines. The architecture of Cat isn’t as stylized as the glass cages in Bird with the Crystal Plumage, but it still supplies a lush, tactile presence not found in most U.S. studio pictures.

Cat also isn’t quite the string of violent setpieces one might expect from Argento. The Hardy Encyclopedia of Horror doesn’t even list this title. A slaying on a train platform has some jarring shock cuts of a body tumbling along the track, but from then on the killings become secondary to the assembly of a complex puzzle. They can get brutal, but there are no grotesque gimmicks, no giant jagged statuaries falling on people or witnesses trapped in glass cages. Argento downplays the gore in this feature, but it shows him at his least affected. Even the unwelcome subplot with a small girl threatened by a killer shows restraint.

The cast plays the story straight and serious. Can’t-get-arrested-in-Hollywood James Franciscus, a reasonable actor who soon drifted away from respectable parts, carries the film well and is definitely not slumming. The surprise is Oscar winner Karl Malden, also at a career low. Between classy Kazans and television security, he either took this job for the vacation in Italy, or perhaps because he was attracted to this quirky blind character Arnò. Malden doesn’t short-change the producer either — the show sets off in a good direction, showing Malden’s ex-detective Arnò creating crossword puzzles with an interesting set of braille building blocks. ‘I like solving puzzles’, he says, while we’re thinking that computers must have put a lot of puzzle makers out of business.

We remember Catherine Spaak well from her part opposite Rod Taylor in Richard Quine’s Hotel from a few years before. She’s also quite good in Dino Risi’s Il sorpasso. The rest of cast provide character turns in colorful parts (what seems to pass for narrative interest with screenwriter Dardano Sacchetti).

If you enjoy the Argento brand of terror, you’ll likely find the more restrained The Cat ‘O Nine Tails an excellent showcase for his basic directing skills. The title, by the way, is Carlo and Franco’s way of describing the nine clues they have, none of which they have solved. But the show will be catnip time for Argento-ites.

Arrow Video USA’s Blu-ray of The Cat O’ Nine Tails is a beautiful presentation. Arrow’s details tout a new 4K restoration from the original camera negative and the show comes with original Italian and English soundtracks and subtitles. Cat was severely cut for America and the theatrical print I saw around 1975 was not a thing of beauty. I’m sure that there have been many video releases in the interim, but I remember the old Anchor Bay discs from the early DVD boom, when the uncut sex and violence of slick Euro-horror was the rage among college kids. Sourced so close to the original negative, these new scans likely look much better than anything but an answer print right out of the lab. The usual Techniscope granularity is not in evidence. A couple of sources list the anamorphic ‘Cromoscope’ lens as well, but the visual field is very flat, as if a prime lens were in use… during pans, the screen does not ‘warp’ as with many anamorphic systems.

New interviews give us face time with the director, his writer, the production manager and Cinzia de Carolis, who plays the little girl Lori (very well). A new feature illustrates the script for an unused extended ending. The new artwork by Candice Trip is really attractive, and Arrow also supplies a reverse side with an original release illustration.