The dirty book of the ’60s became an all-star dirty movie with Brando, Burton, Starr, Coburn, Matthau, Astin, Aznavour and Huston all wanting a taste of the Swedish nymphet Ewa Aulin. Camerawork by Rotunno, designs by Dean Tavoularis, effects by Doug Trumbull — and the best material is Marlon Brando making goofy faces as a sub-Sellers Indian guru. 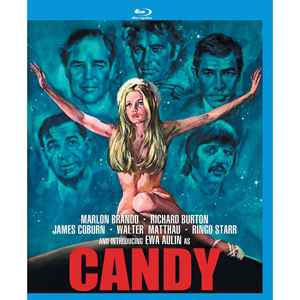 This crazy synopsis is totally optional: a shimmering light descends from outer space and coalesces into the form of nubile, innocent teenager Candy Christian (Ewa Aulin), who attends the high school where her uptight teacher-father (John Astin) works. Quickly captivating every male in sight, Candy undertakes a randy Pilgrim’s Progress through a succession of oversexed father figures, including her father’s twin brother Jack (also John Astin). Rogue poet McPhisto (Richard Burton) takes her from school, and she’s soon assaulted by Emmanuel, a gardener (Ringo Starr). Escaping from Emmanuel’s protective sisters, Candy and her injured father join rabid General Smight (Walter Matthau) in the back of his perpetually-aloft troop plane, where Smight naturally propositions Candy for some airborne R&R. In New York, father becomes the special guest patient of superstar brain surgeon Dr. Krankheit (James Coburn), who saves his life by affixing an electrical plug to the back of his head. After Krankheit takes Candy in a side room, the doctor’s nurses chase her from the hospital, where she spends a wild night with a weird hunchbacked vagrant, (Charles Aznavour) before hitching a ride in the semi-truck / sacred shrine run by guru Grindl (Marlon Brando). The levitating lama initiates Candy into a search for enlightenment through (of course) sex. The truck deposits Candy in the western desert, where she meets the ultimate guru Grindl has foretold. She follows him underground, to surface in a self-destructing Indian temple in the middle of Hollywood. Discovering the identity of the ultimate, final wise man, Candy continues her strange odyssey, returning to outer space as floating energy.

“Vision of an untapped grace, walking gaily in the sand ..”The big sell on Candy in 1968 was the idea that the ‘un-filmable’ sexed-up novel by Terry Southern had indeed been turned into the hottest film ever made, an all-star comedy crossed with a stag reel. Described as being loosely adapted from Voltaire’s Candide, whatever topical brilliance the book possesses definitely got lost in the Buck Henry adaptation. What’s left is a pack of stale sex jokes enlivened here and there by spirited performances. It’s an expensive dirty joke for dirty old men, about the elaborate deflowering of a (presumably) under-aged girl. Ewa Aulin’s pouting, willing, wet dream of a heroine most reminds us of Harvey Kurtzman’s Little Annie Fanny, a cartoon from Playboy magazine. Yes, Candy has come to liberate the uptight world from the stranglehold of sexual repression. But any potential satire on godlike doctors, military men, writers and religious gurus quickly drowns in a flood of smarminess that isn’t clever enough to rise above the level of Smut, 2nd class. Back in 1970, when Savant saw the film, it didn’t seem to cohere enough to encourage a second thought.

Southern and Henry’s world now seems to revolve around power-mad paternal figures that figuratively and literally want to rape their own daughters. This undigested insight is unsupported by the semi-virginal baby-doll ‘innocence’ of Candy, who is presented as a spirit far above the obscene desires of men, not necessarily an alien, but something like a pagan God. The few other females in the story are either wanton libertines (Elsa Martinelli’s Livia) or vicious animal-like creatures that attack Candy, guarding their various men like landlords. There is not much room left over for profundity of any stripe. 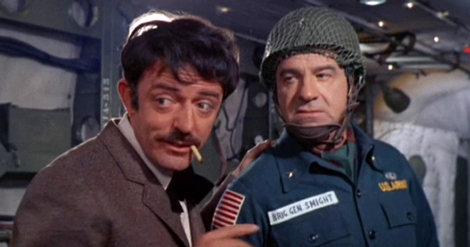 A lavish European production that did some location shooting in the states, Candy has that weird continental awkwardness that results when furriners try to stage New York scenes in Rome. A look at the key production credits above shows the caliber of talent that labored on this movie. Christian Marquand’s direction is technically adept yet fairly haphazard, possibly aggravated by the necessity of aligning everything to the schedules of the big star talent. The lack of inspiration throughout becomes even more evident at the finale. It’s a dismal imitation of a Fellini film, a self-conscious circus-like revisiting of all the characters as they romp together on a hill. Candy wanders through this mess on her way back ‘to the stars.’ The camera crew is even seen in a mirror, while the “can I go home yet” movie stars go through their schtick as part of a forced ‘happening.’ Marlon Brando looks particularly lost, hoisted into the air Peter-Pan style on wires while mugging for the camera. It’s a setup more appropriate for Lucille Ball than the King of method acting.

Other actors don’t fare as well. Richard Burton’s sellout poet has noisy sex with a mannequin, which must be the nadir moment of his later career. At least Ringo Starr makes it with cupcake Ewa Aulin in person (or her stand-in, complete with vaccination scar on her hip). But his horrible Mexican accent makes us wish the whole scene would just go away. Walter Matthau’s Buck Turgidson imitation isn’t very interesting either, and Charles Aznavour makes no impact at all. John Astin carries a lot of the show but relies a bit too much on his stock set of Gomez Addams wild-eyed stares.

As Candy, Swedish model Ewa Aulin does a good wide-eyed innocent act, considering that it goes on for two hours without becoming trying. She looks great, but the character doesn’t develop beyond a concept. As a sex object, even Jane Fonda’s Barbarella has more personality. The presence of Marilù Tolo, Anita Pallenberg and Elsa Martinelli prove that the producers had access to top European female talent. Yet these actresses are given little to do, or are stuck being as unconvincingly Mexican as Ringo.

I didn’t see Candy new, but was made curious by a school friend’s description of a scene where James Coburn pulls his finger out of a human brain (that finger) with a big grin of achievement at having so thoroughly f_____ his patient. I couldn’t imagine how such a scene could be integrated into a story. When I saw the show two years later at the old Picwood on Pico Blvd., I found out that nothing was integrated into anything in the movie. The sex on view is limited to some fleeting nudity, a few suggestive poses and a lot of foreplay. But it was plenty hot in 1968, just when the Production Code was biting the dust, before the explosion of the porn industry. After the critics eviscerated Candy the main audience for its first run was reportedly men in raincoats, who could have seen better sex in things like The Magic Garden of Stanley Sweetheart playing down the street. Just about everyone else was either turned off by the film’s desperate print ads, or the terrible reviews.

“Child of the Universe, giving freely of herself…”It says a lot for the hoped-for freedom of the big screen in 1968 that all of these stars would lend themselves to a ‘pornographic’ movie. This was the moment of Reflections in a Golden Eye, The Killing of Sister George and The Fox, before Easy Rider turned Hollywood upside down, resulting in the “we’re lost so give ’em tasteless sex” studio tactic of Myra Breckenridge and Beyond the Valley of the Dolls. Candy, like the equally vapid Barbarella, exists at the cusp where big budget Hollywood cinema might have become sexually adult, if anything like maturity had prevailed.

The KL Studio Classics Blu-ray of Candy is billed as a new transfer of this dubious relic of an insane time — which to me at age sixteen felt like ‘normal.’ The picture is quite good — a little light, perhaps, but always colorful, sharp and spotless. Watching Candy in this good transfer, its technical excellence becomes more evident. The timing between the moving, craning camera and the action on screen is very precise. I’m now also more appreciative of the talent involved:

The photography of Giuseppe Rotunno is colorful and the Dave Grusin rock score is actually rather nice in a commercial sort of way. The attractive opening and closing outer space visuals were provided by 2001 alumnus and psychedelic whiz-kid Douglas Trumbull, who later joked that he produced them as if measuring out fabric by the yard. Coming at the end of the show instead of the beginning, the titles are unusually modern — and bear a striking resemblance to the title sequence of Star Wars, made nine years later. For multi-level opticals, they’re really clean.

The Byrds’ celestial anthem “Child of the Universe” is woven through the instrumentals, and sung by The Byrds themselves over the ending titles and credits. The arrangement is much more elaborate than on the version on the group’s Dr. Byrds and Mr. Hyde album (which has another song written for the movie but not used in it, “Candy”.) To be honest, the memory of “Child of the Universe” is why I wanted to see the movie again. The basic song is underscored with horns and violins, in the George Martin sense, and is quite grand. 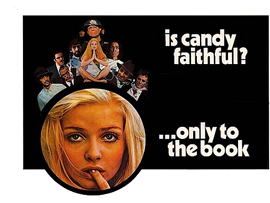 Kino has come up with some engaging extras. Putting writer-actor Buck Henry on camera is always a good idea, and producer Elijah Drenner caught him in a particularly open mood. Henry talks all about the movie, including a touchy topic or two. He says that actor-director Christian Marquand was a big operator in the French Resistance, which is news to me. While not actually defensive about the movie, he does apologize for it a little bit. His reason for taking the job was the prospect of several months in Rome working with some pretty exciting people, so I don’t know what excuses he needs to make. The interviewer of note is Gillian Wallace Horvat.

The other featurette is a rambling analysis from Kim Morgan, the engaging essayist and commentator. Her ideas are basically good but the editor frequently lets her go one statement too far, allowing her to contradict herself, or say the equivalent of, ‘whatever’ to her own opinion. Is spacey and unfocused good? Her button bite for the piece is, “Candy is hard to distill into one thing. That speaks well of it ’cause it makes it timeless.” Say what? Ms. Morgan writes an engaging blog, called Sunset Gun.

The package finishes off with two radio spots and a trailer. Candy does distill itself into one thing, and that is an image of a father having sex with his own daughter. Although by that time the movie has stopped functioning for so long that I’m not sure anybody noticed.

A minor movie but a major curiosity, Candy is nowhere near as bad as Savant thought it was going to be. It’s the proverbial car crash, but with a lot of color and variety to the wreckage. Kino’s polished presentation gives it every benefit of the doubt.