The irrepressible Robin Williams is Joey, a trash-talking Cadillac salesman with three women on the line, who becomes an involuntary hero when Tim Robbins smashes his motorcycle into the car showroom and threatens to kill everybody. Roger Donaldson’s crisis-farce black comedy is still funny — and my favorite Robin Williams feature. Perhaps Robin Williams’ biggest impact was through his cable TV comedy specials, teamed up with Whoopi Goldberg and others. An amazing natural humor machine, Williams could go all day giving forth an unending stream of hilarious improvisation funnier than anything a team of writers could come up with. His films were hit and miss, and like so many other comedians from his time (John Candy is the glaring example) the star vehicles he was given were often not good enough for him.

Although no box office champ, 1990’s Cadillac Man just happens to be one of Williams’ best. Working with a decent director and a funny script, Williams plays a believable character that has made a mess of his life by sheer nerve and recklessness. Loopy Tim Robbins’ hostage siege provides Joey with the opportunity to redeem himself, using that same nerve and recklessness. Ken Friedman’s script keeps the story up front — Williams isn’t forced to save scenes with extraneous comedy padding. Even better, Cadillac Man surrounds Williams with perfect supporting players and fun surprises in the bit parts. It’s not easy being a car salesman in New York, if you’re as fundamentally irresponsible as Joey O’Brien (Robin Williams). Joey is burning his candle at three ends at once, trying to keep up with his ex-wife Tina (Pamela Reed), his 20-something designer girlfriend Lila (Lori Petty) and his steadiest girl Joy (Fran Drescher), who happens to be married. The pressure is on for big Sunday sales at Turgeon Motors but Joey can’t seem to get his act together, what with the interruptions from the women in his life, including his mother (Mimi Cecchini). Three of his hoped-for customers show up at the same time, each demanding his full attention. Then the crazed Larry (Tim Robbins) crashes his motorcycle through the showroom window, brandishing a bomb and holding everyone hostage. Larry thinks his wife Donna (Annabella Sciorra) is running out on him with one of the salesmen, and he’s ready to shoot them all. In a flash of fast-talking desperation, Joey falsely confesses — and starts the slow, hilarious process of trying to talk some sense into the disoriented, trigger-happy Larry. For Orion Pictures, 1990 was the best of times and the worst of times. A prolific and creative studio, for the last few years their every hit was flanked by four expensive bombs. Navy Seals is a pandering and action-challenged combat flick, but the moody Texas noir The Hot Spot would have been a winner had it not been dulled by director Dennis Hopper’s bad editing decisions. Cher’s interesting star vehicle Mermaids was ruined by her insistence on making it a featherweight comedy. By the time these pictures were ready to go out, Orion ran out of money and was running up unpaid bills all over town. What would have been a surefire winner, The Addams Family, had to be sold to Paramount in a fire sale. And both Silence of the Lambs and Dances with Wolves were mortgaged so deep, there was no chance of profiting from them. Two best-picture Oscars came from this batch, and yet a year later Orion was way past the point of no return. It folded not much later.

I say all that because there’s no good reason why Cadillac Man couldn’t have been a hit. It is often drop-dead funny, Robin Williams was hot and Tim Robbins was on his way up. What constitutes fair game for outrageous black comedy changes all the time. Made long before today’s epidemic of mass shootings, the movie could use a hostage situation as a laugh-getter without being accused of terrible taste. The present state of the nation hasn’t done this show any favors — we see too many TV pictures of people running screaming out of buildings.

Taken on its own terms, Cadillac Man is still hilarious. The opening introduces elements suitable for a jokey revisit of Glengarry Glen Ross with worried salesmen pushing cars instead of houses. Some are quitting because the agency’s top performer Molly (Judith Hoag) will easily win the sales race by using her legs to attract the customers. Joey can barely pay attention to his work, what with the expensive upkeep on his fool’s harem. As promiscuous as he is sales-happy, he just doesn’t know how to stop chasing skirts. His mother is a cute nag who wants him to get back with his sensible wife (the always intelligent-looking Pamela Reed, of The Right Stuff). His girlfriend Lila (Lori Petty, later to become Tank Girl) is an emotional mess. She has terrible taste, and needs constant ego support. Joey’s adulterous girlfriend Joy (the always-funny Fran Drescher) has plans to snag Joey for herself, while retaining zillions in luxury money from her rich husband.

Having Tim Robbins invade the dealership at this point becomes an inspired plot point when it forces Joey to become an unlikely hero. He takes the rap for Donna’s infidelity, even though the real culprit, the son of the dealership owner, is right there in the room. Joey’s car-sales jollity and creeping insincerity work against his efforts to connect with a guy who might blow his head off at any moment. But he’s the closest thing among the hostages to a take-charge character. Joey takes the responsibility for someone else’s indiscretion, as if atoning for his own lousy judgment. This is why we like and care about him.

Joey O’Brien has an edge that’s missing from Robin Williams’ usual soggy nice guys. At heart he’s a pretty sleazy fellow who swears a blue streak and isn’t above making obscene suggestions to women. Joey sees a broken-down hearse at the head of a funeral procession as an instant sales opportunity — and after chatting up the funeral home owner, he goes after the widow as well. The furious widow is played by the formidable Elaine Stritch; it’s fun seeing her spar with Williams’ shameless Joey.

Roger Donaldson and his star Williams never let go of the serious side of the story, just for a cheap laugh. The humor may not be P.C., but it’s undeniably funny. The proprietress of the Chinese restaurant commandeered by the police is Helen (Lauren Tom), an ethnic powerhouse who shouts at everyone and leaves the entire Turgeon Motors table in stitches. She’s fall-down funny when she bursts from the crowd to shout a final bit of advice for Joey. Fran Drescher carries an annoying happy lap dog at all times. She scores the film’s single funniest bit when she shuts up the obnoxious dog by screaming louder than it can. This was the height of Tim Robbins’ screen popularity. He and Robin Williams play off one another quite well. They remain in character, as opposed to the anything-goes standup shenanigans of something like Good Morning, Vietnam. Plenty of negotiations take place on the phone, so some of the comedy is reminiscent of Bob Newhart monologues.

Broad but believable, and with an ending that’s not a downer, Cadillac Man is just a fun film that should have been a hit. For my money it’s one of Robin Williams’ best. 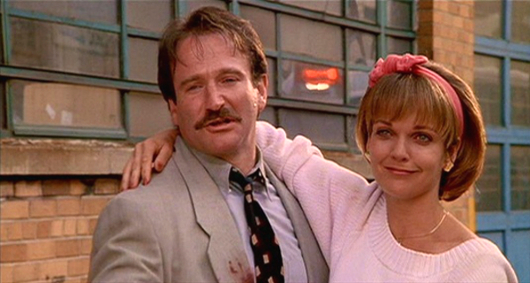 The KL Studio Classics Blu-ray of Cadillac Man is a quantum improvement on an indifferent MGM DVD from 2002. Before that there were only flat cable TV transfers, so this is the first time the show has been given a theatrical polish since it was on screens. Colors are vibrant and the proper screen shape focuses the action. The added detail of HD rejuvenates many of Donaldson’s image choices, like the forest of tombstones in the opening aerial shot that swoops over a graveyard to find the stalled funeral motorcade.

Kino has sprung for a great extra for Cadillac Man. Elijah Drenner hosts an audio commentary with Roger Donaldson, letting the director loose to tell all about the production. We learn more about the terrific cast; Donaldson’s comments about Elaine Stritch and Fran Drescher (and her dog!) are fun. He also gives us his views on Robin Williams, who of course invented extra lines on the set but didn’t deviate far from the script. Donaldson’s path from New Zealand nonfiction director to Hollywood make an interesting story . . . he credits Roger Ebert with his career, for calling attention to his early film Smash Palace at Cannes.

A trailer is included as well. Working at the post house where the trailer for Cadillac was cut, I learned quite a bit by watching the editor juggle action gags, Robin Williams zingers and voiceovers. It wasn’t easy isolating lines in the showroom chaos scenes, because everybody talks over everybody else. A bigger concern was deciding how much suggestive or vulgar language could be used, as everybody had a different idea as to which lines were acceptable and which weren’t.

Since Robin Williams’ passing I’ve noticed no rush to reappraise his film legacy. Has the disappointment of his apparent suicide created a sad atmosphere? When things were bad, Williams was always an entertainer we could count on for a morale boost. Cadillac Man is not one of Williams’ better-known pictures, but I like it more than some of the forced ‘serious’ shows he attempted. It’s too bad there was never a sequel to Popeye with a different approach: Williams’ impersonation of the Segar character was superb.