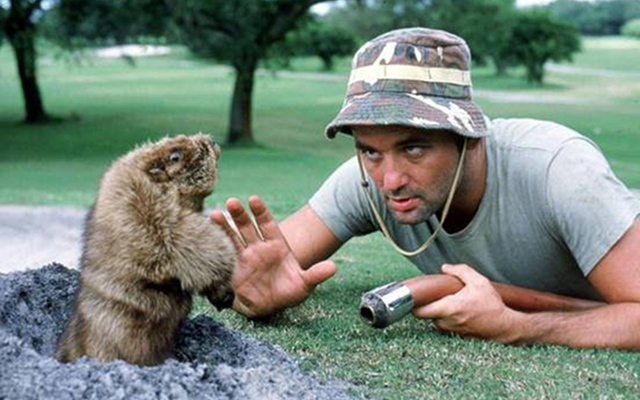 Golfers love “Caddyshack,” too.  Even non-golfers love “Caddyshack,” but let’s stay on the course.  I was a golfer myself, once upon a time.  I found that the “good walk spoilt” sentiment from Samuel Clemens was too true for me to continue.  Reaching into the cooler on the golf cart was a lot more fun than reaching into my bag for a club.  I tried carrying my bag, but if I’m to enjoy a walk in the grass, I don’t need a hundred pounds of clubs on my shoulder.  Especially when I only use three of them.

And, to me, a walk in the grass is seriously undermined by having to watch out that I’m not knocked unconscious by errant golf balls flying from other parts of the grass over to mine.  I do love the lingo – “your honors,” “sliced,” “hooked” and “in jail.”  That last description – of being among too many trees to possibly hit the ball out safely – was one I used all too frequently.  It’s one of the reasons I am no longer a golfer.

The first time I took my wife to a driving range – at her request, by the way – she was lining up what was to have been a mighty 75 yard drive.  Then, she looked up at the person in the next stall and turned to me with a look of astonishment.  It was O.J. Simpson.  “He really IS searching for the killer on golf courses!”  I don’t think practice swings were the same for either of us after that.

As for me, my drives wouldn’t drive, my chips wouldn’t chip and my putts puttered out.  But enough about me.  Let’s get to Bill Murray.

Murray’s character – assistant greenskeeper Carl Spackler – is dim-witted and of the opinion he’s a good golfer.  Those are two qualities that go together like a golf cart and a cooler of beer.  His efforts at eliminating the destructive gopher – with extreme prejudice and a lot of plastic explosives – leave the country club course looking like a nine-hole track in Palm Springs in the middle of August.

Murray’s lines in the “Cinderella story” scene are said to be completely improvised.  Taking practice shots on the flowers were his idea, too.  Pairing a wine with “Caddyshack” is my job.

Canadian golfer Mike Weir owns a wine estate in the Niagara region.  A Masters champion would have ice wine running through his veins.  By the way, Weir also uses his line of wines to raise money for the Mike Weir Foundation, a charity that assists children in physical, emotional or financial need.

Other golfers with a drive for wine:

Greg Norman – The golfer known as The Shark makes a whale of good wine, be it California or Australia.

Ernie Els –  The South African golfer naturally chose the burgeoning wine region in his homeland as the base for his wines.

Nick Faldo – Australian wine from the Coonawarra region, for when you run out of Foster’s.

Luke Donald – Terlato does his Napa wines, the same outfit that fashions high end wine with Mike Ditka’s name on it.

Arnold Palmer – Napa Valley’s Luna Vineyards makes wine for the guy who has an iced tea drink named after him.

Annika Sorenstam – Lest we forget the LPGA, this golf wine comes from Wente Vineyards in California’s Livermore Valley.  Annika shoots in the 70s; her Chardonnay shot a 92 in Wine Spectator.