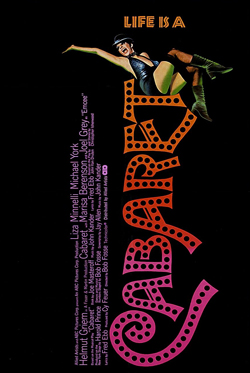 They say tense sets often make for good movies and Cabaret is no exception. Desperate for a hit after the flop of Sweet Charity, director Bob Fosse rode herd on the cast, especially Joel Grey, who originated the role of the creepy Kit Kat Klub emcee on Broadway but almost lost his Oscar-winning part in the movie to Fosse’s initial choice….Ruth Gordon. At one point Fosse spitefully reduced all Grey’s musical numbers to snippets (the producers put it all back). The finished movie won eight Oscars including Best Director for Fosse and Best Actress for star Liza Minnelli, who never had a better role. Christopher Isherwood’s “Berlin Stories”, which introduced the character of Sally Bowles, had been filmed as a straight drama in 1955 under the title I Am a Camera.