A lengthy talk-fest interview of the underrated filmmaker, who takes us through his life story as a personal journey, not a string of movie assignments. Sidney Lumet seems to attract a lot of criticism, and so did this docu for not challenging his opinions or rubbing his nose in his less admirable movie efforts. The docu is just Lumet’s thoughts, and the words of a man of integrity are always inspiring. 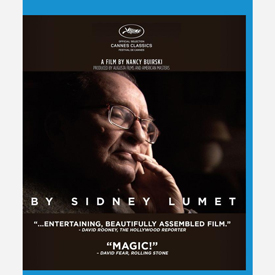 This ought to be a good year for documentary filmmaker Nancy Buirski. I first caught up with her excellent feature docu Afternoon of a Faun, about the ill-fated ballerina Tanaquil Le Clerc, and she’s had other successes as well. But her 2011 docu The Loving Story provided the basis for this year’s well received Loving, for which Buirski was one of the producers. And from just last year is this new documentary on one of America’s most interesting filmmakers.

By Sidney Lumet is about as simple as a documentary can get. It’s basically a single camera angle on career film director Sidney Lumet, interposed with abundant clips from his movies. The clips are selective and tend to group around his favorite pictures, not always his most successful: 12 Angry Men, Long Day’s Journey into Night, The Pawnbroker, The Verdict, Daniel. It’s not a, ‘then I did this’ movie, and Lumet doesn’t talk up all the famous people he’s worked with, just individuals like Henry Fonda, who produced the first movie Lumet directed. It’s more a portrait of a man taking on the question of what he’s done with his life. Lumet begins with a moral statement saying more or less that he didn’t set out to make stories with moral messages, but as he simply brought out the honesty in the characters and their problems, the moral aspects of the story being told rose by themselves. An early credit names a Steven Spielberg project called The Righteous Persons Foundation; and in some respects Sidney Lumet is attesting to his value as a responsible American Jew.

Only about ten years ago did I discover that Sidney Lumet had been an actor for decades before he became a director. He was raised in a New York Jewish family steeped in the Yiddish theater tradition. With great affection but also a realistic perspective, Lumet talks about the massive Jewish neighborhood theaters that once existed, and of working for and with his father Baruch Lumet from an early age. We first see Lumet in an independent social protest feature called …One Third of a Nation which was released by Paramount; Sylvia Sidney stars and fifth-billed Sidney, at age 14, plays a slum kid endangered by appalling housing standards.

The socialist drive in that movie illustrates Lumet’s unflinching interest in fairness and social justice, which comes through in many of his pictures. Without ever saying so, Lumet seems definitely to be reacting to criticism that said he never established a personal style or built ‘a consistent body of work.’ People who count Oscars note that he’s never won one in competition, and Lumet does seem a bit defensive when he explains that awards were never a major goal. With the pragmatism of a man whose father won and lost several fortunes in risky theatrical ventures, Lumet’s goal was always to keep working, to keep doing the best job he can. An award or a nomination was insurance that a next job could be obtained — one hit allowed a director to make three flops. That’s surely no longer the case now. 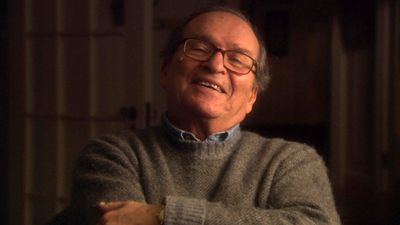 Although Lumet does come off as defensive once or twice, he’s also completely honest and candid, hiding nothing. He prides himself on his judgment, yet takes pains to explain that at times he was no beacon of courage. He relates a story from when he was in the Army. On a troop train in India he saw a group of soldiers gang-raping a child. All his life he’s questioned why he didn’t do anything about it.

Well, how many people would? Lumet explains that he never the kind to take on great liberal causes such as joining Civil Rights gatherings. Just being a Jew from New York with liberal tendencies made him a target for the HUAC, a problem he probably avoided because he wasn’t a ‘joiner.’ But he did put his liberal values into his movies. He was particularly able to reach audiences with movies like 12 Angry Men. He remembers screenwriter Reginald Rose as also exiting live TV for features on that show. Yet Lumet has a skeptical attitude about some liberal writing. In the Henry Fonda deliberation room, one jury member is revealed as an unregenerate racist. Lumet says that he felt that wasn’t accurate, that a sampling of twelve New Yorkers would have come up with at least six.

That’s something refreshing to hear in this age of liberals who either want to be loved or that aren’t sure what they believe in — Lumet comes right out and states that our America is and always has been up to its neck in racism and bigotry, even more than the general human condition. By Sidney Lumet begins and finishes with short and effective moral position statements, and they’re grabbers. There’s nothing phony about the man.

We do get some insight into his pictures, and a few observations that I read in his (very good) 1996 book about filmmaking, Making Movies. He’s very proud of his two ‘eighties pictures about radical activism, Daniel and Running on Empty, the shared message of which is, “the children of idealists must bear the burden of their parents’ commitment.” I’d say that the second picture Empty illustrates Lumet’s claim of moral neutrality, but Daniel by its nature wears its social messages on its sleeve.

Most of the clips illustrate a point, and only a scene from The Wiz seems misplaced. It’s a terrible film, and the director’s observation that Dorothy’s ‘no place like home’ sentiment doesn’t transfer well to the urban experience just seems trite. What he’s really saying is that he felt zero connection to the material. The Wiz must have been even more of a paycheck assignment than Lumet’s (entertaining) Agatha Christie movie.

We hear a lot about Lumet’s time as a TV director, where he was able to cram a career’s worth of experience with actors and problem solving into a single year. He’s also big with theatrical adaptations and makes a strong case that he never merely filmed a play. We also get a look at the breadth of his work, from a tense doomsday story to a payday Agatha Christie who-dunnit with big stars to his last film, the unashamedly theatrical Before the Devil Knows You’re Dead. The drawn out courtroom speech in the Paul Newman picture The Verdict is the only clip that seems shoehorned into the docu’s overall argument — that character’s moral position isn’t the same as Lumet’s.

A great deal of Sidney Lumet’s work is not mentioned, but as I said the show isn’t a rundown on his career film by film — we don’t get into movies that were considered mistakes, like The Group (one of the few Lumet pictures that looks ill-judged almost all of the time) or The Anderson Tapes (which I’ve always liked quite a bit). Clips from a film with Sophia Loren and another with Marlon Brando are in there. Some of the clips do run a bit longer than they should.

Perhaps the best explanation of Sidney Lumet’s personality comes when he reaches The Pawnbroker. The difficult thing with a movie about the Holocaust is that it’s far too easy to trivialize the subject — which has happened more often than it should. Instead of using real film clips, Lumet concentrated on salient details of the horror of captivity. He explains his method of introducing a long-suppressed subjective memory. A flashback begins as a memory-flash of only a few frames’ duration. But more flashback snippets break through, and grow in length until memories of the main character Nazerman (Rod Steiger) take over his consciousness entirely. On film, a pan around a N.Y. subway car is match-intercut in this way with a similar pan in a stylized memory-vision of a cattle car transporting Jews to Auschwitz. It works beautifully without dialogue to express Nazerman’s complex psychology. Sidney Lumet used ‘clever’ cinematic devices sparingly, but when he did they were more than effective.

Mr. Lumet passed away three years after this interview was recorded. He looks to be in fine condition and his mind is as sharp as a tack — his speaking voice communicates the same sincere character as came through in his book. Someone needs to be congratulated for getting this major interview in a timely manner.

FilmRise’s Blu-ray of By Sidney Lumet is a handsome if simple encoding of this good interview, with excellent sound. Except for a couple of cutaways that vary the angle, it’s all exactly the same view. We’re of course impressed by Lumet’s ability to recall his thoughts and organize his speaking points with almost zero hemming and hawing. He’s surely been formulating his ideas and opinions for years, but he doesn’t deliver them like rote speaking points. Once an actor…

The weakness in the docu is the film clips, only a few of which are top-quality. A number are simply from inferior masters. We don’t expect a modest docu to spend the money to remaster entire films, but most of the HD clips are indifferently encoded — they look compressed — and a few of the less popular pictures (Like A View from the Bridge) are borderline unacceptable. That Kind of Woman looks like a bump-up from a PAL tape where the frame-rate hasn’t been straightened out — the action chatters as Sophia Loren runs down a train platform. Knowing how difficult studios are when licensing their wares, I sympathize. And we’ve come to hear Sidney Lumet speak. But the overall weak film clips here do the presentation no favors.

The audio for the interview is excellent. For extras we’re given a trailer, an interview with actor Treat Williams of Prince of the City, and a selection of additional Lumet interview excerpts, which are really worth watching.