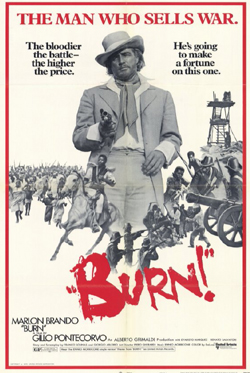 Director Gillo Pontecorvo followed up his neorealist masterpiece The Battle of Algiers with another complex anti-colonial film, this one involving a slave rebellion on the fictional Carribean island of Queimada circa 1845. Although his relationship with Pontecorvo was a rocky one (what else is new?), Marlon Brando considered this one of his finest performances. The only trailer we could find on this was French, which is presented like the credits sequence in a spaghetti western, basically music driven — and Ennio Morricone’s stunning score is one of his greatest.